Here’s my latest creation, and I’m having so much fun with this style. It’s a way of working I started decades ago, but which was beaten out of me, metaphorically speaking, in art school. If I were in art school today I don’t think I could get away with churning out this sort of work. In the past I used charcoal for these sorts of experiments, but now I use the computer, the main difference being the computer is much more flexible, my hands don’t turn black, and I don’t have to vacuum when I’m finished. In the past I would have used charcoal and an eraser, and that’s it. Now I just use one brush in Photoshop and switch between black and white, and sometimes toy with opacity a bit, and I have a couple other tricks up my sleeve to help my imagination. But it’s Photoshop 101 in terms of complexity regarding the computer, and 99% pure drawing.

I’m sure anyone could attempt this method of working, but the results would be all over the place. You make some marks, you look, you accentuate some things, flip it, rotate it, look some more, image in a bit, come back to it, see what it suggests to you, and so on. Of course it is very helpful if one knows how to draw forms, knows perspective, anatomy, lighting, and so on, though those are not necessarily evident in the result.

What makes this kind of work so fun for me is there’s really no boredom in it, no going through the motions of executing a preconceived idea, no rules as to how things must look, and I am always exploring, experimenting, testing, and just mucking about with it until it resolves itself to the point where I’m satisfied. I never know what I’m going to get until I’m done. It’s all process.

But there’s something more, and perhaps more important right now about this kind of work, which I am also addressing in an article I’m writing about the Symbolist/Expressionist Alfred Kubin. And this thing is the specter of non-verbal communication and content. Anyone, regardless of their native language can look at this, and I dare say it might operate on them in a way that just can’t be wrangled with using words or the rational intellect. This may be true of all visual imagery, and that’s one of the reasons I’m such a stalwart defender of visual art, but for me (and this may just have to do with stylistic preferences), it is often works that use the imagination more, or require the audience to engage their imagination (hence the title “Looking With the Inner Eye” applies to the image as well as the audience) that do this most. Did you find the monitor lizard? The goat head?

I thought about putting this in color, but as the image is already complete, that becomes a comparatively boring act of filling it in, and isn’t part of the process of discovery. That’s fine, and something I do regularly in other kinds of art, but for this style probably the best way to work in color is to start out in color. probably the beset instance of me doing that is the following image:

I’ve argued recently that visual art acts as a checks and balances against the tyranny of spoken/written language (as does music), and that which can be rationally concluded. Unless we are talking about poetry, or rather lush fiction, writing and thinking customarily operates within the arena of rational discourse, and within that using a grammar and vocabulary we’ve merely inherited. I’m not knocking that, but it is not the only measure of reality. And right now, and in much of my lifetime and my art training (grad school in particular), the purely visual has been subordinated to the word in fine art. Much of contemporary art needs to be accessed via a placard adjacent to where the work is presented, and the writing about the work by critics can be seen as necessary to justify the work as important. On top of this, contemporary art is widely expected to function as weapons or props or medicine in a political agenda, which must necessarily be inline with specific leftist beliefs. Any art that espouses the wrong political conclusions is considered vile garbage. This is further occurring in a climate of increased censorship and punitive measures against artists who are insufficiently politically correct. The art is, again, subordinated to the word, which seeks to categorize it, compartmentalize it, and contextualize it within a greater scheme of presumed social progress.

This is all fine and good for artists whose artistic commitment is to social justice. But, increasingly, all art is filtered through this same strainer, in which case art cannot be an antidote, an escape, an alternative, or another mode of cognition. All is reduced to an argument within a cause couched purely in verbal/written language.

An artist has to be extraordinarily careful what she or he says or makes or paints… Any wrong move and you are the sworn enemy. I’ve written extensively about a few recent victims of this radical ideology, but I won’t even mention names now, as I’m moving towards disengaging myself from that whole spectrum of art-think, which I am finding increasingly toxic (and I dislike that word enough that I use it with real hesitation).

In this sort of image I not only have freedom of speech, but also freedom from speech. I’m probably the only person to put it just this way, though I’m sure many have argued similar things in the past, if not currently. I can draw things I wouldn’t dare say out loud, perhaps because they are too personal, weird, controversial, dark, or because I don’t even know what they are really about, as there is so much of the unconscious/subconscious revealed in them. Maybe there is no meaning or interpretation that can be articulated, because the images are manifestations of cognition that is outside of the verbal repertoire. You have a composition, patterns, textures, illusionistic space, figures, a certain aura or feeling. An alien species could find such a drawing and ponder it.

It is an image, not an argument. And with this style I can be as wild and spontaneous as I like. I don’t know if it reaches others, or if they will just say, “meh”. Does it bother them that the cat head’s teeth are just suggested and I didn’t articulate each incisor? Does there need to a be specific interpretation so we know if it is on the right side of history, so we know if it’s safe. I don’t know for other people, but for me the whole appeal of this sort of image is that it can’t be pinned down, filed, reduced to a sentence or two. The net of rational thought cannot capture it. It’s a fleeting vision photographed but still too elusive to imprison in ideology. You could say it’s an escape from reality as fixed by rational discourse, or you could say it’s a submersion in reality outside of those confines.

Here are 11 similar pieces I’ve produced so far, and no two of them are really alike.

Here’s all 42 pieces in the series, which are all images done exclusively from my imagination, and unpremeditated, so far in a slide show.

Or, if you prefer, you can see them in a click-through gallery: 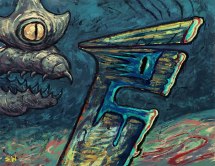 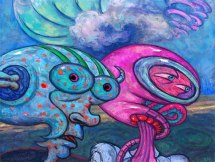 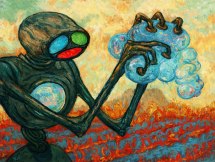 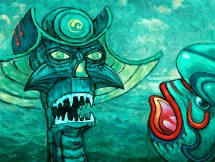 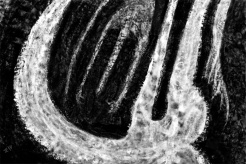 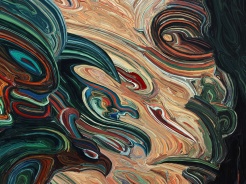 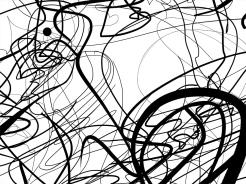 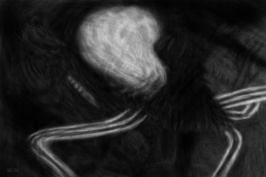 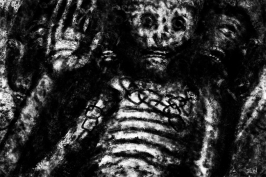 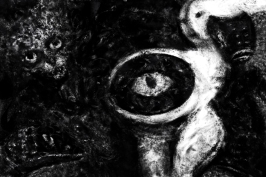 To see other posts about other pieces in this series, go here.

See a video about my first 25 pieces in this series here.