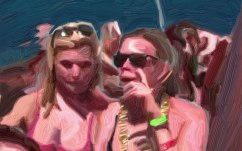 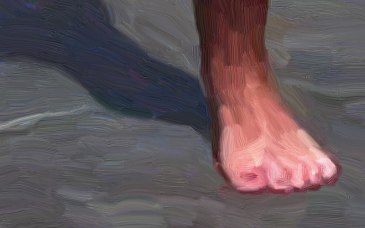 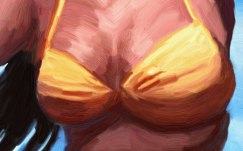 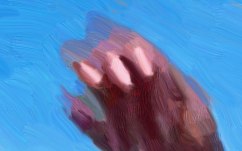 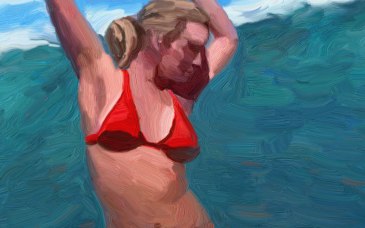 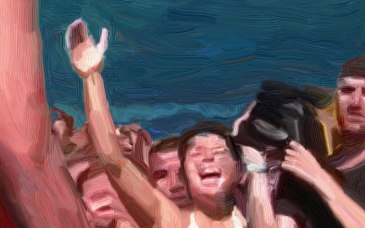 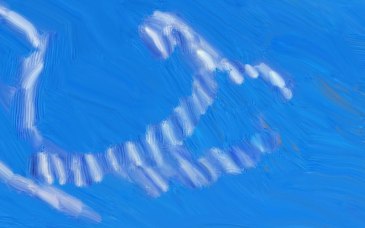 There are different ways of making new art. To me this means to make a new image, something that doesn’t already exist, or isn’t just a variation on an overused theme. Many artists accomplish this by not doing it at all, but making some other sort of art that isn’t an image (conceptual art…). But to me, the image is the core of visual art, and making a new image is the central challenge. This can be attempted in a number of ways, including through style, mediums, method, and subject matter. In this image I was trying to incorporate subject matter I hadn’t seen rendered in a fine art context, which I also did in a style that requires computer skills and traditional skills.

As I mentioned yesterday, no I didn’t just take a photo and slap some cheese-ball Photoshop filter over it. Personally, I think those filters look unconvincing, and once you catch on to what they look like, the mind dismisses the effect as technological gimcrackery. On the other hand, those who categorically dismiss art done on the computer focus too much on material, and too little on vision. Surely, if Leonardo da Vinci were alive, he wouldn’t turn up his nose at new avenues of image making, and insist on comparatively barbaric tools.

If I just used a single photo, it would look something like the following, which is a screen shot of the dancing girl in the forefront. Aside from having a giant logo on it from the website of whoever shot the video, the sky is a bit grey, her feet are cut off, and it’s not an interesting composition. Notice, if you scroll back up, that I put feet back in, changed the color of the bikini, added hair for movement, and completely changed her left arm. What I particularly liked, incidentally, was her right hand, which seemed to claw at the air.

If I had used just a single photo and applied a cheese-ball Photoshop “oil paint” filter, I would have gotten what you see below.

To my eye, the above image doesn’t look very good, and definitely looks like someone just played around with filters. Compare a section of my final image with the easy technique of applying Photoshop filters to a single image.

Yes, I wanted to lure people in with bikini babes striking poses. It can be frustrating when any snap of a babe gets hundreds of times more hits than ones best art. But don’t be fooled by the “beach bunnies”, because as soon as one notices the giant, looming wave, one might realize it’s more complex than it at first appeared. You might take time to notice the 3 shadows, which add their own perspectival dimension to the image, as does the yellow and black striped tape. The easy conclusion that this is a just a sexist photo of girls is belied by there being women in the audience (in which case the omnipresent “male gaze” is also conspicuously the “female gaze”), by the girls dancing as if doing so empowered them, and more importantly by the painterly strokes that remind us we are just looking at pigment or pixels, and no real women are involved. I find particularly interesting that people focus on the girls to the extent of missing, or sidelining that there is an enormous wave barreling down on them, and everyone in the picture is likely about to die, or at least have the swim of their lives. By the way, a giant wave was a recurrent nightmare I had as a kid.

The piece is largely about contemporary popular culture, and internet culture in particular. This has “YouTube” written all over it, and is more a comment or reflection on the window of that culture than on gender roles, the objectification of women, women’s expression of sexuality, or any of those other sorts of politicized issues, though they are all there. The wave for me is the omnipresent threat of global warming, and the college kids at Spring Break are reveling in their independence while the future looks ominous. I’m not faulting or criticizing them – they are entitled to fun – but I am putting it in the context of the time in which we live, and the peril we face. The wave tells us there’s definitely something wrong, even while the vacationing students are exulting in nature, which the deep blue sky and clouds accentuate.

The viewer is positioned as a privileged member of the audience, who can also see the wave that most of them are not facing. The hand at the right reaches out to the girl whose booty takes up a good amount of the real estate of the canvas, but we don’t know if the hand (male or female) is reaching to warn, touch, or try to remove the girl’s top. From our vantage point, we’d better run for our lives. Do we try to alert everyone first, or just scram so as not to get trampled? This is split decision emergency time, so, you can’t just keep checking out the girls.

In the picture below notice how small the men with the umbrella are in comparison to the wave. They also look like they figured out they were in trouble.

The complete image, again, below.

6 replies on “Background on “Swell with Bikini Dancing Girls””