Imagine That #52: The Monster In The Mirror

The third in the series, and I sat on this one for a long time. There were some technical difficulties towards the end, such as in making the monster’s appendages persuasively symmetrical (working anatomically and compositionally). If I share an earlier version, you’ll understand why.

Below you can see I’d drawn in a couple appendages — a mantis type arm, and a sort of spiked horn — on the left side of the monster’s head. I got rid of the two long insect-leggy appendages in the front, but had to manufacture a matching set of the other ones for the right side. That’s a rather difficult feat of anatomy, perspective, and lighting. 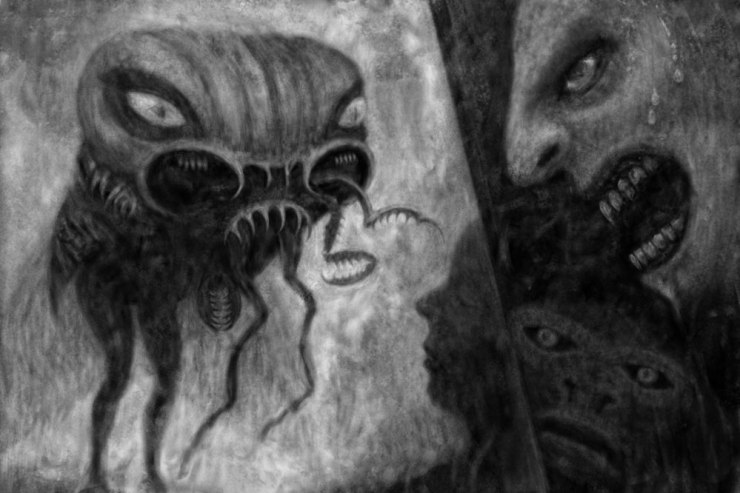 If I’d planned this image, I would have roughed in all the elements on the front side, but it’s completely unplanned. This is part of why the series is called, “Death’s Dream Kingdom” (which is a quote from T.S. Eliot’s “The Hollow Men”, though I don’t use the identical meaning). The imagery wells up from the subconscious, and through accident, though it is very consciously manipulated. That said, there’s a curious phenomenon, in which I can listen to audio books or even philosophy lectures while working on this kind of  art, without missing a beat, because, I gather, the two activities use different parts of the brain.

And that should tell you something interesting, which is that the imagery is non-linguistic, otherwise there’d be conflict, and I couldn’t concentrate on both things simultaneously. And, this also means that when you look at it, you are not accessing or understanding it through linguistics either. It’s happening via visual language, and your imagination, and your subconscious… And politics, as in this or that agenda, which art is so devoted to hammering home these days, is in that sense completely absent. There’s no didactic, polemical way to read this image. Those who need the correct moral standpoint will have no footing, unless they can somehow go outside the boarders of the image and implicate the artist into some political framework (which would necessarily be negative).

Incidentally, I’m so sick of art being crammed down my throat because it has the proper political message that I’ve now come to think that politics must be considered completely separately from the art, or is irrelevant, and that what we should really be looking at is the inherent quality, whatever the message.

In my articles about abominable ideas in art, I’m planning a feature on the ever-popular idea that the purpose of art is to “ask questions”. Well, that happens in linguistics. It’s as bizarre a take on art as seeing music as asking questions. Usually, amusingly enough, in a tragicomic sort of way, the question art asks is, “it this shit even art?!” Sure, art CAN ask questions, but that job might be better left to mediums much more adept at doing so, such as ones that use verbal language, and can quite literally, sufficiently, and very accurately pose questions.

Is there any value to the kind of art I’m making here? From a contemporary art standpoint, well, it’s completely irrelevant (it doesn’t ask questions). And yet it is a kind of complex and intelligent communication, or vision, operating outside of linguistics. If one wanted to, there’s quite a lot to interpret (though the interpretation is anything but the meaning, which cannot be put into words any more than a pizza can, but is a visual experience).

Let me just point out a few things you might not notice at first. Here’s the image again, flipped for variety. And I do work on it both ways so much that it doesn’t really matter to me which way it’s seen, though if I have to choose one it would be the opposite of below. Now for things to notice. Or maybe not. I do like it this way, too. 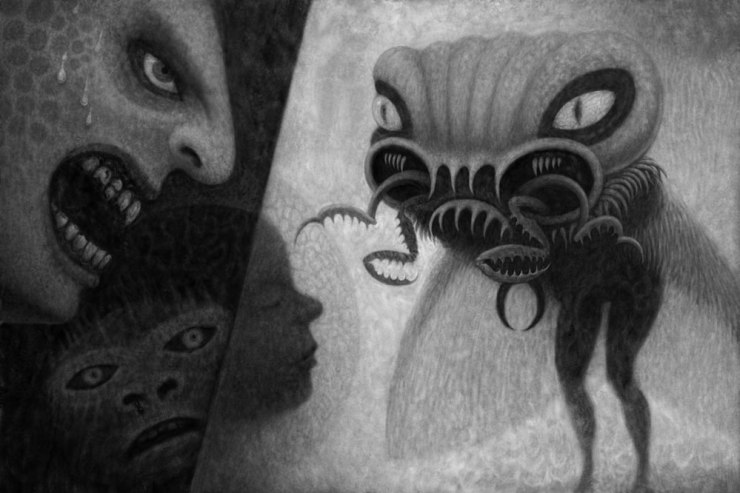 Notice that the head in profile that is diagonally cut by the edge of the mirror actually continues into the other side. You can see the outline of the top of the skull, if you look carefully. The angry male figure, then, is biting the back of the skull. His eye, by the way, is on the side of his head rather than the front, which gives him a slight rodent quality.

If you didn’t already see her, there’s a vague standing figure between the monster and the edge of the mirror, right next to its eye.

Also notice that the whole thing is sort of wavering with scintillating textures. There’s the veins in the membrane, or in the alien’s eyes. There’s the texture of the wings with the light coming through it. There’s the circular depressions in the skin of the man’s head. There are waves like heat rising up from around the monster’s ankles. Those effects give is a sort of Impressionist feeling, though as if it were done in pencil.

The most obvious reading is that the angry man (who doesn’t have much of a forehead, so is likely quite a brute) is glaring at the “monster” in the mirror. This can also be seen the opposite way, so that he is the “monster” and the conspicuously female figure is not. She could just be a woman carrying a mask, a bit similar to the dragon head a Chinese dances, in which case she’s not a monster at all.

Additionally YOU are looking at the image, which is a mirror for you (or more specifically me, as the artist). The somewhat simian figure in the middle is looking at the viewer, in which case from his perspective, you could be the monster in the mirror.

The center figure bisected by the edge of the mirror could be dreaming, or is otherwise in both sides, or dimensions. I’m not really sure the gender of that person, but since the other figures on the right are female, I’m leaning towards it being female as well. One of the horns of the winged, insect monster is piercing the balloon-like membrane her head is in, and tapping her forehead (not actually, as the horn is in the background, but if you look at the image flattened).

On top of all that one typically sees oneself in the mirror, not something else, so there are multiple, overlapping readings.

There’s a lot to ponder there, but the real content is just the impression that the vision gives, and the aesthetics, and NOT the reading of it, which, again, takes place in linguistics. 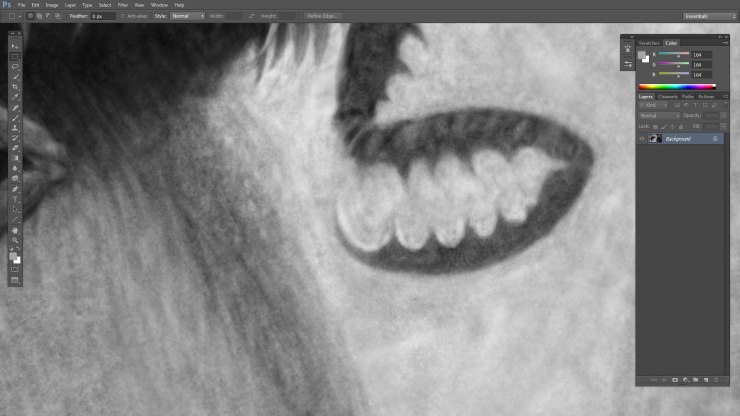 For these pieces I refuse to use any references, or anything outside of just my imagination, memory, and drawing skills. It then becomes a more unique kind of self-portrait, in a way, in that only what I have in my psyche is manifested. Recently I did my Selfies From Alternate Universes series (to #30, but I could do a lot more), which are external portraits. This is more uniquely my own, because it is more of a portrait of a mind.

Ultimately, the result is more important than the process, but I use this process in the hopes that the result will eventually be uniquely interesting. There’s something important about only using what I can imagine myself, and what I can render, without even looking at anything else. There’s no cheating, but that’s an ancillary element. I think the main thing is that it only really shows one individual’s perspective.

Consider, for example, your own dreams. Imagine if upon death you entered a hypothetical dream world where you just endlessly existed within your own dream world. The only things in there would be of your own imagination. And this is true of every dream you have now. Every experience, and every visual, is created (or re-created) by you (though based on the exterior world and your senses). it’s amazing to me that the imagination is so powerful that it can capture us and surround us in a convincing world. Even if in our daily lives some of us think we have no imagination, our dreams prove otherwise. How does our imagination create things like planes and cars on the fly, seemingly realistically, that we would really struggle to draw at all in a waking state?

One of the techniques I use here is using visual suggestion to ensnare the subconscious into imagining more of it. I’ll just look at something until I see a que, and then I’ll draw it. And thus the image will slowly manifest from various suggestive smudges into a full-fledged image. The point of all of this is that one can better render ones own private world if one relies only on ones own imagination, unaided by photos, or even necessarily standard drawing techniques. For some this sort of process, and the result, could be meaningless fluff. But I think there’s a richness there, and a certain quality of visually documented imagining. It’s a bit like a drawing you might see in a dream.

It is the opposite of appropriation. I am 100% responsible for every stroke of the image. Note that both Koons and Hirst say that their hearts and minds are in every stroke or motion behind the creation of their art, but THAT is absolute bullshit. I didn’t hire anyone to reproduce something by yet someone else. I’m not making these as any kind of reaction to contemporary conceptual art, but rather just completely independent of it, and this is a style I developed decades ago, and originally executed in charcoal or other physical means.

The last thing I’ll mention that I’ve been thinking about is how other people access images like this. They have to do some of the work themselves. You have to be receptive, and you have to know how to look, and ponder the visual. It’s not going to happen in the split second it takes to swipe to the next image in Instagram. It sinks in slowly, and rewards a longer view.

Here are the first two in the series, if you missed them.

It might be good to see all three together: 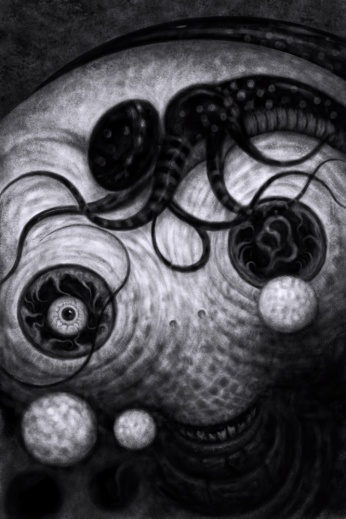 And if you like my art and art criticism, and would like to see me keep working, please consider making a very small donation. Through Patreon, you can give $1 (or more) per month, and I really appreciate my $1 patrons. Ah, if only I could amass a few hundred dollars per month this way, I could focus entirely on my art. See how it works here.

4 replies on “Imagine That #52: The Monster In The Mirror”