How to come up with more creative creatures

I’m working on developing a bat-person for the next of my more illustrational images, like my Ant Man. Normally, at least up until recently, I’d only do one drawing, and just have at it until I was finished. There’d be tons of editing, tweaking it out, and learning from mistakes, trial and error. But I’d be essentially running with the first idea I hooked onto. That works well enough, but there are some simple preliminary steps I could take to help generate a more original creation.

The first thing I did was download a bunch of pics of bats and put them in a folder. Then I studied them a bit. I noticed their ears almost always have striations in them, the noses could take any possible grotesque configuration, and the molars were often double-pointed like  twin mountain peaks. I tried to grasp the angles and perspectives of their open mouths. Here are some examples. 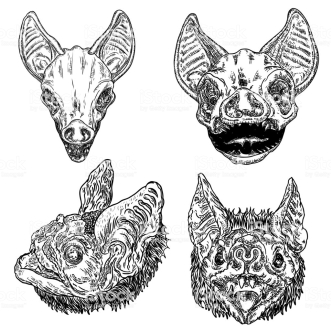 There were also a couple masks that were quite good, and also let me know what’s already been done before, and hence doesn’t need me to do it again. These, as good as they are, are a recipe for what not to do. 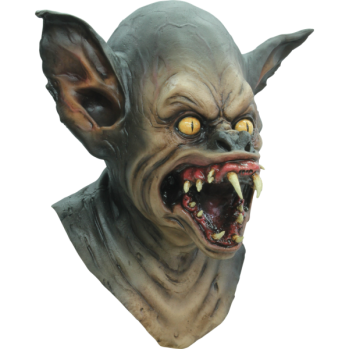 So, I don’t want my bat person to be a sort of blood-thirsty demon out of hell. Neither mask uses the large, decorative noses bats have, and both exaggerated the size of the mouth and teeth. The eyes are on the front, as opposed to the side, and both have a very large dome-shaped top of the head, which is completely unlike a bat. Pink, which works amazingly here, is sorta’ taken, as is the army green. I’m thinking I’ll go rich beige colors. They also both look male, despite the one being pink.

This is the most important part because the idea is to not repeat yourself, in which case you try out some different possibilities. My sketches were just 5 minutes each, so all six took about a half hour. That’s time well spent if I then have a bunch of ideas to work with. Note that it would have been easier to sketch with pencil or pen on paper, because it’s much easier to draw by hand than with a stylus and tablet, but it was still more efficient to do everything digitally.

Normally, I’d draw the creatures at a 45 degree angle, or experiment with other angles. But here, I’m not doing that because I want to be able to combine different sketches, and so it’s better if they are all front and center (and if I can draw it three-quarter view to start off with, I can transpose it to three-quarters later anyway) .So, for example, I could do something like this:

I don’t think I would have come up with the center bat, above, without going through this process. It’s a feminine bat person, with eyes towards the sides, an ornate nose, and a large but not grotesque moth. The ears meet in the middle, and it doesn’t have a bulbous head. I could bat up the ears more, and they could even be semi-transparent, which would be much harder to do with a mask than a painting (if it’s backlit, I can have warm light coming through them).  This mixing and matching stage can be a bit time consuming, but it’s also fun. One could take from more than two sketches, obviously, and resize parts as well.

One can also simply overlap the heads to see what happens. Here are a few examples of doing that:

I noticed that a lot of digital painters use the new Photoshop mirror function to draw a half a head and have the other half appear in real  time. I can’t do that with my version, but I find an older technique I used to do with tracing paper when I was a kid works even better for me. This is just to make a sketch, then flip it, and overlap it onto the original. Now both sides are the same, but there are new variations, and because it’s perfectly symmetrical, it’s easier to combine with other sketches as I did above.

I’m planning on making three composite versions from the 9 sketches. I’ll choose the best one, and then draw over it to make changes. After that, I’ll use the basic design and make a version that is off center, at more of a three-quarter angle. I don’t want it to be just a head, so I may put part of a bat wing in the background, and a bat hand in front. I have an idea for more content, but that can wait until later. Here, I’m just generating ideas so I dont’ make the same old zombie bat man that is the industry standard (however cool).

Stay tuned to see how this develops

And if you like my art or criticism, please consider chipping in so I can keep working until I drop. Through Patreon, you can give $1 (or more) per month to help keep me going (y’know, so I don’t have to put art on the back-burner while I slog away at a full-time job). See how it works here.

14 replies on “How to come up with more creative creatures”