Google Deep Dream Getting Too Good

Google developed an artificial neural network to interpret imagery.  At first I was modestly intrigued, but now I’m starting to see the threat it poses. Essentially, it’s a filtering process that starts with easy stuff like detecting edges, then shapes, and moving on to identifying what is being seen. The neural networks are honed by exposing them to volumes of images, such as of animals, trees, or buildings, so that they are better able to search for the common features of those subjects. The aim was for a computer to look at an image and be able to say something like, “That’s a golden retriever”, or “That’s John Connor…”.

That is already interesting, but the Google team discovered that the process could be reversed so the neural networks would generate images of animals, trees, and so on, by asking them to enhance the features they were looking for. The result is something like seeing images in clouds or while tripping balls on acid. The computer sees things that aren’t there, and renders them.

The neural network can even repeat the process on it’s own rendered images, in a sort of feedback loop, so that it refines the dogs, or whatever, that it has created itself from anything that remotely resembled a dog. And on and on.

What we get are very psychedelic images, and some of the more hi-rez images produced are not just weird, but beautiful. People everywhere were asking where they could get prints, and now you can even upload your own images and get them filtered through the algorithm here. Below is a gallery of some of the better examples I’ve found so far [Also included at the bottom of the post so you can click on them for the full-sized versions]..

This one has great detail and color. Unfortunately, it was a nude image, so I am just showing the upper cropped part.

With the right music this is a good trip.

A portrait from another planet? This is just another example of something a human wouldn’t do. There are hippo-snails slithering among horse-shoe crab shells in a DMT trance.

The antennae! The mysterious goblet on the right! I want a print of this. 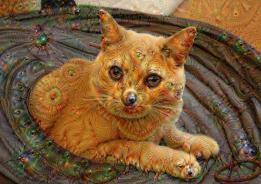 A cat with dog-head paws, a dog-head nose, and bird ears.

The algorithm creates it’s own universe, as if consciousness slipped into another dimension where the conventional laws of physics and biology don’t apply.

I would hang this one on my wall. The algorithm doesn’t seem to know how many legs or eyes or heads an animal has, but it does understand that they all need to be connected, er, in a mutant dog galaxy.

Combined with fractals, the algorithm here made some wonderful fish/amphibian/reptile stones.

A dog made up of dogs

Love the spider on a skiff, the bird-like buoy , the alien sky, and the modern skyscraper.

Treacle toffee world is my world (with dogs and caterpillars and psyche-eye wallpaper.

This tragic mutant reminds me of the dog in The Fly II. 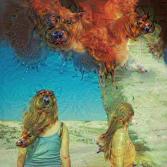 Say what you want about the algorithm being mindless, but this is a beautiful piece of Surrealism!

So, what’s kinda’ scary about this? The Chess computer Deep Blue defeated the world Chess champion Gary Kasparov, for starters. And this pretty much killed the game for me. Imagination and creativity aren’t an asset in Chess anymore. Sheer, brute, calculating power is the unassailable winner. But that would never apply to art, or so I thought. A computer isn’t alive, isn’t conscious, doesn’t have an interiority, no feelings, no fears, no love, no anger. A computer doesn’t give a shit. How could it make art or write a novel without any passion or compassion?

[While you’re here, take a look at some of my human-based art. Scroll deep and expand your visual horizons.]

I still think I am right about that, but the danger is that a computer could fake it. And if it could do a pretty good job of it, one might need to be a genuine connoisseur to tell the fake art from the real thing.

What if instead of being trained to recognize dogs, or buildings, a neural network were fed super hi-rez images of the mature style paintings of Monet, Van Gogh, or Picasso? Let’s just use Monet landscapes. Let’s say the algorithm is refined to identify Monet paintings, and even fine tune it by teaching it to differentiate them from landscapes by Pissarro, Renoir (he did some), and other of his contemporaries. It might start making some good facsimiles. To kick it up further it needs to be fed up-close details, and know that’s what they are, so that it can search for and thus generate characteristics of Monet’s brush strokes. We could then look at where the computer falls short, and tweak out the algorithm. It could be combined with neural networks that are developed to recognize all the kinds of subject matter in Monet paintings. After the computer has analyzed hundreds of Monet paintings, and thousands of haystacks and sunsets, it might learn to compete with the artist at his own game. It might be possible to go on to mix and match artists to get the neural network to develop a new, hybrid style. And what if this algorithm could be combined with the one that is designed to detect creativity in visual art?

Oh no. I just thought of something. If instead of dogs and eyes and whatnot that the algorithm was refined to decipher, and thus could be reversed to create, what if images of sexy women were used? Or porn? I’m sure the results would be sometimes horrific, and sometimes titillating, and often combinations thereof. If an artificial neural network can create dogs out of nowhere, it can create boobs, and thus reach a massive audience. I’m half joking, but I can’t be the first one to have thought of this. There was already the strange effect where an algorithm was tasked with generating dumbbells, but incidentally created arms to go with  them (because it’s view of dumbbells was based on images, many of which included arms).

I’d want to feed the program images of aliens, then have it go looking for them and inventing them. The possibilities could be fascinating. I’d actually love to work with the people that developed the algorithm to explore the more creative possibilities for realizing unprecedented imagery. The artificial neural networks will think of possibilities that we humans would not, and perhaps could not.

Even without any specific attempts to rig the neural networks to deliberately make fine art images, the accidental oddities created by Google Deep Dream are already getting more attention than the visual art of any contemporary artist. It unwittingly created its own style, which has captured the imaginations of viewers around the world. Using big data a computer could generate thousands of possible styles. The challenge may already be not to keep ahead of the computer, but to fight it for the attention of the eyes of humanity.

I maintain that only a conscious, feeling thing that knows it is alive and has a choice whether to even make art or not, and cares about anything at all, can produce truly substantive work. The proof, however, will be in the images.

Some will argue that the computer images are soulless, but the initial images generated were not intended as art or to express feeling. One could create an algorithm for recognizing and then creating Expressionist paintings. With enough work, the results could get scary. Another argument is that the real artists are the programmers, and the algorithm is just a tool. That works a bit for me, because I don’t use fractal programs because I don’t feel I can fully take credit for what they produce, as they do 100% of the rendering (which would be the hardest part if one were to try to make similar images through traditional, physical means). However, we wouldn’t say that the programmers of Deep Blue beat Garry Kasparov at Chess. They couldn’t. It’s the program that beat him. And in the same way, the programmers can’t foresee what the imaging algorithm will produce, nor are they capable of doing it themselves. And the images are produced by artificial intelligence, so it’s tough to not give those neural networks any credit.

[Click on the images below to see them sized for your screen in a new tab].

People may want to dismiss these automatically, rhetorically, as something like the byproducts of a clueless or malfunctioning computer program, but I’m grateful for them, even if they make it even harder in some ways to be a visual artist (especially if you use digital media).

I like the image of the galaxy and the one of the squirrels enough that I’d hang posters of them on my walls. The process can look like a gimmick or technique, but that’s not what’s really going on. What we have here is the beginnings of the ability to peer into the mind of AI, which is an alien intelligence that doesn’t function by our rules or within the parameters of our anatomical orientation to the universe. This voyaging into the mental process of the computer is very evident in video when we zoom in and it keeps manufacturing new imagery on the fly.

Here is a video from which I took the still image above.

I think we can learn from how a computer sees the universe, and even broaden our visual horizons. What’s more, there are definitely passages in the images that are beautiful, in a very psychedelic way. And this is just the beginning.

And if you are STILL not intimidated by the power of these neural networks, you may not know that the details appear to be infinite. You can just keep zooming in, and in, and in! There’s no way a human visual artist can compete with that using analog methods.

You can view these examples:

It can even be used in real time on video. See below for a brief presentation on how it works (the weirdest stuff is at the end).

Lastly, these images cropped up at a time when I’m making my own art about artificial intelligence, robots, and humans. Check out the piece I just finished, in which conscious robots are being destroyed because of the threat they pose to humans. Is it saving our species, or genocide.

Below is a close up of the image above, so you can see the painterly brush work I use. You can see many more details, and learn about my process and the meaning of the piece here.

And in the piece I am currently working on, a robot is shooting a human. It’s more complex than that, but here it is so far.

To see how the rest of my art (which combines digital and traditional approaches) compares to Google Deep Dream, go here.

Also you might be interested in the algorithm that is being used to detect creativity in visual art, which I wrote about here.

37 replies on “Google Deep Dream Getting Too Good”