The fine art crowd had been fooled again. They’ve fallen for forgeries of Abstract Expressionist paintings by a Chinese artist; paid record amounts for one-striped paintings; crowned a businessman who can’t sculpt the greatest living artist when he merely makes reproductions of the most innocuous kitsch; and now they’ve bought a cheesy mall sculpture mistaking it for a work of genius.

Following is the text from the article, which I lovingly copied, as well as a cleaned-up scan of the photo: 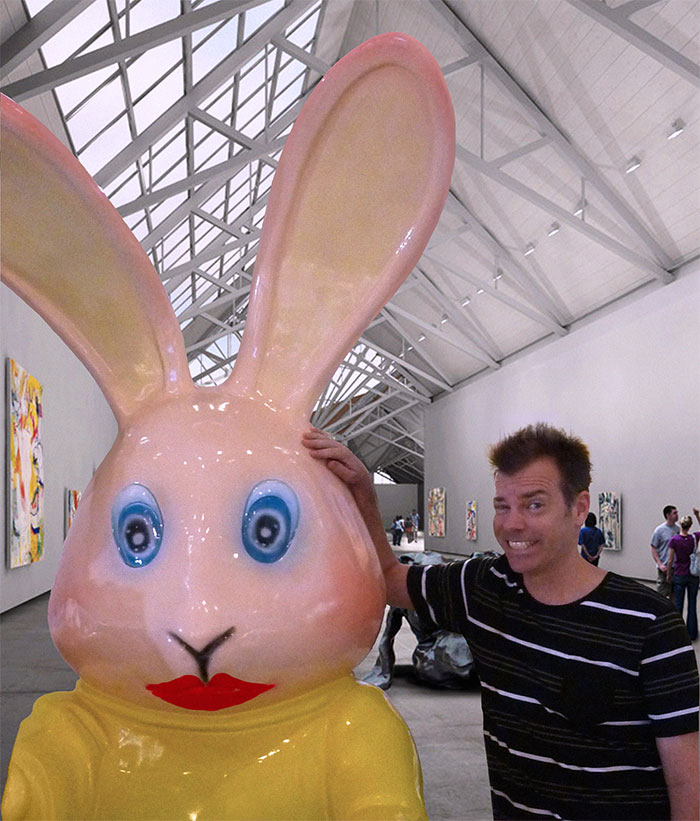 Unknown artist buys used storefront mall figure for $650 and sells it as an original fine art sculpture for $3.2 million.

New York. After visiting an upscale New York gallery, artist Eric Kuns was outraged and insulted. “This crap is of the one percent, and for the one percent”, said Kuns. He was convinced the art world had gone blind, and that the masterpieces of today were indistinguishable from the decorations he’d seen in a mall the weekend before. Out of his despair blossomed an idea, and having lost his job to outsourcing, he gambled on art connoisseurs and buyers being so disconnected from everyday reality that they “couldn’t tell art from arse”. Eric returned to the dilapidating mall in South Jersey he’d gone shopping in the weekend before on a quest to relocate a particularly “cheesy” oversized rabbit figure. Upon finding it he made inquiries, bargained, and by the end of the day had wrapped the rabbit in a blanket, flung it in the back of his rickety Chevy Luv pickup truck, and hauled it back to his apartment. There he made some small repairs, painted a big pair of red lips on the rabbit, and planned how to fool the art world into taking his newly named “Big Lipped Bunny” seriously. He’d spent $650 on it, and he wanted a return.

Disgusted by the art world. I took a day off to go see art. I went to the Gagosian Gallery and thought I’d walked into an upscale mall. Everything was slick, clean, shiny, and superficial. My first reaction was, “What the fuck is this shit?” I soon discovered this was the latest show by the greatest living artist. I thought it took skill, but, what a waste of talent. Then I read that the artist doesn’t even touch his own work. It’s done by hired sculptors. I wondered, why is there such a fine line between the priceless and the worthless? Why does something that’s supposed to be so great suck so bad?

The hardest part for Eric part was “ingesting the tripe of artist statements and theories on which to underpin the rabbit as an important, and thus priceless fine art object” and the easiest part was “regurgitating that threadbare rubbish”. He’d memorized “glib pronouncements” by the likes of Jeff Koons and Paul McCarthy, and learned to “do a sleight of hand so that lack of anything substantive that one can latch onto is confused for the boundless ineffable”.

Kuns did research and elaborated his strategy, opting to advertise the work as “painted red lips on statue” in fine print so he was technically selling the “painting of the lips”, in which case the statue was just the surface the painting was done on. He further plotted to confuse people into believing it was created by art superstar Jeff Koons, whose name shares the same pronunciation as Kuns. Another challenge was to find a gallery owner who would be complicit in such a ruse. Fantastically, the plot worked, and the placard adjacent the sculpture was what sold the buyer:

Big Lipped Bunny is a generous sculpture which does not alienate anyone. It celebrates the joy of childhood play by reconjuring our first sight of a new toy, and in so doing reaffirms the harmony of life in a time of discord. The red lips convey the sensual and the arena of love that a cherished toy is a prelude to. Big Lipped Bunny is an icon of our age, and the epitome of innocence melded with sophistication. Ownership of this masterwork by a world class artist whose name sounds familiar to everyone will instantly position the buyer among the pinnacle of collectors in the world and transform a collection to an unrivaled level of grandeur.