If you don’t know what this is all about – because you’ve been lucky enough to miss the whole spectacle – this time I’ll do some splainin’. I say “this time” because I made a B&W drawing about a week ago, and didn’t say Jack Diddley about what the image was about.

Miley Cyrus is a “teen idol” created by Disney who became an adult and decided to change her image. I don’t know her music or listen to it. I couldn’t care less about it and I’m not part of the target demographic. I’m too old, too male, and overly fond of music. For me listening to her tunes would feel so immature and boring it would be like drinking baby formula. I don’t blame Miley herself for being a product prepackaged for teenage girls, or even for her (probably contrived) attempt to break out of the mold and emerge as an adult “bad girl”. She’s a puppet created by the music industry to generate revenue, and the people running the show are ultimately responsible for the tragedy. “Frankenstein” wasn’t the monster, it was Dr. Frankenstein. And as a friend of mine pointed out, Miley’s performance had to be planned, choreographed, and rehearsed. It wasn’t a surprise.

MTV showcased this year’s Video Music Awards (VMA) on August 25th. Miley did a performance that looked too much like part of a striptease dance, and too little like singing a song. It was trashy and sad. Trashy because of the overtly sexual moves, and sad because they weren’t sexy. I only know about her performance because a couple other bloggers I read posted links to the video of her “twerking” (booty-shaking-dancing). Aside from the inappropriateness of her more lurid gestures (crotch grabbing and wielding a giant hand with an extended finger as it if were a cock), her tongue was out so much that dogs would think she was their mother.

Below is a selection of her more extravagantly trashy gestures and poses. 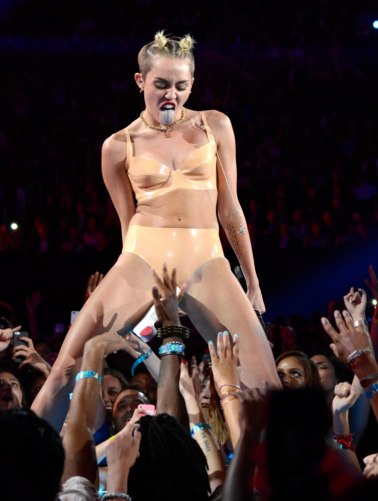 My original inspiration was to make one of my horrendously bad “funny fan art” pieces celebrating the magical twerking highlight of Cyrus’s performance, but it ended up being a caricature, or even a political cartoon. When I made it I’d seen some of the video in question, but I haden’t watched the whole thing OR the VMA awards night performances. Then, several days ago, I watched them. Holy shit they stank. Not one of the featured musicians played an instrument. Music has become all about dancing, and whoever the front person or people are strutting their stuff and stroking their egos and crotches. Music has taken the backseat to acting, and the new superstars are performers rather than musicians. Somehow it doesn’t even matter anymore if they are second or third rate vocalists. They can win the top awards while people still need to reassure one another that they can actually sing at all.

I reflected on the time I first saw MTV, when it came out in the 80’s. I remember Ronnie James Dio singing “Die Young” with Black Sabbath. It was one of the first contemporary music videos I saw. I imagined if back then I’d been offered the opportunity to see what MTV would look like 30 years in the future, I’d have initially been thrilled, and then when I got to see it I’d have been horrifically disappointed. And it’s not that there isn’t good music out there, but rather that the music industry and television have created and showcased the musical equivalent of fast food. You’d probably never hear something like Kimya Dawson‘s “12/26”, about the Tsunami that hit Indonesia, Sri Lanka, India, and Thailand,  (it DOES have some of the most gruesome lyrics and bitingly explicit political lyrics in music history), because, well, Kimya doesn’t really fit the ideal of a corporate-groomed superstar at all.

In the end the worst flop the MTV 2013 VMA awards night may not have been Miley Cyrus’s twerking, but what has become of popular music. Her performance was just the visible symptom of a greater disease – the dumbing down of music to sensationalist videos for corporate-manufactured superstars.

10 replies on “My Miley Cyrus Twerking Drawing, in color”