I am guest poster, J. Sri Bhagovwid. Today I want to address why power is stupid. 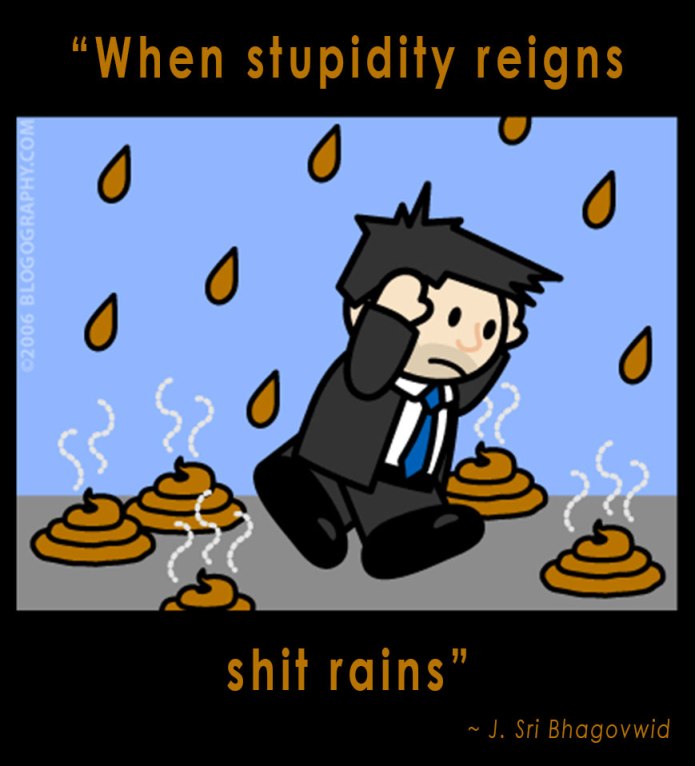 First we have to recognize that the ego naturally has its own self-preservation as its first requisite. Second, we must acknowledge that the ego is a mental construct. It is a series of beliefs and convictions about itself. It is not a real thing like a shit is a real thing. It is more or less afloat during waking hours, but also in dreams. Because it is not real, it is intensely vulnerable. Because it is so vulnerable, it is willing to sacrifice not only the egos of others, but their very lives, in order to do the impossible = to preserve its illusory and imaginary self. It will try to protect itself with endless security, and enshrine itself with infinite riches. The ego wants nothing more than to be immortal.

It is also a matter of course that the ego will seek positions of power, or when it finds itself in them, will ultimately operate out of selfish, self-interest. A very mature and well-trained mind is required to resist the temptation and maintain objectivity. We are counting on the ego keeping itself in check. But this can’t be done without the ego coming to terms with its own phantasmagorical composition, which it will not want to do. We are asking it to decapitate itself. It must be dissolved from the outside. However, the more the ego is ensconced in a position of power, the less likely the consciousness or (seemingly) random events are likely to dethrone it, which is why we end up with megalomaniacs like Kim Jong Il, Hitler, Mao, Pol Pot, or Osho. The more powerful the individual, the more protected his or her ego is from the humbling blows of reality, and thus the less likely he is to look out for the good of others rather than fortify his own illusory security against all others. The end result is that the dim often lead the bright. You can say that the blind are leading the seeing.

The ego is like the chrysalis of the caterpillar. It needs to be hard enough to protect the developing butterfly, but ultimately the emergent being is trapped inside unless it can escape its boundaries.  In the same way, people are busy fortifying their own chrysalises in order to protect the larval stage of their development of consciousness. They become perpetual children, trapped in a selfish, self-serving stage of development.

The goal of an intelligent, sentient being should be to evolve its consciousness, not to thwart its evolution by gilding it in the lower stages of development. Sadly, people aren’t even aware this is a possibility, and whole societies and civilizations are based on the conviction that we must all act out of the need to fortify our egos – accumulation of personal wealth is the presumed aim of every individual – against everything else and everyone else. They say “it is a dog eat dog world”. Dogs don’t eat dogs. I’ts an ego eat ego world, and an ego eat everything world.

It’s time to work on escaping the chrysalis.