Say so long to Solipsism 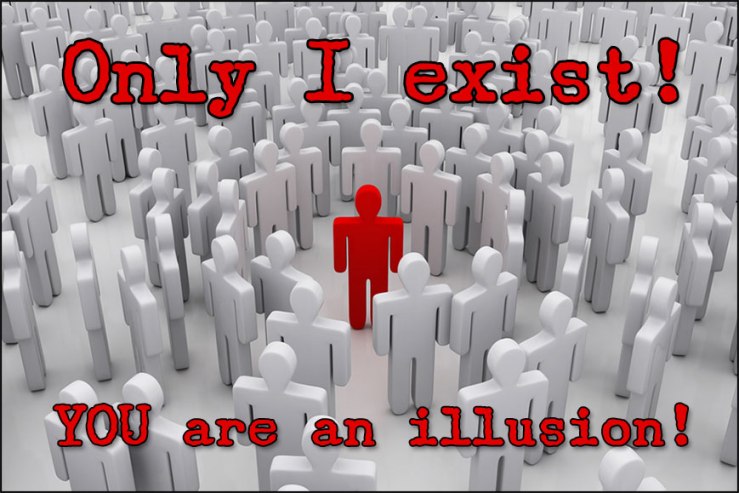 Hard Solipsism is an even easier target than determinism to refute, and I think it’s worthwhile to trim the fat off of relevant philosophical inquiry.

Solipsism is the philosophical argument that you can’t know that you aren’t the only thing in existence, and that you aren’t just imagining everyone and everything else. The strongest argument for Solipsism is that this is precisely what we experience in our dreams. While dreaming we encounter other people, have conversations, and otherwise participate in an all-encompassing tangible reality completely fabricated by our subconscious. Nobody else really exists in our dreams, and yet we are (with rare exceptions of lucid dreaming) completely fooled by them. So, if you stop and think about it, you know absolutely that your subconscious mind is capable while dreaming of completely fooling you into thinking you are not alone, but are interacting with separate entities in a physical environment. How do we then know that what we think of as an awakened state in a real world isn’t just immersion in another, more sophisticated, dream-like state?

The biggest problem with Solipsism is that you can only make this argument with yourself. You could tell yourself that I am a figment of your imagination, but you can’t tell me that, because I know that I exist independently of you. Obviously, nobody can tell you that you don’t exist, because you can’t hear the argument unless you exist.

Being a Solipsist is not going to make you any friends, because you are going to have to insist that they are all just so much ethereal gossamer in your incredibly vivid imagination. When you hang up the phone you tell them that they cease to exist.

I once had an amusing online debate with a Solipsist. My argument was this: “You are right. I don’t exist. There is only you. You are God. I am only letters on a screen you create with your own imagination.” He had no comeback to this argument – because it is in agreement with his stance to begin with – but it still pissed him off because he knew I was a real person being a smart ass, but he couldn’t say so or he’d lose the debate.

Things are a bit lonely for the Solipsist, because there can be no other Solipsists to keep him or her company. Nevertheless, I suppose at some point when one encounters the Solipsistic argument, one may want to grapple with it, and try to establish whether or not other people actually exist.

So, how do I know that I’m not the only thing in the universe and just imagining everything else? We only need compare waking reality to dreams to see a critical difference between a reality composed of non-imaginary people, and a completely imagined reality. In the dream, everything that happens occurs only within our own framework of knowledge. For example, I can’t speak Swahili, and neither can anyone in my dreams. I don’t know how to fly a plane, and neither does anyone in my dreams. I’ve never been to Yugoslavia, it only exists as a name in my dreams, and I can’t visit there while sleeping. Just now I looked up lesser known countries, and I’d never heard of the Nagorno-Karabakh Republic before. Without doing some research, I can’t have anything like an accurate dream of visiting the Nagorno-Karabakh Republic.

There is information that I know exists, such as how to speak Swahili or how to fly an airplane, but which I don’t have and can’t access. I know there can’t be airplanes without the technology to build them or the learned skill to fly them. How can I be creating the planes and flying them without knowing how to do it myself? The Solipsist would have to argue that I actually DO have this knowledge but deceive myself into thinking I don’t, or that airplanes don’t actually fly and nobody knows how to fly them (nobody else exists so how could they?), in which case they only appear to fly.

I can look up how to speak Swahili or how to fly a plane and at once discover that this knowledge surely exists, and yet I don’t have it. If I started to teach myself Swahili the process would be very slow; and if I moved somewhere where people spoke the language, such as Tanzania, I wouldn’t understand 90% of what everyone else was saying, nor could I accurately produce in my dreams language beyond what I’d already mastered.

The Solipsist will have to argue that while attempting to learn Swahili I am actually inventing a new language in my imagination. I’d already invented the name of the language, and now I would just be inventing the words and syntax. If I had a Swahili teacher, she wouldn’t actually be teaching me anything, I’d be inventing the language on the spot and just using her as a puppet.

This becomes still more problematical when one considers that things which exist in our imagination, such as a CD, in every way reflect the knowledge required to make them. Sure, I can imagine what a CD looks like, but I have nothing of the knowledge of how to make one. Nevertheless its resultant form entirely reflects the technology needed to produce it. Why does the form of a CD or airplane reflect the necessary technology to produce it if that technology doesn’t actually exist unless you bother to invent it in your own mind after the fact?

To this the Solipsist would have to argue, again, that you actually possess all this knowledge but choose to fool yourself, probably to make a game of existence to beguile the lazy hours of infinitude. If this were the case you would have to have limitless intelligence and knowledge. You’d be God.

So, again, here are the main problems of Solipsism, according to me.

1. You have all knowledge but only allow yourself to perceive a tiny portion of it. Now we need another explanation for why we do this, and on and on…

3. You’d have to be God. According to you, there is nothing else but you, in which case there couldn’t be a separate god, and therefor you ARE God! Even if you don’t believe in God, if you believe you created all the known universe with your own noodle, you are so unimaginably brilliant you must be God by some other name. It’s probably less embarrassing to go around trumpeting that you are God in a universe where you really ARE God, and all others are just dream creations moving along as you pull the strings. However, in the other reality that you can’t escape, where there appears to be other distinct people who are not all necessarily friendly to you, you should probably be humble and keep it a secret that you are God. People could take offense to that claim, especially when you follow it up by telling them that they don’t exist, and are mere illusions. Chances are it will cross their minds to prove their existence by punching you in the nose. However much someone might convince themselves of Solipsism, if they try to apply it in the illusionary world they think they live in, it’s going to turn out bad for them.

4. And the biggest criticism is just how ridiculous Solipsism is if anyone else argues it. If I tell you there is only me and you are only text on a screen, you can’t possibly take me seriously. If someone else say’s that I don’t exist, it’s just stupid. It’s baby talk. This philosophy by its very nature cannot be corroborated by anyone else without refuting itself by acknowledging others exist. Because it can’t be corroborated it isn’t empirical. That might be OK in a Solipsistic universe where nothing can be corroborated at all, but outside of the Solipsistic argument, most anything else taken seriously is rigorously corroborated. Solipsism is the outstanding exception. It’s more of an “imagine if” after-school fantasy for children than a philosophy to be taken seriously.

There is at least one good thing about Solipsism though, and that’s that it acknowledges the role of our own minds in fashioning our universes in our heads. Everything we experience is witnessed on the inner screen of our own consciousness, and by our choices, experience, and knowledge we do fashion much of what transpires in our personal universes. However, the Solipsists go too far in arguing that there is no external world that all this happens in. It’s far more interesting for us to have our inner worlds AND for them to be forged in and through an actual physical world.

47 replies on “Say so long to Solipsism”