You got it! The title of this article is a double entendre. I’ve committed a cruel abomination on an old master, and I’ve exposed that his own masterpiece was also a cruel abomination. Rest easy, folks. Don’t get excited or angry. I’m not shooting down the greats for my own self-glorification, or at least not consciously doing so. I’m pointing out that while they have been immortalized, they weren’t immortals. Like you and me, they struggled with anatomy, perspective, lighting, and all those elements that it’s impossible to get down perfectly. But like them, with enough persistence, we too might be able to achieve something worthy of hanging on a wall. Further, to err is human, and the great artists become easier to relate to when we realize they had vulnerabilities, and sometimes cruelly botched their subject’s anatomy. My mockery is designed to highlight a few cringe-worthy mistakes the great Goya made in this infamous painting. I’m a huge fan of the old masters, and think it’s a tragedy that they aren’t being taught more [in my grad school we spent precisely zero seconds on art created prior to Duchamp, unless it was to deride it].

Here’s the original for your delectation, and perhaps my version will help you spot a problem or two or three.

The most obvious issue is the real estate between her breasts: one burdened by gravity, and the other floating in weightlessness. You could fit a third breast in there with room to spare, which explains the extra breast in my version. I hope you caught all my changes, so I don’t ruin it for you. Think of it as a challenge.

Here’s some interesting facts about this painting. First off, there was a model, and I gather he paid a lot of attention to her lower half, which is much more persuasive to my eye. There’s speculation about whether it was his mistress, a prominent Duchess, or a composite of different women.

The word “Maja” in the title denotes a female Spaniard issuing from the lower classes. There, you learned something.

The painting belonged to the private cabinet of nudes owned by a Prime Minister, where it remained until the Spanish Inquisition discovered it, along with his other questionable paintings. Goya managed to escape being prosecuted by the Inquisition by stating that his painting was in the tradition of a Velázquez depiction of Venus, and works by Titian. Not particularly visually literate, and their minds encumbered by viciousness, the inquisitors couldn’t see through the ruse.

Now back to the painting. If you didn’t spot all of my changes, and why I made them, here’s the gif animation that makes it much more obvious:

She has no neck! And because of that, her upper torso is oddly extended. You may say, “Well, at that particular angle, you wouldn’t see her neck”. And that’s why you try to find a pose that doesn’t have awkwardness built into it. Her head is just placed there, and I fear her face is also mostly on the left side of her head. He’s also lighting her from the feet, which has the curious effect that the tops of her breasts get shading [I only noticed this when trying to Photoshop in the new addition], and her upper chest is gray with shadows. And then there’s the claw hand. OK, yeah, I took some real liberties in only giving her three fingers, but how inflated is her pinky?! And the whole palm seems long, and the base of the thumb misplaced. Her hair seems to obscure what would be a perfectly sublime shoulder, unless you imagine pushing back the hair, in which case … … … yuck!

Compare it, if you will, to Titian’s Danaë of 250 years prior:

Danaë has a lot of neck. And her breasts belong to the laws of physics with which we are more intimately familiar. Her face even tilts in the same direction as her head. She’s also lit from a low angle, but her chest isn’t gray. Her pinky doesn’t look like it was dug out of the ground.

Goya is a great artist, but just between you and me (and this it top secret stuff), he’s not a virtuoso on par with someone like Velázquez, or Titian. It’s his unflinching depictions of the horror of war, and his facility with etching, that make him an unforgettable and great artist. I’m not even sure we want his work around dismembered bodies to be any more realistic than they already are.

I know, I know, my art criticism can be a little acerbic at times. So much better than just automatically fawning over whatever I’m supposed to, and not even using my own eyes and judgement.

So, if you look carefully at some of my work, and you suddenly notice some grievous error — I’d point some out, but that would rob people of finding them on their own — remember my dear inquisitors, that I am working in the tradition of Goya!

Stay tuned for the next exciting episode, and don’t forget to pulverize that like button.

And if you like my art or criticism, please consider chipping in so I can keep working until I drop. Through Patreon, you can give $1 (or more) per month to help keep me going (y’know, so I don’t have to put art on the back-burner while I slog away at a full-time job). See how it works here. Or go directly to my account. 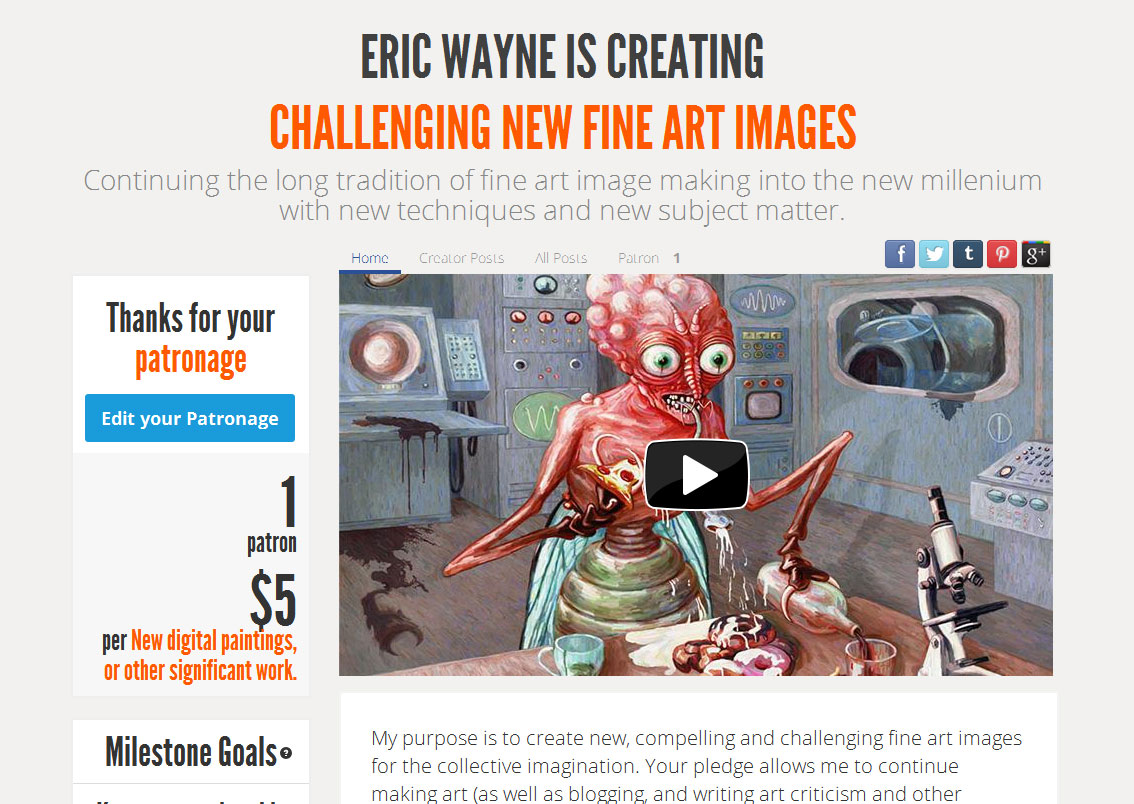 New art: Vehicular Monster Slaughter 01. This one's a collab with AI.
Blue headed tree Agama lizard in the local park. I didn't adjust the color at all or use a filter. That's how nature made him.
It took me far more time, effort, and skill just to make the graphic than it did for me to have AI make the digital painting for me.
New art: Misfits of the Metaverse No. 8.
Misfits ot the Metaverse 7.
Graphic I made for my blog post. Everybody seems to know and admire Pulitzer prize winner for art criticism, Jerry Saltz. But he ain't no Robert Hughes. In my latest article I dissect 6 times he face-planted astronomically. Link to my blog in profile, or copy/paste: https://artofericwayne.com/2022/03/12/better-call-saltz-or-not/