My Sci-Fi Drawings From When I Was a Kid

These are just curiosities for entertainment, folks. You aren’t meant to assess them as serious works. They’re my kid stuff!

When I was growing up my favorite things were sci-fi shows I could see on TV, frogs and lizards, and drawing (not to mention girls). Fortunately, I had the foresight to document most my early work, which I no longer know the whereabouts of, or if it exists at all. Here are some amusing early drawings of robots, space-ships, and monsters from Jr. High to High school. I drew other stuff, but this is the theme of the day. Some of them have dates, so I can try to put them in rough chronological order, in which case you can see some improvement. As usual, you can click on any image to see it in a new tab, sized for your monitor.

I’d say I wasn’t working from a reference, and just trying to reproduce the ships from memory. Any old scrap of paper would do, and I see I tested my markers and drew on the same piece. [Even though Star Wars had come out earlier, and surely would have blown me away, I didn’t see it until years later — because it wasn’t on TV — and then it was already past the magical sweet spot, and I was already too cynically aware.]

This one was my own design. The thing above his head is supposed to be a wall and an explosion demonstrating the awesome power of his weapon, on the upper right. I discovered channel 28, on my black and white TV, and it had not only Speed Racer, but Ultraman! For a while I drew every monster on Ultraman while watching it. This one shows some Ultraman influence. 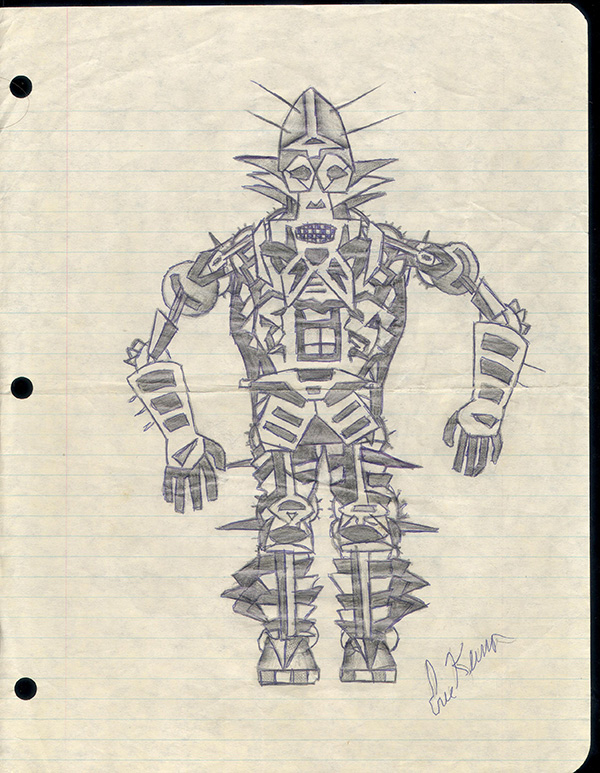 I remember drawing this in my Algebra class, which I was failing. Math bored the living crap out of me, but I wasn’t that bad at it. I just never did my homework, and couldn’t remember how to do the equations at test time. When I realized I was in deep shit I tried harder and got my grade up to a “C”, even though the teacher thought it was impossible for me to do so. You might notice my sigs don’t use my nom de plume, and they evolve as well.

Hey, I did thumbnails. That’s a good habit I lost a looooong time ago. I felt compelled to give them names. My favorite concept was the Gasepian Splitting Ships. I’m sure the name is based on Galaxian, but sounds more Armenian than alien. The ship had two pilots and could splice in two in an emergency. I know I did a more elaborate ink drawing of this, but don’t have that one handy. The Dugong Warrior’s spacecraft (because sea cows are aliens?!) got a remake of sorts. They became the more dignified Ancient Warlords, and gained a logo.

Looks like the front part can disengage from the back rockets, which have weird little handles on them which come directly from the USS Enterprise.

Above, I tried to adopt a Cylon ship into a land vehicle. This drawing seems a bit more sophisticated, so I think it’s newer.

The next one has a date, so I know exactly how old I was when I did it. 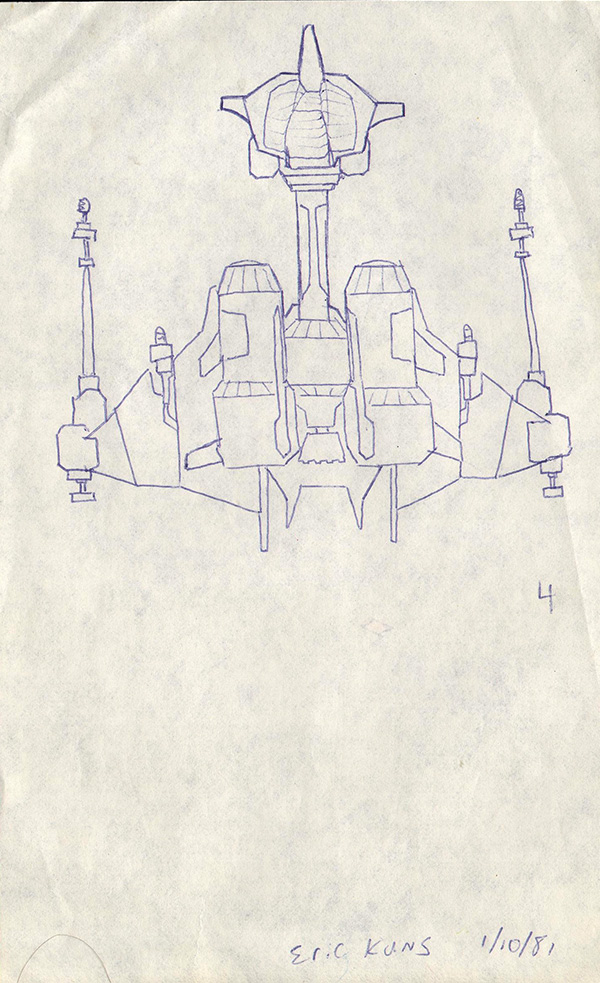 This was my 15 year old brain in action. I did really like the design of the original Klingon ship from Star Trek, and there’s a lot of obvious indebtedness.

Also from ’81, this one shows all the crinkling from having crumpled it up in a ball and thrown it in the trash. Not sure why I did that, or why I rescued it. My concept was completely round wheels. It wasn’t unusual for me to draw directly in ballpoint pen. Some of the perspective isn’t that bad considering (and some is). I still kinda’ like this one, even if I don’t see any practical reason for spherical tires. It might be good for going over all terrain.

And here’s a monster from Christmas of 1981.

OK, it might be obvious I wasn’t really getting formal training. To the degree my drawing teachers even attempted to teach me anything, I wasn’t interested. Art classes in my jr. high and high school were not so much for the artists in the schools, but for the slackers, students and teachers. They were a place to do nothing and put your headphones on. I distinctly remember one high school class where the teacher just set up an elaborate still life — including bicycle wheels with all their crossing spokes, and sheets — and calling it a half-term. Also, why have feet when you could have an extra pair of hands?!

A month later, I tried to put it in color.

I’d discovered YES, and Roger Dean’s album covers. I seem to have a story going on here. I really could have used some help with color theory, or painting, or anatomy.  I just winged it.

Here’s another one that’s signed and dated, which means I thought it was pretty good. I’m 16 years and a couple months old here.  I updated my favorite ship, and even gave it some sort of paint job. 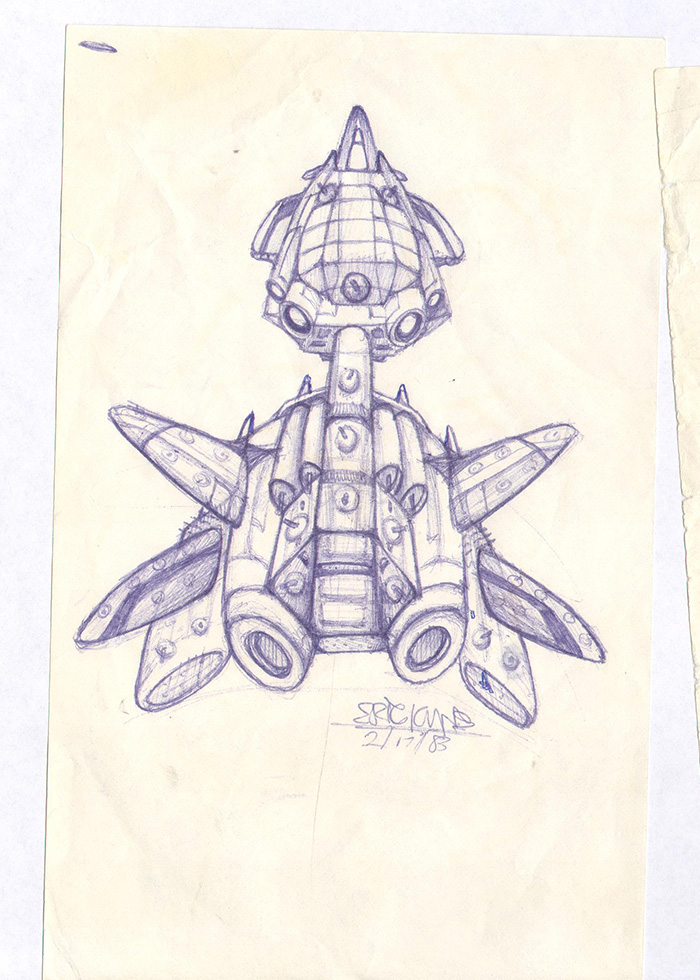 And here it is again, a year later in a ballpoint drawing.

I apparently destroyed this one by using glue stick to affix it to construction paper for a show in the art gallery. Eventually the glue bled through the paper. This one shows the influence of Wayne Barlowe, and his Guide to Extraterrestrials. The egg on the head with the protective antlers, and the giant mouth, were my ideas. I got the trunk from Barlowe, though. The giant tongue probably comes from Rock album covers. I made a full-color, poster-sized version of this with four arms and four legs, but someone stole it from school. I hope they kept it.

Another version of the head.

With this alien I came up with another new signature. Expressive! And it’s funny, because I can remember making that sig.

I’m liking the semi-transparent wings on this one. I switched from a blue to a black ballpoint, because I wanted a darker shade, and kinda’ ruined it. At this stage I pretty much made every beginner mistake, but could pull off oddball things anyways. For example, I almost always started with one eye and just worked from there, and in pen. That’s as opposed to making sketches, or penciling in the rough shape first.

And here’s probably my best surviving piece from high school. 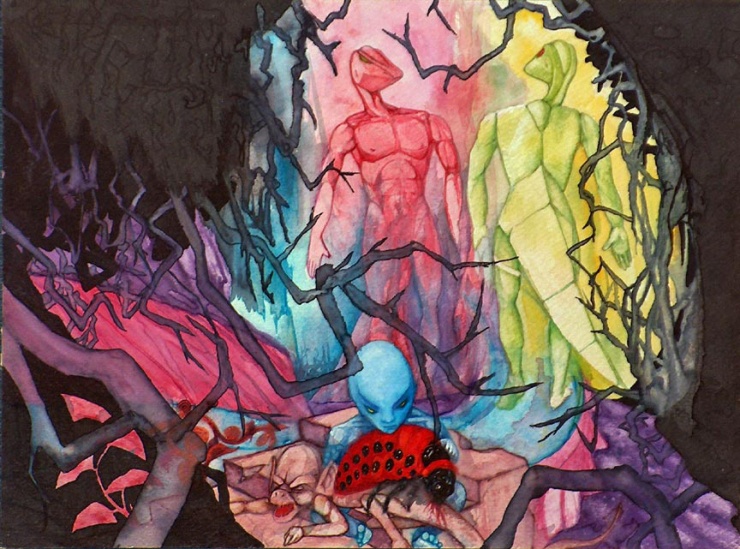 I made up the creatures encountering each other in mirror reflection and in opposing colors. There’s more of a story going on here in the foreground with the alien consoling the grub that’s eating the monkey-creature.

I started school a year early, so was only 17 when I was a senior in high school. I got much, much better the following year when I enrolled in jr. college and got real art classes for the first time. I also matured a lot. It’s safe to say I was quite an innocent (especially compared to kids of today), working-class kid. I worked at Burger King when I did several of these. What I see here, looking back, is a boy who had some skill and imagination, but lacked a real foundation and guided training, which, come to think of it, most nobody else who did art had either.

Here’s one from my first term in community college, which, by the way, was free back then. I was still 18. Going to college was as easy as just continuing high school, because it was across the street. This pic was taken with an early digital camera, and the resolution sucks, by the way.  I hope the original still exists somewhere, because this doesn’t do it justice, even as an early curiosity. 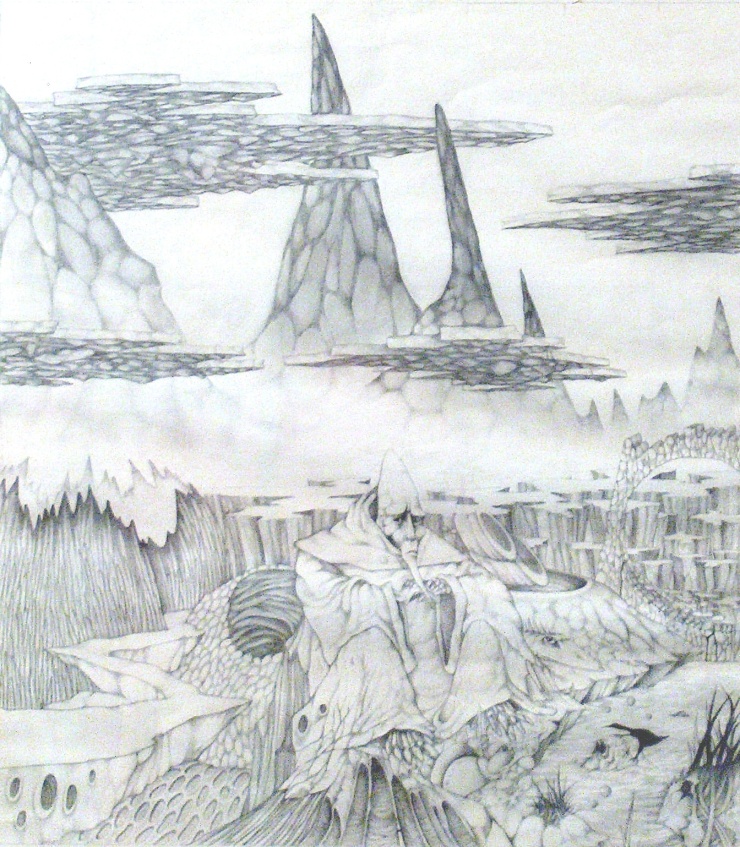 Not long after that I had a major paradigm shift or two or three, started doing abstract art and more modern art, and wouldn’t do sci-fi art much for a very long time. There are a lot of stages of my artistic development, and I’m still growing and changing. It’s a little embarrassing to share such early work, but it might explain a thing or two, such as when I talk about how my early love of art had nothing to do with politics or conceptual art. And you can even see in some of these the genesis of work I do now. I’ve sort of reclaimed the early territory, and tried to incorporate it into the “bigger picture”.  To go with an analogy, it’s like if I were a musician, and when I was a kid I did a lot of fledgling rock songs, and then when I went to college I did experimental contemporary classical, and then decades later started playing rock again, but informed by all my other training and experience.

And there you have my early sci-fi art. Mind you, I did lots more other kinds of art back then, especially cartoons, which I may share at some later date.