More fun things you can do with digital painting that would be quite difficult in traditional mediums. This was just a quickie exercise to see if I could create some sort of fire entity using a couple custom fire brushes I made. I didn’t even bother making it bigger than you see it here. Just a test, folks. I could do better with more effort.

There are two main approaches to using imagery in art. One is to paint your standard, everyday objects, but in a very painterly, stylized way. Think Cezanne’s bowls of fruit, or anything by Van Gogh. Most of modern to contemporary art is of this variety. We can sum it up as realistic imagery in an unrealistic style.

The other way to go is the opposite: unrealistic imagery in a realistic style. That was only the fashion with Surrealism, and then everyone started hating on it, especially in art school. If you said you wanted to paint like Dali in art school, you’d either be the laughing stock or crucified. We do not do surrealism, fantasy, sci-fi, psychedelia, or any of THAT garbage in contemporary art, by Gad! You’d be better off painting with condiments on a table cloth and stapling it to the wall.

I have tended to skate along the top of the fence making unrealistic imagery in an unrealistic style, thus appealing to neither camp.

Now I’m starting to clamor over the fence into the unrealistic imagery in a realistic style terrain, which is ever more popular with the general population of the Earth, while entirely shunned by the art cognoscenti, preferring their urinals, crumpled paper balls, balloon dogs, Brillo boxes, and all manner of things that take it for granted that the utterly banal is where it’s at.

Part of this I’m sure just has to do with the difficulty of rendering unrealistic imagery realistically, and coming up with anything original to paint in the first place. Better to just copy stuff from popular culture, and look at it from a different angle so that the most mundane object is suddenly the most fascinating thing to look at.

Recently I shared a swarm of bees I made in an hour. If you missed it, here it is: 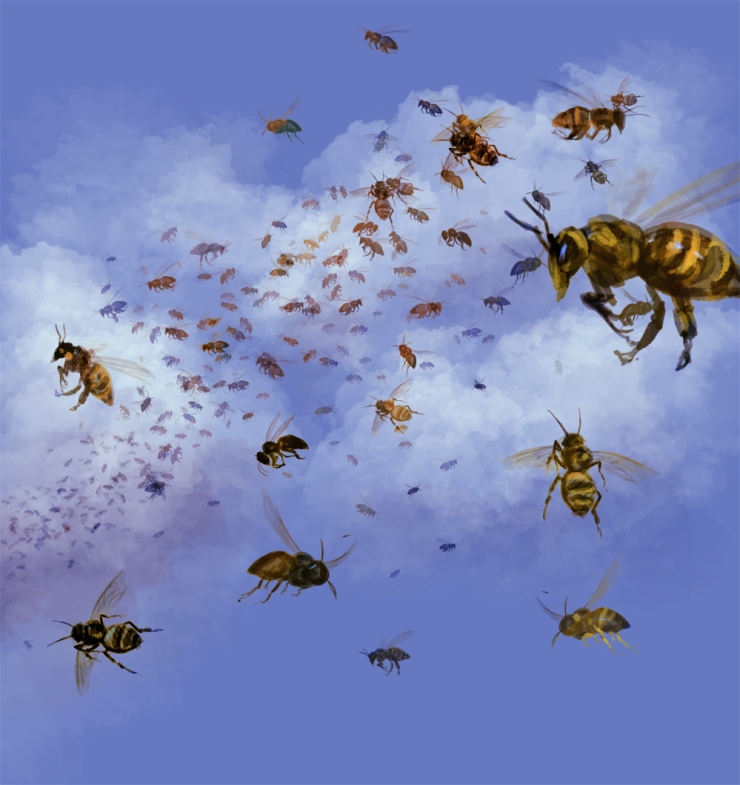 These images are a bit cheesy, I know, thanks for the gentle advice. But they give me ideas for a range of possible things I could do that might be a bit more complex and novel. Not that adding bats to the fire would steer it away from Halloween, but, I just realized that wouldn’t be hard to do.

What I’m getting at is that digital painting makes it reasonably possible to make unrealistic imagery in a realistic style, and explore that highly unfashionable, but ever-so-tantalizing field of the imagination.

I’m meaning to write one of my rants about why art is not a means to an end, but an end in itself. This is what I see missing in the more illustrational quadrant of artistic production. Illustrators tend to imagery in the service of computer games, films, advertisements, etc. Because of this there isn’t a concerted search for novel imagery that has no commercial application or necessary appeal. Why paint something that nobody is going to want to use for anything?

I’m gonna’ end it here, and get back to work, which right now consists of learning a bunch of techniques from illustrators, which I intend to use for my own more fine art purposes down the line.