Abominable Ideas About Art #3: The Public Decides What Art Means

The art world is filled with bad ideas that are repeated like scripture, and accepted as truisms. Most of them presume to make sweeping statements about all art, and establish a hierarchy with their chosen art at the pinnacle. I’ve dismantled a bunch of the worst of these ideas in lengthy articles, but here I’ll nail it down in brief, and create a graphic for each. New additions will be added at the top in new posts. Stay tuned.

#3. The Public Decides What Art Means 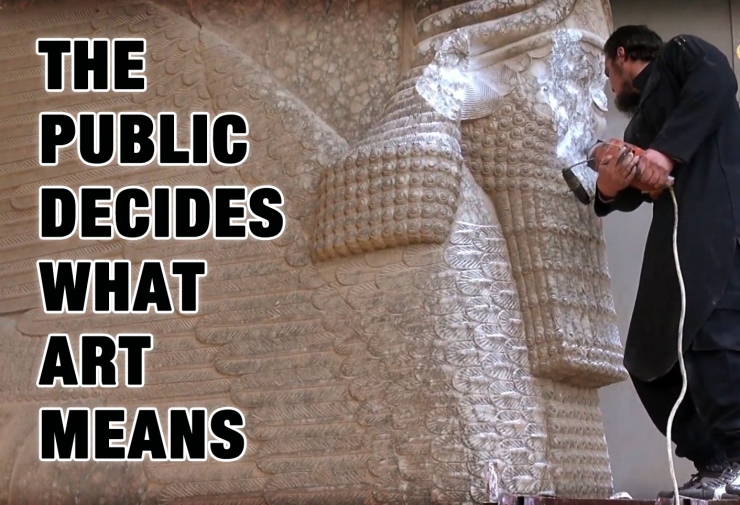 Other closely related versions of this sentiment include that the artist can’t control how his or her art is interpreted, and the artist’s intent is irrelevant.

There’s a lot of truth in the fashionable idea that the audience decides what an artwork means, and it is accepted wisdom in the contemporary art world, but it is a cynical truth that is an affront to justice and the sanctity of the individual. It is similar in its practical wisdom to saying that the judge and jury decide if the accused is innocent or guilty, not the suspect himself. But think how this could go horribly awry:

The Inquisition decides if you are a witch or not.

Imagine being found guilty of witchcraft, sentenced to burning at the stake, and the flames beginning to lick at your ankles. Do you accept that society determines who and what you are, that you are indeed in congress with the devil, and your torture and execution are righteous? Should Frederick Douglass have accepted the conclusion that it was OK for him to be a slave because he was less than human? Perhaps Jesus’ last words should have been:

“Father, reward them, for they know what they are doing.”

There’s something about granting the mob final authority over the individual that pierces right to the core of any sense of justice. Yes, I’ve gone to the extreme of invoking the “mob”, when what we are really talking about here is much more likely art critics, theorists, and critical theorists. It is the art critic, the social critic, and the social justice champion who presently seek to determine the meaning of a work of art. The non-artist theorists have proposed that the meaning and value of art is decided not by the artists themselves, but the theorists themselves. What a surprise!

The idea, along with several other radical-because-ass-backwards concepts, can be traced to Roland Barthes, and his “Death of the Author”:

A text consists of multiple writings, issuing from several cultures and entering into dialogue with each other, into parody, into contestation; but there is one place where this multiplicity is collected, united, and this place is not the author, as we have hitherto said it was, but the reader: the reader is the very space in which are inscribed, without any being lost, all the citations a writing consists of; the unity of a text is not in its origin, it is in its destination…

Sorry about that convoluted bullshit. In short, is says that the author doesn’t create a unique story, but patches together text from various sources, and the meaning never comes together in the author’s mind, but rather in that of the reader.

What elaborate fuckwittery! This is like saying that Einstein didn’t understand the “unity” of his equations or the meaning of his theory of relativity. Rather, only others who examine his math can do that. No, they can only do that IF he did it first, and only if they are up to the task.

I can’t imagine presuming to understand any real artist’s work better than the artist her or himself. It’s like saying I understand their internal struggles and who they really are better than they do. Let me just go lecture them on the meaning of their lives and tell them what they really feel.

True, the artist doesn’t have absolute authority over his or her art, and society is going to have the final say, but this doesn’t mean that the artist’s intent can be disregarded in favor of that of the average critic or audience member armed with an ideology that could fit on an info-poster.

Van Gogh’s mother outlived him by 17 years, in which time he came to be widely appreciated as a great artist. Who knows how she felt about having thrown away crates of his art. In his case, while he was alive, the art world and his own mother, thought he was a joke. He was able to persist anyway because he had confidence in his own vision and judgement. This confidence would be eroded by a belief that others determine what an artist’s work is and means.

We may say that at the end of the day the audience vindicated Van Gogh, and we now appreciate his work. Well, even if that is the case, we are only coming to see his work as he did. But this does not guarantee that we won’t change our mind again (consider the recent revaluation of Gauguin in light of his treatment of women and girls, to put it lightly).

It is a typical practice of radical postmodern theory to find a minor flaw in something, and then because it is not 100% true, insist it is 100% false and the diametric opposite is 100% true. So, if an artist or author does not have absolute authority over his or her art, than the audience has absolute authority. This is super intellectual stupidity, and the tragic result is that the public is prone to denouncing art as degenerate, sexist, patriarchal, sacrilegious, pretentious, garbage, ugly, misguided, morally offensive, and so on. And given that power, the public will censor and destroy art (not entirely unlike the iconoclasts who destroy religious imagery of their own deities, or those of others).

The artist or author surely has at least 51% authority over his or her own creation.

#2. All Art IS Political

All good art is political! There is none that isn’t. And the ones that try hard not to be political are political by saying, ‘We love the status quo. ~ Toni Morrison

[NOTE: I’m a big fan of Morrison’s novels, but not this quote.]

Toni Morrison is just one of armies of people who have made this same claim. It’s everywhere, especially these days. Whenever anyone says “all art” we already know there’s an enormous problem: someone is trying to circumscribe art and lord themselves over art with a single definition. True, Morrison starts off with “all good art”, but then includes the rest when asserting even art that tries hard to not be political says “we love the status quo”. Elsewhere she’s said, “that’s what an artists is — a politician”. Ah, so the child who picks up a brush is instantly a politician. I see. For other quotes one can choose from over 37,000 hits on Google for the exact phrase “all art is political”, that’s how ingrained this idea is.

I remember when people used to say “all art is sexual”, or to quote Picasso, “sex and art are the same thing”. I thought that was bonkers when I heard it, and a bit pervy, but, alas, all has changed, and now all art is political. What we really see here is just that all art (and everything else) can be sexualized, or politicized, or seen through whichever narrow lens serves someone’s personal interests (Freudianism, Marxism, Feminism, religion, pure aesthetics…).

if you really pressed people who say all art is political, they’d probably admit that all fashion, cuisine, sports, horticulture, and everything else is political. They just see everything through political lenses. It’s their problem, not arts. On top of this, it makes art into the rope in a tug-O-war between always opposing forces, and advocating for one side or another.

What does one do in the case of minimalism, where there’s no content at all to politicize (ex, a stack of bricks by Carl Andre)?

You politicize the act of creating minimalist art itself. But then, there’s no difference between your criticism between individual works, because you only have one blanket criticism which you attribute to all minimalism.

The idea that all art is political comes bundled with a virus: all art is judged on its political merit in terms of a particular political agenda. Every artist is a cadre, and all art must serve the cause. The revolutionaries are the new critics, political allegiance their criterion, and the artists that don’t join ranks are the enemy who must be defeated.

The person who only sees politics when looking at art can’t see the art for what it actually offers, and places art in a subordinate role to politics as merely a vehicle or prop for whatever (always “progressive”) political cause. Art which promotes the proper agenda is exalted, but any art, no matter how good, which takes a different political position, including none at all, is reviled. Here, art has no intrinsic quality of its own.

Sorry, fanatics, but you don’t get to enlist all of art into your political revolution. A lot of art is AWOL, a conscientious objector, a celebration of pure beauty, about nature, or even dreaming in an opium trance… “All art is political” is such a grotesque exaggeration, that it might be more accurate to argue the opposite extreme, such as that all the best art succeeds irrespective of whatever political content. And if I had to choose one overstatement, it would definitely be the latter. The artist is an artist, and not a politician.

#1. Making money is the highest form of art

We have Andy Warhol to thank for this nasty little gem.

“Business art is the step that comes after art. I started as a commercial artist, and I want to finish as a business artist. Being good in business is the most fascinating kind of art. During the hippie era people put down the idea of business. They’d say “money is bad” and “working is bad”. But making money is art, and working is art – and good business is the best art.” ~ Andy Warhol

To accept this you need to buy into two things. One is that making money is a form of art-making, and two is that it’s the most advanced level of art. Both are stinkers.

Even if we are going to try to say that anything and everything is art, than why would business make better art than science, or saving lives, or landing on the moon? If making money is a form of art in the broadest sense of the word, it’s closer to the worst art.

Saying business is the best form of art is a bit it like saying greed is the most noble self-sacrifice. It’s shocking us with stupidity and hoping we mistake the shock for novelty and don’t question the stupidity.

[Extras. A meme, and a digital collage on the topic by yours truly.]

And if you like my art and art criticism, and would like to see me keep working, please consider making a very small donation. Through Patreon, you can give $1 (or more) per month. See how it works here.