This kind of piece stands on its own, needs no placard, no description, no interpretation, no translation, no perusing a CV, no background or context, and no assaying the significance of the biology of the artist. The only reason to read any further is if you are curious to know more.

Sometimes it seems like everything I’m told as an artist is bullshit, and misses the obvious point. One such primary notion, is that it is hopeless for an artist to ever think he or she can “make it” by simply making a compelling image. No, one needs to know how to network. Indeed, that is more important, and the singular work of art loses much relevance when one considers that ultimately what a work means, and what it is, and even how it is seen, is determined, we are told, by the audience, not the artist. Nah. Highfalutin bullshit. The only thing that matters is the art itself, in my opinion, which, if you know my blog, I can back up with reams of argument. I’m not saying this image is worthy of significant attention, but merely that I think it’s possible to make one that is [I’m hoping color versions down the line might possibly turn a few heads at best]. That’s the carrot, and the goal.

Some works that I do will require some extra knowledge, such as my Selfies from Alternate Universes series, which, unless you know that the portraits are all based on me, it’s easy to dismiss them individually as just another portrait of an old man, or a young girl, or a movie still… With other works the technique can be a bit mysterious, such as when I combine digital painting with digital sculpting… Some people will automatically reject such works because, since they can’t tell how they were done, and they involve a computer, they (erroneously in the extreme) insist that “the machine did it”.

Here, the technique, while done digitally, is rather obvious: it’s a drawing. It looks a lot like traditional drawings, such as charcoal drawings I used to make. I used just one brush in Photoshop, which I created, that is somewhere between charcoal and an airbrush. It’s very versatile. And though I’m working in a technically rather straightforward manner, using the computer allows me to take this sort of image further than I could with physical mediums, because, well, I would have erased through the paper in a lot of places by the time I was half way through. The computer allows for infinite edits, and mostly I switch back and forth between drawing/painting in white, or black, while changing the opacity with the number pad, and having the brush set to pressure sensitivity. [Note: my tablet is kind of a POS, and I draw on it in my lap while looking at my monitor. I can only dream, for now, of those fancy new tablets where you draw directly on the image.]

The main point is that people can see what it is (an image), and roughly how it was done, and because it fully uses the language of visual communication, there’s no need for the crutch, or the replacement, of linguistic language to access it. It’s also obvious, I’d think, that it’s done from the imagination.

On that point, for this kind of work, I don’t like to use any references, but just start drawing and see what happens. I think that’s also something you are probably not supposed to do. A quarter century ago when I made acrylic paintings in this style, one of my painting teachers, at UCLA, said, “What will happen when you run out of ideas?” That doesn’t seem to be a problem.

Here is a very early version of the image:

Most the elements are already there, and by this point I thought I had enough to work with. I particularly liked the head with the broken-open skull, enveloped in some sort of membrane (or two), splatted on a surface. I hadn’t seen anything quite like that, so, thought it might be worth developing.

Here it is a little later: 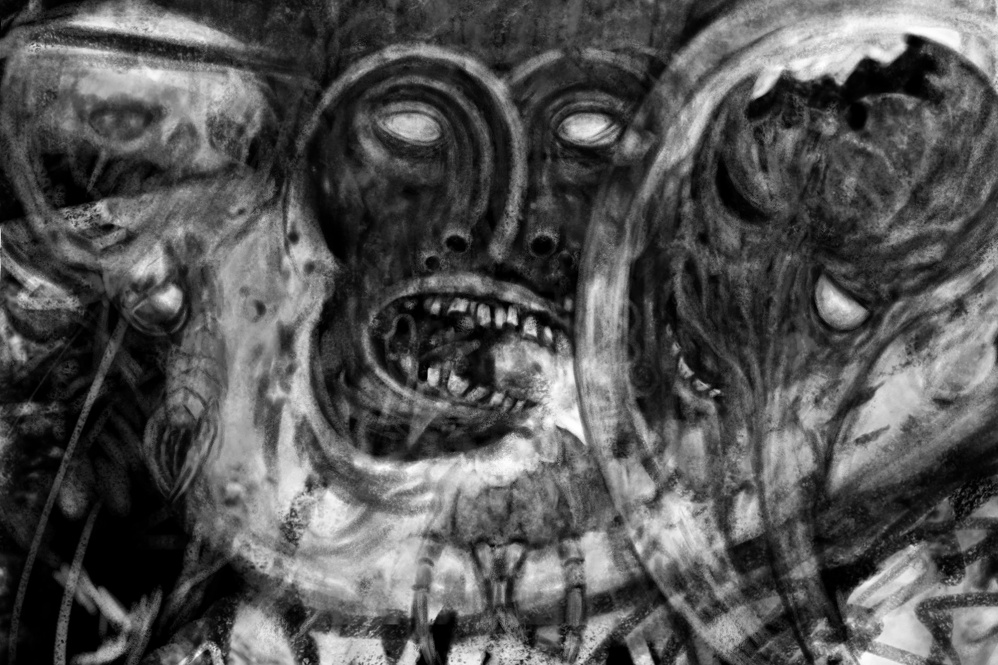 So, the technique is to just look at it, try out some things (like multiple nostrils), tweak out others, fix the worst parts, and so on. It’s like editing a really rough story written on the fly.

To get to the final image can tax my technical abilities in places, and I feel I’m finished when I just reach a place where it’s not only difficult to add anything new, but additions start to make it worse. Here’s the final product, again:

And, there’s also something about how much you can evoke, or depict, with just B&W and drawing. There’s some weird stuff in there like how it gets all psychedelic to the left of the center figure’s head. I feel a bit like I’m hallucinating when I see that. And that skull thing in the back has two faces. A strange drawer with a paper in it appeared in the background. There’s a wing in the lower left. And while the drawing is representational, it shares with abstraction a sort of musical quality in the composition. It has a sort of rhythm to it…

Sure, sure, anyone can snag the image I shared, print it out, or even sell it online themselves (yup, discovered yesterday someone selling my artwork). However, it’s a tiny copy, and won’t make a really good print. The Jpeg you see is 999 pixels wide, whereas the full image is 9,000 pixels wide. Blowing it up will not reproduce the larger image, it will just magnify the smaller one. Thus, I don’t worry about people stealing my art. I rather like that there are tens of thousands of images by me shared all over the internet, few of which are actually attributed to me (true, most are my fakes, and my infamous KFC mutant chicken). I fear more that I could lose the originals, and all that would exist are the crappy, mini-versions I’ve uploaded to the internet. Here’s a screen-shot at “actual pixels”.

And for the anti-digital-art hard-asses (and competitive bores), of whom several have made me well-acquainted with them through their condemning presence in their nasty comments on this blog, there’s really a lot of the traditional sort of pleasure of making one associates with drawing/painting/air-brushing involved in this process. It’s the same feel for me as working with traditional mediums, anyway. If that’s not obvious in the detail, well, you’re a liar, have a worse cataract than I do, not an artist yourself, or just full of shit. OK, OK, maybe that would be more evident in a process video. You can continue to firmly denounce anything done with the computer as soulless, without incurring my wrath, until I’ve put together a little process video of, say, 30 seconds or a minute, that should make holding such a belief so obviously ridiculous, that to articulate it is to brand oneself an anti-tech, vengeful, ideologue (or imbecile if you prefer).

Oh, sorry, was that a little harsh? I may have gotten a bit off topic. OK, I won’t mention it again (for a while).

And here’s the first image in the series.

Let’s see if I can prove my old painting teacher wrong and develop new imagery from my imagination (a quarter century later) using this approximate technique. It’s kind of opening a portal in the visual imagination that is a kind of forbidden fruit — because considered backwards and irrelevant from the get go — in the contemporary art world. It would be considered much more relevant to screw a portal into a gallery wall, in order to emphasize that art isn’t a window into anything (like the artist’s imagination or unique vision) except a flat nothing. THAT would make a profound point about the infertility of the artistic imagination, and why appropriation is so important, and fashionable. Eh, one of the upsides of being unknown and nobody giving a shit what you do is that you can do whatever you want and nobody gives a shit.  There’s precious little to lose.

If I want to make dead-on-arrival art, it’s my pleasure to do so. And just look at it. It even looks like death served up on a platter. How appropriate.

Stay tuned to see what surfaces next.

And if you like my art and art criticism, and would like to see me keep working, please consider making a very small donation. Through Patreon, you can give $1 (or more) per month, and I really appreciate my $1 patrons. Ah, if only I could amass a few hundred dollars per month this way, I could focus entirely on my art. See how it works here.