Just going to share this without comment, which doesn’t mean I’m endorsing it or taking any side for or against. I think I’m afraid to formulate an opinion. Sometimes I wonder if I’ve slipped into some parallel dimensions where, well, everything seems backwards or like a parody. I am perhaps softening up to the idea that I live in a simulated universe. It would explain a lot.

What else is new?… white people are clamoring up their lily white horses and crusading against anyone and anything new or different again. Apparently, the latest attempt at relevance is to overflow paint buckets with tears because easel painting is no longer the center of the art discourse. If that weren’t pathetic enough, this latest pox, probably incubated in 4chan nether chambers, borrows its esthetic and mentality from the “it’s OK to be white” meme. I could understand if one individual lost (most likely) his grip on reality, but this sad testimonial to obsolescence has simultaneously cropped up in and around art schools and art departments all around the country, from CalArts, to UC Ivrine, to RISD, to CUNY… .

As a painter myself I don’t share this sentiment, nor do I appreciate at all being implicated as mystically in-tandem with the resurgence of white supremacy.  As a painter I have never had to explain to friends and relatives why what I do is art at all, or why their two year old couldn’t do the same thing with the content of his diapers.

And then there’s this.

The reactionary rejection of new media is simultaneously a rejection of the cultural contributions of women and people of color. It’s a longing for an earlier time when the white-male-genius reigned over the art world with his virtuoso canvases. Think Picasso!

Hannah E. Simone put it succinctly in her tweet.

Exactly, whoever put up these fliers wants to make painting great again! What next, MAPA hats? I have no sympathy whatsoever for white painters trying to reframe the contemporary art dialogue to be about the marginalization of painters. And even if it were true that to some extent painting wasn’t taken as seriously in some contemporary art venues, maybe that’s just fine, and it’s painters turn to take a back seat and shut up for a decade or two so other kinds of art and artists have a chance to flourish.

As Lizzy Boredome pointed out in her tweet, this is the last gasp of a dying breed. 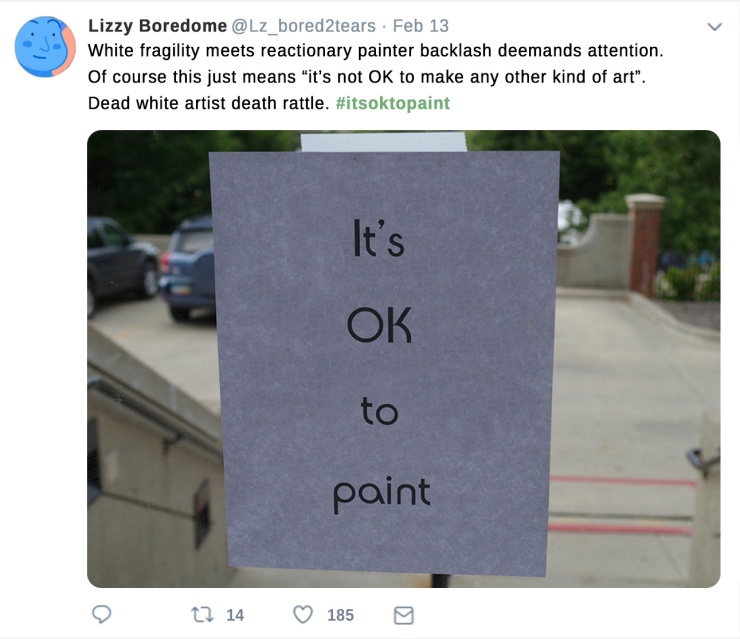 All art is political, and advocacy for any style, or against any styles is also highly political. Art that purports to be apolitical happily upholds the status quo. These meme-tapers go further by trying to roll back decades of artistic evolution by non-white and non-male artists, and in so doing tacitly support state sponsored terror, police brutality against unarmed black men, and the ongoing genocide of indigenous peoples.

One of my heroes, Hannah Gadsby, has dissected the misogyny in painting up to and including modern art. As she said in her brilliant stand-up, Nanette:

“The history of western art is just the history of men painting women like they’re flesh vases for their dick flowers. Having… said that, I think I’ve ruined any chance of getting a job in a gallery now. I mean, I could pay to be a volunteer guide. ‘Cause it doesn’t get any better with modern art, I tell you. I trip on the first hurdle. Pablo Picasso. I hate him, but you’re not allowed to.”

The system is rigged in favor of the white male painter. Women outnumber men in art schools, but when it comes to who is in the permanent collections of prominent art museums in the U.S., it’s  87% male, and 85% white. All I see is people in the spotlight complaining that other people are allowed to clamor up on the stage at all. Nobody is preventing anyone else from painting, and this movement only serves to make it harder for other people to pursue other avenues of expression. In a word, it’s hate, and the fliers are hate speech.