Runaway Rant: Can you Separate the Art from the Artist?

The question has come up a lot recently about whether or not we can separate the artist from the art, and it’s usually in the bad sense. The conclusion comes first, and it’s that a bad person can’t be a good artist. We then work on our arguments, which have to be correct, because we’ve already determined the correct conclusion. But I’m going to have to disagree. A bad person CAN be a good artist, and a good person can be a shitty artist. I have a very easy argument for this.

Art is like pizza. This is the most democratic, true, fair, and practical way of looking at art. When you get your pizza delivered to your plate, the question of whether or not it is a good pizza has nothing to do with who the chef is. If the chef is black or white, straight or gay, a serial killer, enlightened, a civil rights icon, or has children locked up in his basement, that doesn’t factor into whether or not the pizza is good. We can only hope that a good person leading a good life is the one who makes the better pizza, but we fool ourselves in telling ourselves that the bad people must be inferior at whatever their calling is, and that’s weak-minded.

We judge the chef by the pizza, and not the other way around. Simple, clear, and lets us focus on what really counts, which is the flavor of the pie on the table.

I don’t like that conclusion much myself, because I’m rooting for the good guy, but one has to be tough. I like to quote this idea a lot, but I forget where I learned it. It goes a little something like this, “Truth is indifferent to the seeker of truth”. If you want to know the truth, don’t expect that the truth is what you want to know.

I consider myself the good guy, but if I can’t compete with the bad boy, then I need to “up my game” somehow. History tells us Caravaggio was a murderer, and he’s a hell of a lot of competition. There’s no way I’m going to dismiss or discredit his art because he did a terrible thing, though I don’t remember what the context was of the murder. If this were one of my more lengthy articles, I’d look it up. Perhaps it was in self-defense, though I think that would have been at the forefront of the discussion if it were true. For now let’s just go with the hypothetical that an artist like Caravaggio committed a brutal murder. Then, there is the question of whether or not we should admire his art, or if he’s a living artist, buy it. This can get quite sticky, and is a separate but related issue. I’m just going to stick with whether or not the art can be judged by the actions of the artist according to our morality.

The bright side to this is there’s another side to the coin, and it’s that the unfairly persecuted, disenfranchised, underprivileged, unaccepted, wrongly accused, stigmatized, or discriminated against artist’s work also can’t be judged by who the artist is. At the same time we may want to say that bad men shouldn’t be admired as great artists, we lament that so many women were never accepted because of their gender. Here, we want the privilege of judging the art of one group of people by the artist, while freeing the other from such judgment, or worse, we want to give preference to a certain group because of their biology.

When symphonies audition musicians, it’s now common practice to put a black curtain between the performers and those judging. This is called a “blind audition”. Apparently, this may have helped increase female membership in orchestras from roughly 10% in the 70’s to about 30% now. I don’t know how accurate that is, as there may be many other factors, but it sounds like a good idea.

Those who we might want to disqualify or kick down the line because of our perceptions of their worth as a person are alleviated of the prejudice. Sometimes our beliefs about who is moral, or who belongs, or who is a pariah, are our own limitations, not theirs. Sometimes, as the judges, we are the bad person.

And no, if society deems that a person is a great artist, that does not excuse their wrongdoings, provided they really are wrongdoings. I probably don’t need to give salient examples of things people are whipped in public for in some countries. It’s a bit difficult to judge others, or rather it should be, with too much certainty. But there are some things we can all agree are really bad, such as cannibalism (even then we have to consider tribes in which this is customary, or the plane crash survivors in the book and movie “Alive”). Again, that is another separate but related issue.

I maintain that whether the pizza is any good or not depends on the quality of the pie, not what we know about the chef. So, in that sense, yes, you can separate the artist from the art.

There’s another sense in which, depending on the artist, you can’t, and that’s in terms of the artist manifesting his or her personal vision, in which case the art couldn’t exist without that particular artist (think Bosch or Van Gogh). But even in this case, where art and artist are intimately intertwined, it’s only through the art that we perceive the artist’s unique vision, and so, again, we judge the artist by the art, and not the other way around. 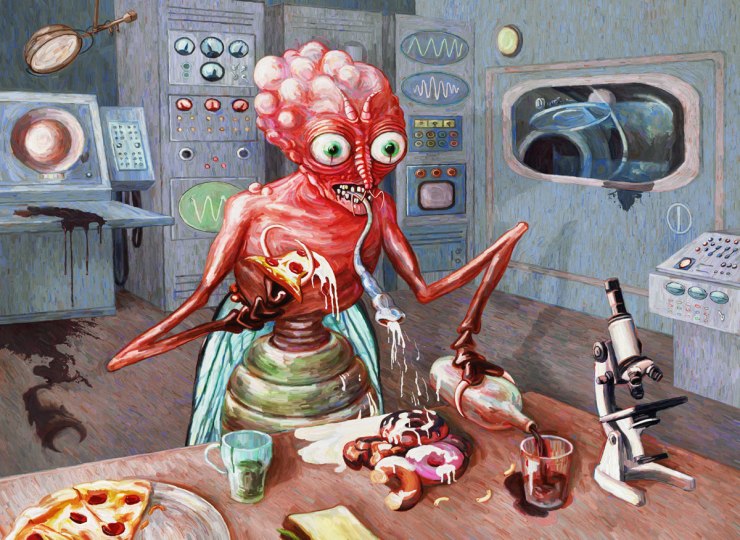