Don’t worry folks, I haven’t thrown in the towel and become a still-life artist. This work, and I intend to do more, are “practice” pieces intended to develop my skills are rendering things like lighting, shading, volumes, shapes, modeling, perspective, textures, and other realistic details.

I often try to create such realistic elements in works completely from my imagination, just by winging it:

I do alright that way, but it’s a bit of trial and error, so I sometimes do the equivalent of exercise, call it training my eye. A while ago I shared a skull I did as practice:

And I’ve done some copies of other people’s still lifes:

It’s a good way to learn because you have to really look, and measure, and study what’s going on. Copying other people’s photos and paintings is all good, but the end result isn’t something I can share as my own. So, if I use my own photos, it instantly becomes my own thing. I own it, so to speak.

Below is the original snap I took of the bag, and then on the left (as usual), is my version drawn with one brush in Photoshop.

If my objective were strict accuracy, or the most photo-realistic result, I could have cheated and traced the original image or drawn over it, or some variation. But that defeats the learning purpose, and I also want the distortions caused by interpretation, which in some ways are improvements, such as that actual perspective is not as pleasant as an amalgam of perspective and aesthetics. Below you can see how far I am off from a direct tracing.

I didn’t deliberately move everything, that’s just the way I saw it. I did make some conscious aesthetic decisions, such as to remove the green bottle cap (which made the whole think look like a squid with a green eye), and change some angled of the bag in the upper right.

I used a standard procedure that works well for me, which is to work from the general to the particular. An in progress pic illustrates this well:

True, my analogue critics, this would be harder to do in oils. Agreed. I’d have had to mix all the colors, whereas in Photoshop I could just use the eye-dropper, and then adjust colors to my satisfaction on the fly. It would also have taken me about 5 times as long, in which case I couldn’t do as many, in which case I would bring less knowledge to my other art. The goal is to make compelling images, not overcome physical obstacles. And when I work from the imagination, I have to come up with all my own color options anyway.

This particular technique of applying color is an excellent mix of traditional and digital. I draw the same way I would with pastel, but it’s much more flexible, and pastel is really fragile. Have a look at a detail.

At first, my focus was on the lighting on the straps, NOT on the texture, but eventually I really got into that. It’s almost Impressionistic. And here you can see what I mean about the traditional element. I’m using just one brush in Photoshop, just like if I used pastels, in which case I’d have one shape, but in an array of colors. I had to experiment to figure out how to capture the texture of the straps, especially in relation to changing light.

Right now this pastel technique is my favorite. I’ve used it before in a lot of pieces, such as a couple of my recent portraits.

But I’ve also used it in a bunch of works from the imagination: 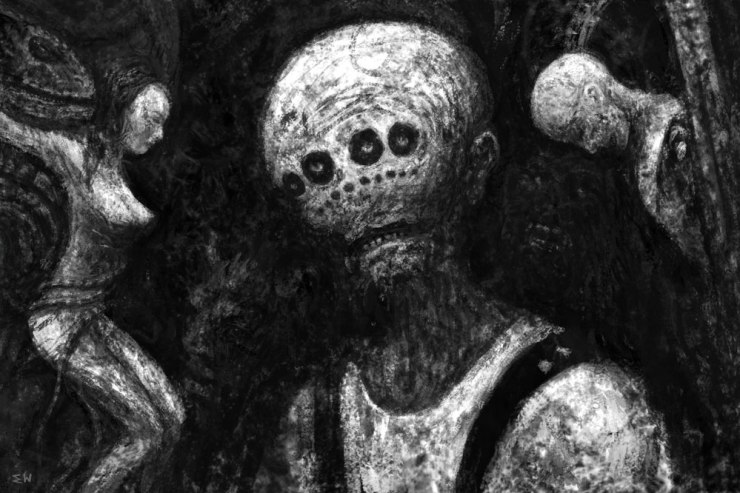 I’m using it one new portrait I’m working on, and one new alien.

I experiment with a lot of techniques, and this one seems like the most versatile, direct, traditional, and practical. So, I’m not just working on the skills I mentioned above (lighting, etc.), but also on how to adapt the pastel technique to achieving different effects and expressive potential.

If I can use the same technique for sketches, realism, expressive strokes, and everything in-between, it creates more possibilities for more sophisticated imagery.

Also, in the department of digital versus analogue mediums, digital really has the advantage here as compared to pastel. Pastel is flat, and probably best protected behind glass (you might be able to blow away color if you try). Well, the digital version doesn’t suffer in comparison by also being flat, but it will also look gorgeous printed out.  Put both behind glass, and if I really wanted to approximate traditional pastel, chances are nobody could tell the difference. But, again, the goal is not an alternative to traditional mediums, or to make an one-of-a-kind object to sell, but to use a more versatile medium to achieve more possibilities and better images. Each medium presents different areas of exploration, and some people are doing amazing things with thick oils that you can’t do digitally, but there are other things where using the computer is heavily advantageous. Depends a lot on disposition and circumstances. But I love both electric and acoustic guitar, synthesizer and piano. Nuff said.

A couple more quick thoughts on this new series. Doing this kind of realistic work is very satisfying in some ways. I find myself LOOKING more at my surroundings, indoors and outside. The canvas bag is one I carry water around in pretty much everywhere I go, and I happened to glance at it on a table top in a restaurant, and then wanted a picture. Notice in the painting you get the sense of being able to grab the straps. And this is where using my own photos of my own environment has a special element using other sources does not. I have a relation with the objects before and after. It influences how I see my daily environment.

The title of the series, “Everyday Observations” addresses that. It’s about looking closely at the visual structure of things I see in my immediate surroundings. Not that I won’t use an action shot, or something, to practice anatomy, and what have you. I wouldn’t do a steady diet of this kind of work (wait, I would, but have other things to offer), rather, I intend it to complement my other work.