One of the good things left about the Internet and social media is that we can still discover artists we appreciate on our own, before they become popular. Amy Regutti (a.k.a. “spacethrob” on Instagram), with her deceptively simple, brightly-colored, and peculiar paintings of mannequin-like, animated figures is one of the more unique artistic voices I’ve encountered.

The purely formal qualities of Regutti’s paintings are a treat for the eye. In Hansen’s Folly, above, the color combination of the blue-green of the, uh, octopus-helmet, against the purple, the brilliant fuchsia and the deep browns and reds is electric. There are a lot of apparent, careful compositional decisions. Notice the dragonfly is a diagonal shot of purple in the dark of the lower right, capped by the cherry-like red eyes. The sign for female on the woman’s shoulder needs to be tilted at just that angle. The angular streaks of lightning cross behind the curvilinear tendrils of the octopus-hat, but can’t compete with it too much.

Incidentally, because of the color combinations, lightning, and the orb, the painting reminds me a little of the cover of Van der Graaf Generator‘s album, “The Least We Can Do Is Wave to Each Other” (1970):

Amy shares a lot of in-progress pics on Facebook and Instagram, and from these it’s apparent that she first makes a careful pencil drawing, then transfers it to canvas, then applies the color. The composition is thus worked out very linearly, as a line drawing, providing a solid foundation. 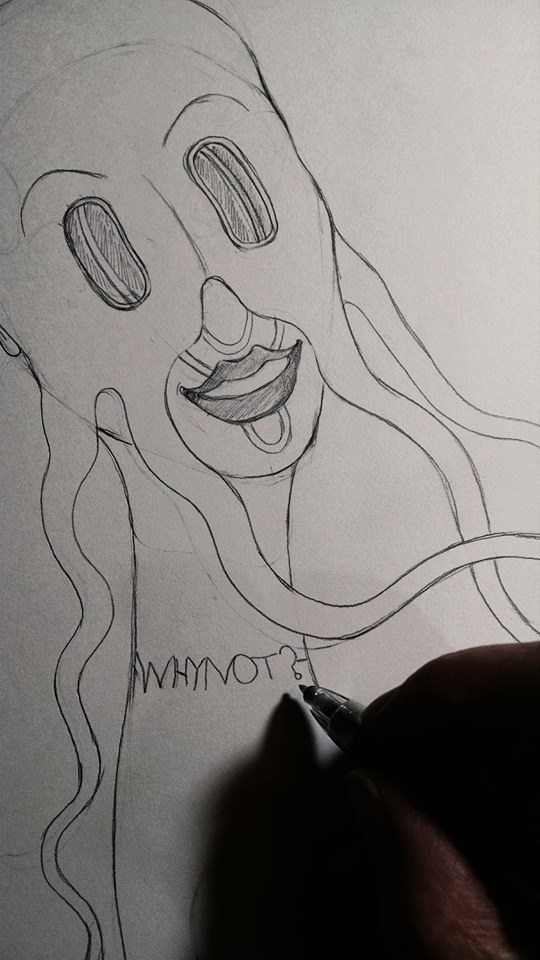 And here we can see a before-and-after drawing and painting-in-progress:

The resulting emphasis on line and shape — not entirely unlike a coloring book, or Henri Rousseau — helps create a dynamic play of line, form, shape, and the positioning and interrelation of parts.

While the formal aesthetics are quite good, it’s the weirdness of Regutti’s vision that captures my interest. The purple lady, out in a lightning storm, topless, with encephalapod headgear, in a mini-skirt, holding a crystal ball, is SMILING. If I could crack what that smile is about I’d be better able to unlock the back-story of the art, but it’s not really necessary.

We can see several of the repeating motifs in Regutti’s paintings in Hansen’s Folly: the subject has the body of a doll; mystical, pupil-less eyes; she’s kinda sexy (if plastic); she has a female symbol and/or heart tattoos; and an insect or other much smaller entity (a frog, moth, snake, or even a mini-astronaut) is included.

Two major things that appeal to me about the paintings are 1) It wouldn’t occur to me to make them, and 2) I don’t really know how to interpret them (and don’t need to), which means they remain tantalizingly mysterious.

This latter point needs more elucidation. I feel that I understand the work visually, and the way it is intended, but can’t begin to fix a verbal interpretation on it with any confidence. It’s a bit like watching the first episode of a sci-fi series, say, Westworld, knowing something is awry, and there are deeper meanings that are going to surface, but for now we can enjoy the unfolding promise.

The double portrait, above, is reminiscent of a couple famous paintings: Frida Kahlo’s “Two Fridas”, of 1939, and an anonymous 16th century painting of the mistress of Henry IV (which has achieved mass recognition for some obscure reason).

What is the meaning of the blue woman’s reflective doll body? I don’t know, but it works. How about the concentric circles emanating from the center of being’s heads? I can’t say. There could be very specific meanings and interpretations, or else the artist might just have happened upon effects she likes. For example, I imagine she might have used a Barbie-type doll as a model, then discovered it worked well in an odd sort of way. On the other hand, the presence of the more distinctly human figure — a rarity in the artist’s work — suggests the doll-like bodies may have been completely premeditated (as in she thought to paint doll bodies, and then went about doing it).

The landscape in the background by itself works beautifully with the vibrant greens against the  and blues and pinks. [And here we might pause and lament that if she just stuck to doing the background landscapes she might be more popular on Instagram. Another aside, but Instagram’s succession of new algorithms seems geared to intentionally maximize profits — by promoting “sponsored adds”, etc. — and unintentionally to critically undermine the venue as a place for unknown artists to gain exposure.] I’m mostly drawn to the pointy-headed, pointy-eared, alien lady.

What will transpire when the alien’s hand touches the shoulder of the human woman? Knowledge, feeling, insight, realization? Or, has the connection already happened, which would explain the strange outcropping of blue frills on the human. Either way, there’s some sort of alien/human (or at least self/other) spiritual communion going on.

Above is a classic Amy Regutti. And if you look again at the first three of her paintings I’ve shared, you should register a range of dynamic color palettes. One can like her art for the bold color schemes alone. The type of eyes the man has here, which are more like looking into galaxies than at eyes, were the first thing that attracted me to Amy’s art when I found her on Instagram (though it was a different set of eyes in an earlier painting). Is there a universe inside each of us? Both figures have antennas, which suggest and reinforce a non-linguistic interaction/interrelation. It’s a wonderfully fresh painting, both in subject matter and the bold colored shapes.

Her linear style allows for a striking compositions. Notice the very formal grids of the open window and wall paper, with the several shades of shocking pink. Peter Halley has made an entire career of painting abstracted grid forms that loosely represent windows and rooms. His “Orange Prison” is currently being auctioned for between $52,000-78,000.

Truth be told, I’m not really a “less is more, and much less is much more” kind of a guy. I like my peanut butter chunky, my ice cream with nuts in it, and my paintings with at least a hint of human presence. Come to think of it, in a beginning painting class at community college, I had an assignment in which I had to make a Peter Halley type abstraction using acrylic, drafting tape, and gloss medium (so that some areas were more shiny). You couldn’t assign making a painting like “Whistler’s Mother” to a beginning painting class. In other words, I’d much rather look at Amy’s painting, which I’m guessing sells for a tiny fraction of Halley’s. And that yellow against the pink in Halley’s work hurts my eyes.

Update: I reached out to the artist while writing this to ask what she sells her paintings for. They start at $425 framed, and the larger ones go for $600. Let me just do some math, here. If Halley’s painting went for $50,000, which is less than the minimum asked, and one of Amy’s paintings went for $500, that’s 1% of the cost.

[Incidentally, folks, it’s about time the era of dinosaur art came to and end, in which case a single painting by a handful of art stars — even if it’s just one of more than 1,000 formulaic spot painting pumped out by Damien Hirst’s underpaid assistants — is valued at more than the entire output of lesser known artists. My next article will be about the predictable falling prices of blue-chip art, and a new paradigm of art collecting.]

There’s something disquieting about Amy’s version of Whistler’s Mother, though. The blue man’s smile, and the conspicuous, tooth-paste-ad shine on his teeth, signal a dangerous artifice. There’s something about the cyborg, or android going on here. Both figures are smiling, but the red ant perched on the female’s shoulder, facing the man is menacing. Why are they so slap-happy when their home is infested with over-sized red ants (perhaps fire ants)?

The woman’s eyes are virtually obliterated by the concentric circles emanating from the glowing orifice between her eyes. And those circles merge with circuitry on her neck. Is she a hybrid being; part human, part insect, and part computer/AI? 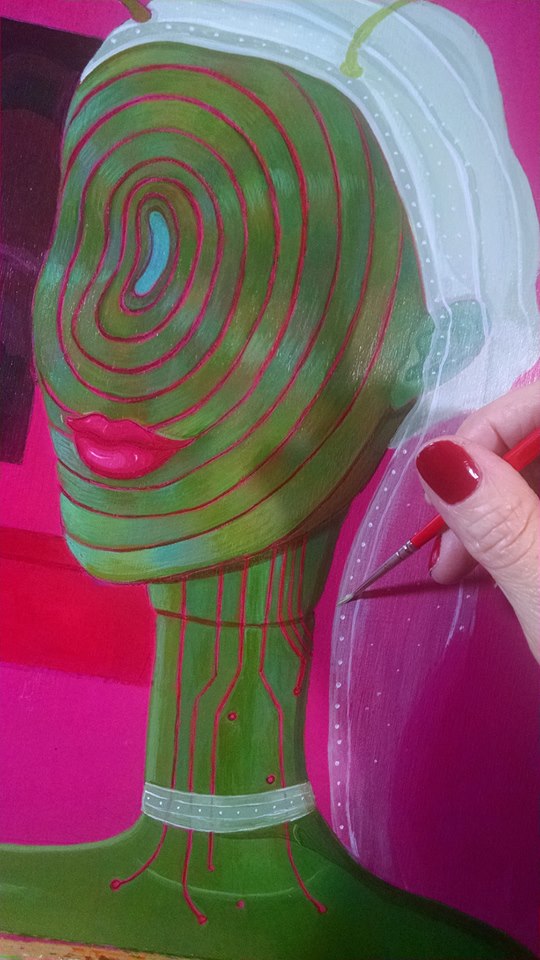 These figures remind me a tad of the more lovely examples of cyborgs in TV and movie sci-fi: Seven of Nine from Star Trek: Voyager; Number Six, who plagued Dr. Gaius Baltar in the remake of Battlestar Galactica; or the “Terminatrix” in Terminator 3. They are both seductive and menacing.

T-X, aka “The Terminatrix”

If the figures make one uneasy, one can always look out the window into the infinite expanse of the shimmering galaxy. Regutti’s rendition of Whistler’s Mother is obviously set in the future, and here we can see a prognosis where what lies ahead may be less human and finite, but more broad and universal.

Theres a significant juxtaposition in this painting of the minute and the immense, and that’s the proximity of a few of the  over-sized red ants with the sea of stars through the window. Where is this room? In space? 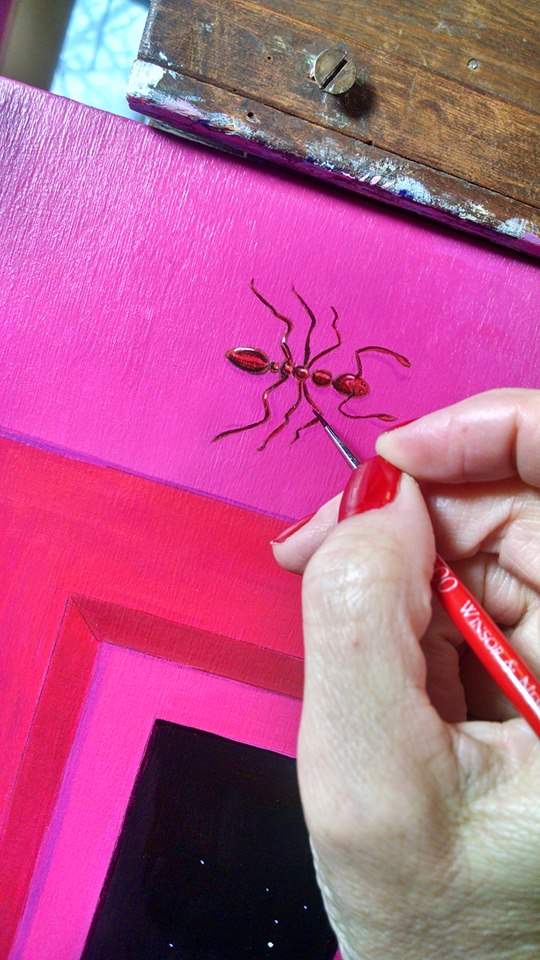 Something terrible has happened in a more recent work from July of this year.

I assume the woman is responsible for the man’s demise, or else the blue moths are, such as the one perched on the tip of his shoe. Did he succumb to the delicate touch of the moths, and was it at her direction? She still has a lipsticked, indifferent smile plastered on her face.

The bright yellow pants and argyle socks of the fallen man suggest he might be a pimp, or customer at the sex club behind her, where I gather by her stripper’s costume that she works, or did. Is she a villain or a heroine, a murderer or escaping bondage?

In this new, and more elaborate work, the artist has expanded her repertoire. The ground is included, and there’s a horizontal figure, which is indicated by his uptunred feet. The tableaux is more complex, and the implicit narrative inescapable. Notice his shoes are painted quite realistically, and even the texture of the canvas melds with the implied texture of the leather of the shoes. Is he human, like the woman in “After the Wars”? His more naturalistic feet suggest he might be.

While the people themselves are distant, with his head invisible, their feet are nearly touching, hers glowing green and artificial, his traditionally crafted of hide.

I may have put together a few pieces of the puzzle despite my disinclination to unravel the mystery, preferring to probe the paintings through visual intelligence rather than via interpretations about them in linguistics. In an earlier work, “Sarah Sees Two Moons”, a giant moth is tethered by a string to a, um, collar around a three-eyed, bald, blue woman’s neck. And she’s got the same two hearts tattooed on her neck as the woman in “Hansen’s Folly” and the one in “Failure to Comply”.

Regutti’s paintings are as if illustrations for a sci-fi story (or stories) written in a language one can’t understand. This sensation brings me back to being a child thumbing through books I couldn’t yet read, and instead getting absorbed in the pictures.

I hope the artist is able to continue to pursue painting so that we can see what scintillating images will surface when the next chapter of her painted story is unveiled. 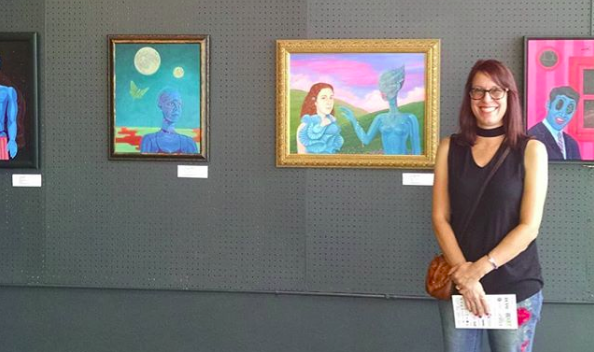 If you enjoyed this article, here are some other living artists you may not know, whom I’ve written about:

3 replies on “The tantalizingly Mysterious Painted Figures of Amy Regutti”