These people don’t exist. They are ghostly apparitions created in the mad scientist’s soupy cauldron of neural network technology. They presage a time when we can play God and fashion artificially intelligent digital humans who live and suffer in a simulated universe. All of the images are based on recent photos of me. If they seem creepy, I think it’s something like a visual equivalent of the incipient struggle of artificial identity to exist (the neural network is trying to fashion humans). They are replicants of me, struggling to live, but doomed to sink back into oblivion. What you see are large scale digital paintings I made as homages their fleeting existence.

These are the first four. There will be more. 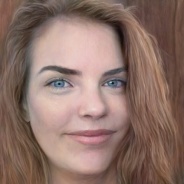 This series is, I think, more than meets the eyes at first glance. If you don’t know me personally it might not be readily apparent that these are variations on the same person. If you do know me you’d notice they all look like me but obviously none of them are me (I’m not that old and I’m not female). [If you wanna’ see what I actually look like, go to my “about” page.] The core of this warping of reality is the neural network powering the popular phone application, FaceApp. I used some of the images it created, tweaked them out in Photoshop, and then made them into large-scale digital paints (they are each around 2 feet in the longest dimension @300 dpi). As I suggested in the title, they are as if self-portraits from lives in alternate universes.

[I once went to a lecture about parallel universes which I found ridiculous, and I said so. However, the notion is that with each decision a separate universe is created for that path, and so on. It’s just so uneconomical (a universe created for a single variant of thought) I can’t even entertain it as true. Nevertheless, I think the idea of parallel universes in which some other reality is running – ex., one in which Bernie was elected – are interesting. I can envision these personages inhabiting such mirror worlds.]

Millions of people have downloaded the app, but I don’t know how many find it as fascinating as I do. There’s the obvious curiosity and humor in seeing what you’d look like old, the opposite gender, with various hairstyles, with glasses, etc. But what struck me was that some of the people the artificial intelligence created seemed to have presence. They are like Frankenstein’s monster. There’s a bit of playing God in inventing individuals out of thin air.

My girlfriend likes the one above the best because, “she’s the prettiest”. [You can vote for your favorite in a poll at the bottom of the post.]

I find some of the images “haunted”. Everyone knows about  the Native Americans who didn’t like to have their photo taken because they felt it stole their soul. That seems quaintly superstitious now, yet, the images capture some sort of quality that is recognizably me. Sure, it’s just physical appearance, some relation between my most conspicuous facial features, and yet it seems to capture something less tangible.

Above I seem to have gone a bit eccentric.

Notice how this series turns identity politics on its head in a way. With identity politics you are largely defined by the group your body belongs to (ex., middle-aged, white, male), but with these images it’s some intangible (perhaps ineffable if you pan back to how it applies to all people) quality that can be present in different bodies.

This guy above looks kinda’ broken down. Life’s been rough.

I do think the mind is much more plastic than the body. As I often prattle on about, consciousness can’t be found by science, and is a timeless, space-less, bodiless beacon of beingness.

Working on these images F’s with my head a bit. As I was working on the haggard old guy above, and then I’d need a restroom break, when I saw myself in the mirror I was surprised at how young I actually look. I’d been identifying with the old version of me rather strongly and started to think that’s what I look like.

She doesn’t exist, and yet her stare seems to insist that she does.

I remember early on feeling sorry for these non-existent people and that if I didn’t paint them (digitally) they’d cease to exist.

And among the multiple ways doing this work messes with my head and my fixed sense of identity, it has influenced how I see other people. I can now imagine other people as older, younger, or the opposite gender more easily. I start to feel that they are not just who they appear to be, but every possible mutation or variation.

In the future, if we don’t kill ourselves off first, I’m pretty sure we will develop something similar to the Matrix. You can already be an avatar in a multi-player video game online. Combine that with VR headsets and you are inside a 3D world. Now add a body suit and your are navigating in it through natural motion.

Elon Musk is so sure that we will develop this technology in the future, and that we will be able to create models of past civilizations that he honestly believes, chances are, that has already happened and we are conscious, mathematical avatars living in a simulated universe right now. I don’t believe that for a second, but I do believe we will create more convincing, more enveloping shared artificial worlds in which our identities are also highly mutable. I’ll save more of the philosophizing, of which there is more, for future posts.

My critiques of Musk’s theory that we are already in a simulated universe:

Do we live in a simulated universe? Yes, but not one created by aliens.

Do we live in a simulated universe, Part 2: Rejoinder to Nick Bostrom.

Note that some wanker in a philosophy forum banned me because he couldn’t hold his own with me in a debate on this topic.

There are not a lot of pictures of me because I don’t like to have my picture taken. [If I can get away with it I won’t celebrate my birthday either.]  I don’t think I have a single photo of myself from my 20’s or 30’s. And as an artist I very rarely do self-portraits, partly because it seems narcissistic, but also because I usually paint aliens, robots, monsters, and things from my imagination.

But here I’ve finally found a way to do self-portraits that I am comfortable with (which is not to say that they don’t make me uncomfortable), and it’s because I’m not directly in them. However, if someone saw a bunch of them and then ran into me, they’d probably recognize me. The images are self-portraits in that sense (spanning not only decades, but genders and lives) which is that cumulatively they communicate my essence as a thread that runs through all of them. I am invisible here, and that invisibility is the real self-portrait.

I try to make the images successful on an individual basis, but I think their real strength shows up when they are seen together.

I was a little worried about someone nicking this idea from me, doing a series of “self-portraits”, using FaceApp, but there are things that make it difficult, and even if someone else does it, the persona will be different. Further, there are some real difficulties in pulling this off.

And yeah, I’m announcing, as far as I know, I came up with this first.

The app only makes small images, particularly for the more extreme mutations, and then crops them close. You usually end up with a square image which is also so small it would print out postage stamp sized. Frequently the results are so distorted or otherwise bad that they can’t be used. Only some photos work and then here and there there’s a certain magic. Even then you have to do some photo editing before it looks good, and then the digital painting process allows one to make it a much larger image.

Here are some details: 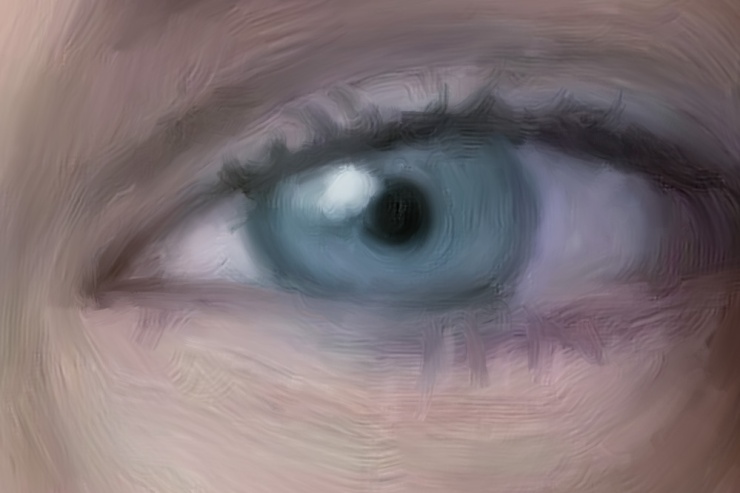 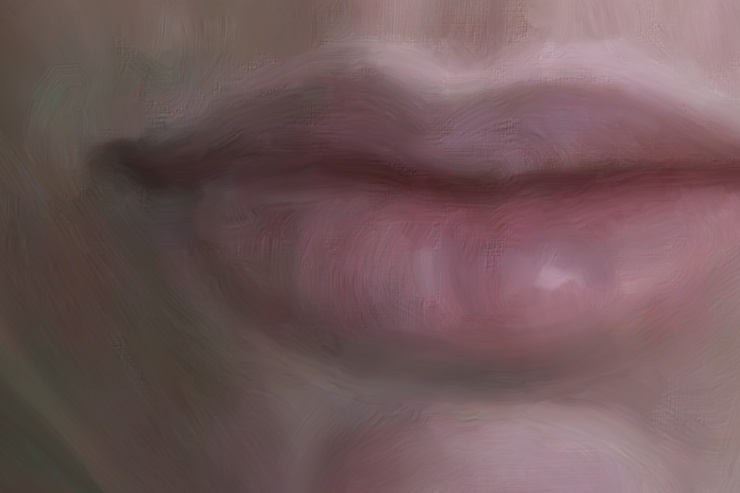 Below you can see the image FaceApp gave me, and then what I did with it (my version is also at least 20X bigger)

I think the appeal of this one is the app made me look like shit. I then made myself look even older and tried to stress things like the veins in the forehead, not as stand-out veins, but as vaguely visible underlying thinning skin.

And with this one I took even more liberties:

The image on the left had potential, but it wasn’t usable as is. I clipped the bangs myself in Photoshop, and generated the glasses on another head and then cut them out and transferred them to this one. The best part is the way she’s looking over her glasses, and the app didn’t do that. I had to remove the lenses and move the glasses down on her nose. And yes, despite the additional contrivances, I think the resultant image has more of the stamp of authenticity.

I don’t know if this series will really work for anyone else, but I always use myself as the measure. I like it so I’m planning on making some more. I may make them about half male and half female, so that if you saw them and you didn’t know me, you wouldn’t know which way it was going. You also wouldn’t know how old the original person was, because you can make yourself older and younger and recombine any of these things by feeding the resultant images through the neural network again.

Lastly, there’s a conceptual and process element to this work. You can’t just have someone else make the images for you (y’know, Damien Hirst paying a team of graphic artists to create the series for him and brand it, in which case I become the copy-cat), because in making them yourself you subtly interpret them and leave your mark. I make every stroke individually in the digital paintings. And it is ultimately about the human stain.

Vote on your favorite.

Funding. Through Patreon, you can give $1 (or more) per month to help keep me going (y’know, so I don’t have to put art back on the back-burner while I slog away at a full-time job). Ah, if only I could amass a few hundred dollars per month this way, I could focus entirely on my art and writing. See how it works here.

If an advertisement appears below, I have no control of it and get no proceeds.