Shitting on Michelangelo Makes YOU Great!

In the room the women come and go
shitting on Michelangelo.

Today’s offense comes from artnetnews, and is about a conceptual artist who figured out how to cut Michelangelo down to size, while elevating himself to mammoth proportions.

The idea behind the conceptual artwork above is that status changes, and what was once grand is inevitably toppled by something else. The article doesn’t say this, but if I was paid to hash out utter tripe, I might have said that dinosaur’s eggs were eaten by tiny rodents (one popular theory of how the mighty Tyrannosaurus Rex became extinct).

The artist proves his point by giving us only the lower half of the statue, below David’s pecker, and adds a little kitty and something its playing with, perhaps a fragment of the sculpture itself. Obviously we are in the presence of a grand, philosophical artist. This isn’t for your average museum goer, folks, you need to have your thinking helmet on, fully charged, and lights flashing. You are going to have to THINK.

And yet, it seems more like you’d be better off NOT thinking at all, and just scoffing.

Surely the article will elucidate to us how this sculpture upstages Michelangelo’s David, in terms of “status”, which the artwork has been reduced to. I went to the article hoping to find some explication.

The fact that the legs are a replica of Michelangelo’s celebrated work means they can’t be considered outside of an understanding of David’s status in the art world. That said, they are literally severed from that context, too, making an artistic statement that is wholly their own.

Right. If you replicate an existing famous art work, than it refers directly to that artwork. Got it. I think I didn’t even need that explained to me because how could it be otherwise? Now to level up to the next philosophical plateau. Ah, the legs are literally (kudos to the art critic for using the word correctly) severed from that context. So, you cut off the legs and you sever them from the body. And when you do that you also sever them from the context of the original sculpture as it exists in the Galleria dell’Accademia, in Florence, AND, more importantly, from its exalted place in art history as one of the greatest artistic achievements of our species.

And, y’know, this isn’t just ANY sculpture, it’s David, and David is the kid who took on the giant, Goliath, with a slingshot and won. So, it’s kinda’ like Rojas is taking on the evil giant, Michelangelo – a dead white male artist if there ever was one (note that the sculpture is WHITE)  – and freeing all of us from the tyranny of the status of the old master artists. And thank fucking God Rojas had the courage to do this. Imagine if we went around appreciating the art of our ancestors like they were our equals, or if they worked really, really, really unbelievably hard and strove like absolute muthafuckas were even better than us. Hell no! We have smartphones, for one, and there doesn’t need to be a two. Smart phones alone make us smarter than Michelangelo, and that’s a fact.

Villar Rojas’ installation does a job of interrupting the established status quo, calling into question the supposed supremacy of any particular artwork. Here David’s legs… serve to remind the viewer of the seeming inevitable decline of empires and the ephemeral nature of status in any one era.

I guess that’s it. So, I need to really concentrate on this nugget and see if I can decipher the deep meaning. There is an uninterrupted status quo, which just has to suck, right? And this status quo holds some artworks, like David, as supposedly having supremacy. Remember, the sculpture is WHITE, and has supremacy. So, even if the author didn’t belabor this, we can also see this as an attack upon the institution of systemic white supremacy in the art world. Rojas, like David, is toppling an empire, and within that very empire Michelangelo is held to be a veritable GIANT of art. And isn’t this the age-old, cliché of the “white male genius”? Pah!

The article is short on text but has 10 large photos of Rojas’ “Untitled” which, über ironically show it displayed as the NEW STATUS QUO. I mean, does this not LOOK like status quo to you?

Well, I beg to differ about this work. I’m calling bullshit.

First off, the least we can ask of conceptual art is that it have a new or challenging idea, since it’s all about the idea, even if there are 10 lovingly professional photographs aestheticizing the living shit out of the ungainly, truncated clump. Well, this idea adds nothing new to Duchamp’s painting a mustache on the Mona Lisa way back in (let me look this up for you) 1919. For convenience, let’s just say a century ago.

An astute reader who thinks for her or his self might want me to explain what these two works have in common more than poking fun at the old masters. Well, one is the presumption (bankrupt as it is) that if you can make fun of something, that means you are above it, bigger than it, in the same way David taking down Goliath makes him the greater warrior. If you can piss on someone, you have supremacy. But you want more evidence. Was Duchamp’s mustachioed Mona Lisa really saying the same exact thing as Roja’s cleverly titled, “Untitled”?

I quoteth Wikipedia (which is the first source for easy bullshit detection):

Primary responses to L.H.O.O.Q. interpreted its meaning as being an attack on the iconic Mona Lisa and traditional art.

The creation of L.H.O.O.Q. profoundly transformed the perception of the Mona Lisa. In 1919 the cult of the Mona Lisa was practically a secular religion of the French bourgeoisie and an important part of their self image as patrons of the arts. They regarded the painting with reverence, and Duchamp’s salacious comment and defacement was a major stroke of epater le bourgeois (“freaking out” or substantially offending the bourgeois).

The wording is slightly difference, but the essential idea is the same. The artist took a crap on a masterpiece, and in doing so, elevated himself to grandmaster status.

This didn’t work with Duchamp, and it doesn’t work with Rojas a century later. There are art critics who claim Duchamp is on par with Michelangelo and da Vinci (I’ve quoted them elsewhere and can look it up if anyone doesn’t believe me), and Rojas is trying to play the same game.

It’s bad enough that Duchamp chumped the art world once, but do we have to be so stupid as to fall for the same old gag again? And is it even a useful idea that the great art of the past is entirely dependent of extrinsic “status” conferred by others? I would easily counter that if you are a fan of art, and rather like a lot of art, you can tell that some art is really good, just like you can tell some music is really good, and THAT is why it is good, not the bullshit status conferred or withheld by others. Let’s not forget Van Gogh had no status in his lifetime. Great art survives because of its intrinsic merit and even timeless qualities that we relate to as humans, across time and geography, and not because this or that rich fuck or know-it-all bullshit critic (enter Clement Greenburg & Rosalind Krauss, for example) says it’s important. Or at least that was the case until now.

Michelangelo’s David is evidence, just like the pyramids, or the cave paintings in Lascaux, that while empires may fall, art, if it is not destroyed, has a way of enduring. It is STATUS that fails, not ART. What Roja’s “Untitled” ironically states is that the quality of art is extrinsically decided by the art audience, it’s rather arbitrary, tastes change, and utter bullshit can be heralded as supreme by purely extrinsic and even fallacious ideas. It argues for it’s own ephemorality and insignificance on inception. Like Duchamp’s urinal, it declares to the world, “I am insignificant, and therefore, all art is insignificant”. And that’s why it is sooo great. It is the kicking down of other people’s sand castles and declaring oneself the master sand castle builder.

And if you’re still not convinced, just imagine the musical equivalent. We take, say 10 minutes of a Mozart symphony, then we add a track of a kitty-kitty mewling on top of it. Now we have removed Mozart’s music fron it’s original context, and shown it to just be hype that status was arbitrarily assigned to. The new “music” we produced outshines Mozart and shows he’s bunk.

Don’t worry folks, we don’t have to shit on everything great from the past and embrace futility, cynicism, and even stupidity. We can even try to achieve great things with our own lives, and in our own art. Shitting on Michelangelo is just stupid. It’s not David knocking out Goliath with a mere slingshot, it’s a weakling pissing on David while he’s sleeping. 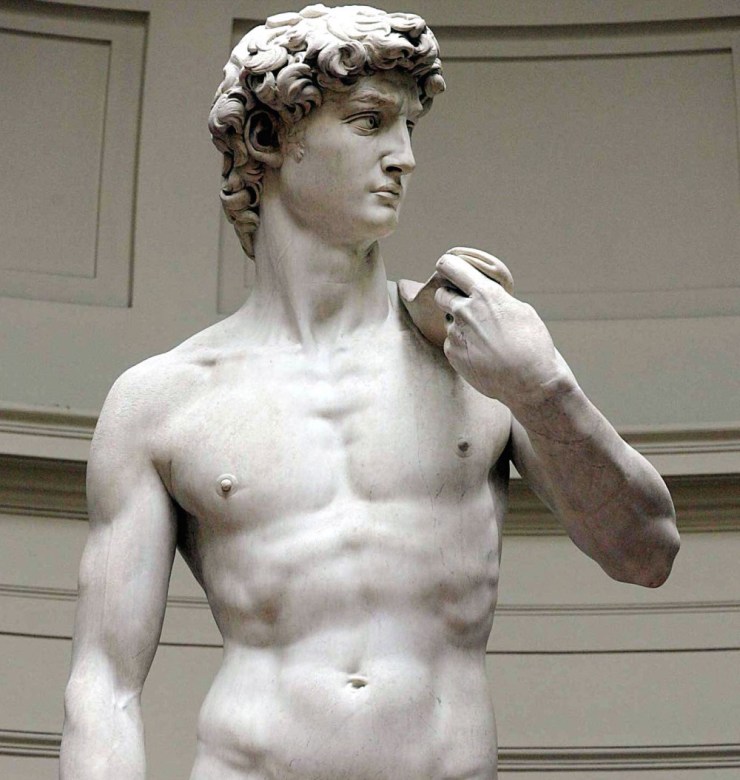 Michelangelo will continue to speak directly to people long after Rojas and Duchamp are forgotten. It is their art that is propped up by status, and that loses significance once it’s removed from the gallery or museum.

And if you read my last article about No Hands Art, this is a perfect example of the kind of art that is held as superior because it says, fuck art and fuck artists.

Here’s a selection of some of my art, ‘ncase you were wondering:

7 replies on “Shitting on Michelangelo Makes YOU Great!”

New art: Vehicular Monster Slaughter 01. This one's a collab with AI.
Blue headed tree Agama lizard in the local park. I didn't adjust the color at all or use a filter. That's how nature made him.
It took me far more time, effort, and skill just to make the graphic than it did for me to have AI make the digital painting for me.
New art: Misfits of the Metaverse No. 8.
Misfits ot the Metaverse 7.
Graphic I made for my blog post. Everybody seems to know and admire Pulitzer prize winner for art criticism, Jerry Saltz. But he ain't no Robert Hughes. In my latest article I dissect 6 times he face-planted astronomically. Link to my blog in profile, or copy/paste: https://artofericwayne.com/2022/03/12/better-call-saltz-or-not/