Originally I wasn’t going to include this piece in the series, partly because it was comparatively easy for me to produce, and partly because it was an experiment. But it’s grown on me, and while the execution was easy for me, the necessary background of knowing the software, having done lots of similar experiments, and having a fine art approach that includes an appreciation of abstract art and a cultivating of an intermediary zone between abstract and figurative art wasn’t easy.  But the main reason I decided to include it was that I used a very systematized approach for this, like a game (see original post below), and when I tried to reproduce something similar without using that approach, I couldn’t do it. It has a Surrealist and Jackson Pollock quality to it, and reflects my interest in abstraction and visual language experiments.

It also shares with some of the other works contrasting elements I like to bring together such as spontaneity/control, traditional look/digital means, abstraction/figuration. Overall it’s part of my exploring what I can do with visual imagery, with a pronounced emphasis on line, curves, and movement.

[Below is my original post, when I decided to share this work, but didn’t take it seriously enough to include in my series. As I said, it’s grown on me a lot.]

I know, there’s a dot in there. That was a tap of the stylus. I like to do some experiments and exercises. I like to work in some loose, free lines into my art. You can see this sort of thing in #25 of my “Imagine That” series [below], but this one’s a bit light to qualify as an actual work.

Though, I’m planning something similar but a bit more elaborate. In this case I had some artificial parameters. Remember, I ‘m working digitally (which, ironically, can really allow freedom). So, I make a line, and then I can move it. But that’s it. I can’t go back and change a line once I add a new one. A more complex piece would allow me to change everything interchangeably. This is more like a game. I was allowed precisely 100 lines.

I did a whole set of “Text Paintings” using similar methods. I also haven’t included them in my portfolio, but 2-3 of them might be good enough. 122 is ghastly and was the first one I did. But it does have 122 names using all my fonts. All of them had rules. I used a random number generator to decide the size of the font in some, for example, and even the angle of the  text.

Here they are if you missed them, which you most likely did: 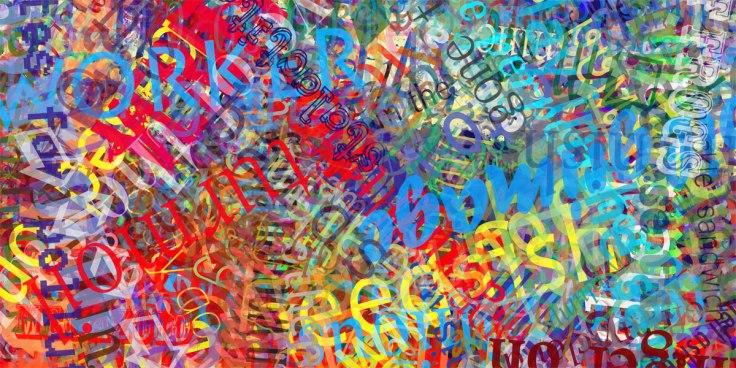 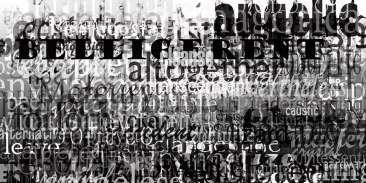 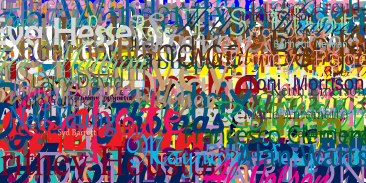 I’m working on a few pieces at once, each in a different style. One is a more complicated version of this exercise. One is somewhat similar to #25, like a pastel drawing. And one is a “digital impasto” piece like my last two. I find I can get more work done if I switch up what I’m working on.

Doing experiments like this is something like training for a boxing match. Sometimes you just work on your jab so that when the time comes for you to get in the ring, you have several strengths that you can combine.