This one shows some abstract design elements and a bold composition. What it exactly is isn’t exactly specified. I’ve left it loose so there’s room for imagining and interpretation on the part of the viewer.

Just a bit about the technique. Well, I get the impression lots of people are impressed by art that shows lots of tedious work with tiny brushes, hence all the snaps on Instagram of a work in progress with a tiny brush in front of it signalling the countless hours of precision drudgery the artist suffered to execute the work in question. That’s a process I’m trying to avoid (for others it’s an almost spiritual devotion I don’t find fault with). I would much rather suggest something than get too caught up in rendering every little detail.

In the B&W images I’ve generated within this series, I’m not really worried about proportion, anatomy, perspective and so on being accurate.  It really is more about the feeling and overall design of it. A l0t of this is also about the textures. And another part is the illusion of 3D, such as in the snake-like form.

I’m quite fond of these B&W drawings, partly because of the sheer economy of them. How much can you say using just B&W? It’s kind of like a guy sitting down with a guitar and singing, and with no other instrumental accompaniment, or maybe a piano sonata.  I think most people when looking at this can understand what sort of process produced it – drawing – and then can hopefully appreciate how much was done with just that.

Addendum: When I finished this and titled it, I had no idea America was launching missiles into Syria under Donald “instant war-hawk” Trump’s rule. I’m going to switch channels now and watch the movie where Bernie Sanders was elected president. Oh, shit, it’s not a movie. This is madness.

Here’s all the drawings that happen to be in a very similar style (and quite different from most the pieces in the series so far): 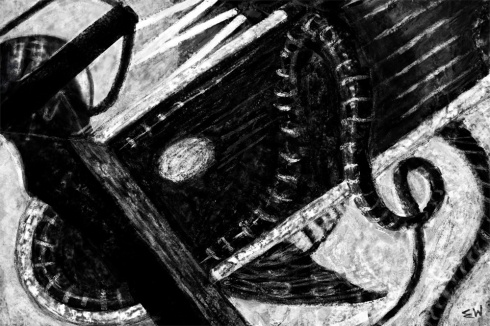 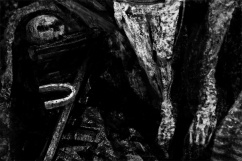