3 Preliminary Drawings, and a Practice Painting

Hi folks. I did a few preliminary drawings last night. I inverted them to see how they’d look white on black, and then worked on them in that mode. Different things come forward in the negative. 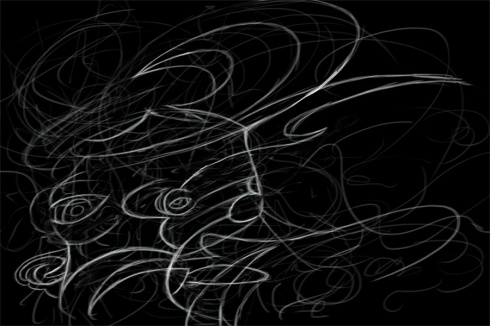 Here I’m going for a more abstracted drawing. I’m thinking of making all of these into paintings to see what happens when I put them in color, and so on. My last piece kind of bugs me. It’s good, and compliments the series, and in some ways I suppose it’s the best, but, I think #4 was more experimental and forward-looking for me, so I want to explore more in that vein.

Artists can be so competitive and egotistical that it’s rarely a good idea to offer up criticism of ones own work. I’m not really like that myself, and I was usually supportive of my fellow artists during critiques, and reserve my ire not for struggling artists and amateurs, but for multi-millionaire, blue-chip artists who can afford to take the hit and laugh it off, if they were somehow inclined to register it at all. I also promote other artists on my blog, and don’t consider them rivals or competitors. But I observe other artists being steely and looking for anything to rip apart.

So, here it is. The thing that bugged me about my last paintings was that it came out a bit “Kung fu Panda”. Now there’s a good laugh. And just let me rant a bit. When I was in grad school, if there were any flaw or weakness in ones work, it must necessarily indicate a greater, encompassing, and pernicious character flaw, which in my case, because I’m a white dude, it was always an unconscious allegiance with patriarchy, white supremacy, colonialism, modernism, capitalism, and misogyny. Worse still, I refused to acknowledge it, and was thus “in denial”.  I should say I wrnt to a radical, conceptual, political college in which identity politics were taught instead of art in graduate seminars. I would say my degree is actually in gender studies, marginalization theory, queer studies, race politics, and social justice, sometimes in the context of art. Alas, I reject that whole perspective, at least partly because it outright rejects me, and point out my own mistakes or things that bug me, and see doing so as a relief from more stringent and linear perspectives on reality. End rant.

Meanwhile I continue to do “practice paintings”, which mostly consist of copying still life paintings. This one took me an hour to reproduce.

Imagine, if you will, combining this wort of rendering technique with the line drawings. That wouldn’t exactly happen, because the line drawings don’t articulate natural three dimensional forms. Nevertheless putting them in color will require some lighting, shading, and modeling …

The reason for the practice paintings is to hopefully make the sort of naturalistic rendering process more second-nature. I prefer to make images just using my imagination and “instinct”, rather than calculating how to do this or that effect based on theory.

I’m kind of excited about the drawings because they are more abstract than I customarily work. They have a mix of Picasso and Francis Bacon to them. Hopefully the experiments won’t go awry and produce abominations.

I’ve also switched the aspect ration from the first 6 paintings in the series, from 3×4 to 4×6, which means they are more horizontal. When I was younger I nearly always chose to make my paintings in a “portrait” rather than a “landscape” orientation. Now I’ve completely flipped.

As I’m working on this series, I realize two things. 1) Is how ass-backwards it is, and completely out of step with contemporary art. Making expressive paintings from the imagination?! God help me. I am a lost cause, or as one of the writers at Hyperallergic accused: “irrelevant”. 2) What I’m doing is straight up, and the core of visual art. This is for the exact same reasons it is anathema to contemporary art. When the most celebrated, revolutionary art object of the 20th century was a urinal carted into a gallery, which was a flat, stolid denial of imagination, originality, authenticity and making a unique item of any kind, working directly and only from the imagination to make a technicolor image is the polar opposite. I’d say there’s something to be said for doing everything wrong, or against the grain, but, it’s a better argument to say there’s something to be said for attempting to do something very direct and central, which is only against the grain because the dominant strain is anti-art.

I’ve often thought this about art – What if an artist were imprisoned in a cell for a year with only a supply of paper and #2 pencils. What would he or she do? That is an essential challenge of art. There are all the things one can do besides make an image, but if you had to sit down and make an image, what would you come up with? I, of course, have a musical analogy, which is being given a chair, and an acoustic guitar in ones cell. If you are a musician, even if you don’t presently know how to play the guitar, well, you have a year in that cell. Will you smash it to bits and call it a “sound sculpture”? Or will you figure out how to play it and write some songs and sing them? And what will you do with that pencil and paper? After tearing up sheets and trying some pseudo-conceptual projects, will you realize that with this limited means (no tons of polished chrome to be molded by hired artisans into the facsimile of a balloon animal), your only real hope is to draw something?

This isn’t to delegitimize whatever other artists are doing. Chances are strongly that I’d merely deligitimize myself if I attempt to do so. I should say the chances are overwhelming. It’s just to say that the test of true contemporary art has so long been what one can do after one completely rejects creating imagery from ones own resources, that it may be there is more than one test, and the other is what can you do with only your own resources.

And this brings me back to the guitar, the chair, and the cell. Some of my favorite songs are mostly just that: John Lennon’s “Working Class Hero”, Bob Dylan’s “Masters of War”, or Kimya Dawson’s “12/26”. What the hell would one sing about? What melody? I find it an awesome challenge. I have none of the requisite skills, however, to do so myself. But I can make drawings from the imagination, with subject matter, and color.

This series is really just drawing. Let’s see what the hell I can come up with. So far, I think they are pretty good. This isn’t a new approach for me, but I’m giving myself time limits, and excluding things like looking at reference material while making the art. There’s a kind of ownership one has over an image that is the result of only ones own skills and the content of ones own mind.

10 replies on “3 Preliminary Drawings, and a Practice Painting”