I almost can’t believe I finished it. It’s kind of uncharted terrain because of the combination of approaches, programs (I used 5 programs), and styles. Sometimes I surprise myself, which is what keeps me going making art. It’s not the 85 cents in donations I get per month, assuming I finish a significant new work. This is some cool, weird shit. My first piece in this series was much more Expressionistic/Impressionistic, but as I looked at it and other “paintings”, I noticed a tendency to have a sort of straight on viewpoint that keeps things flat.

So I taught myself Zbrush, and sculpted my second monster. This monster was my first attempt at 3D sculpting, so it took a while and I kept having to look stuff up when I ran into trouble. Early on it looked like this:

Later I got a lot more details going on:

Then I got the bright idea that since it was a digital sculpture, not only could I rotates it and whatnot, I could easily duplicate it and have two creatures. Of course, I got this idea because I couldn’t really decided on one angle that captured it the best, so wanted two simultaneous angles.

Zbrush wasn’t giving me as much 3D perspective as I wanted, so I had to take the models into Blender, and try to remember how to use that program, which I spent a lot of time teaching myself about a half year ago. I forgot most everything. But eventually I got a good composition and lighting situation set up.

Next I had to get it in color. You can paint stuff right in the 3D programs, but I didn’t wanna’ mess with figuring out how to do it in Blender, so did the whole thing in PS.

And once I settled on a color scheme, I had to paint it. For this I have to consult my notes, because I’ve been elaborating my “digital impasto” technique for years, and it’s a bit convoluted. And, oh, shit, I forgot to give them nipples. Had to fudge that in the painting stage. Some other tough things were making the eyes, which as a sculpture were solid, into globules with reflections.

Here are a few details: 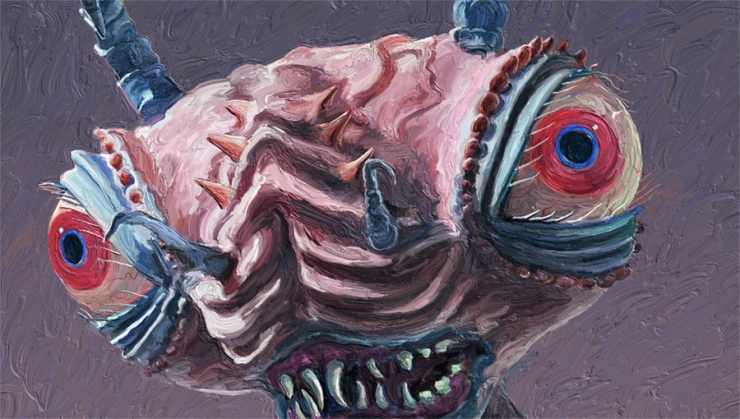 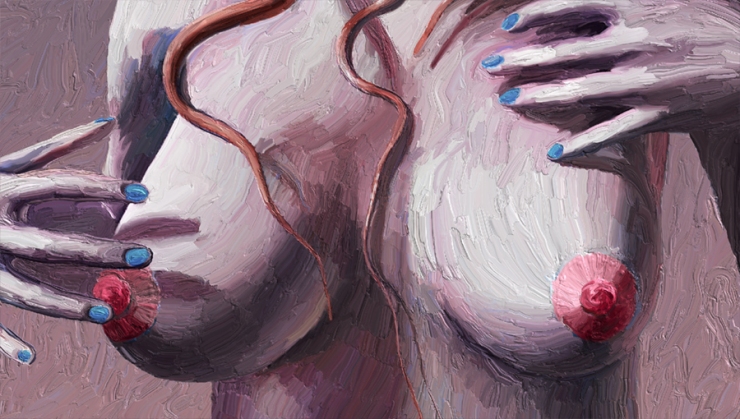 If you’re wondering why the hell I’m making monsters with boobs, well, I explained it in the post on the first in the series. It’s not a comment on women, not really, but more a comment on men, if you are looking for the political angle (though that’s a small part of the art).

I have an idea for the next one that will also use all the techniques I used in this one. Stay tuned.

And if you like my art and art criticism, and would like to see me keep working, please consider making a very small donation. Through Patreon, you can give $1 (or more) per significant new work I produce, and cap it at a maximum of $1 a month. Ah, if only I could amass a few hundred dollars per month this way, I could focus entirely on my art. See how it works here. So far only ONE PERSON supports me here, and I get 85 cents out of the $1. This tells me the world wants me to stop making art. That may happen.