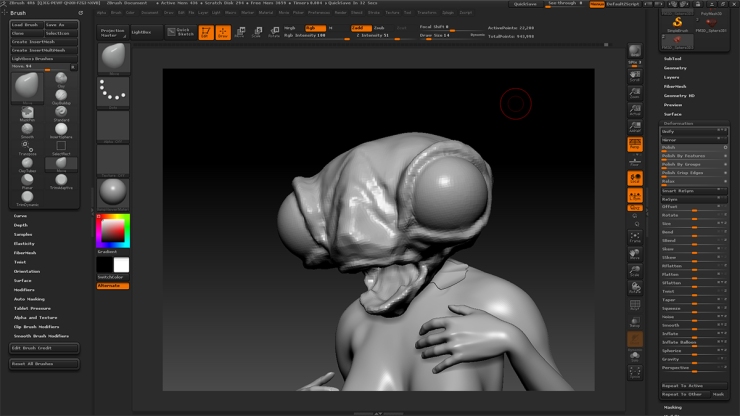 My first Monster Maiden didn’t involve any 3D software. There are a lot of different ways to “concept” monsters, and they will give different results. For the last one I started with a few photos, and then just drew over them in Photoshop to design my monster. But when thinking of all the possibilities of monster maidens I could come up with (stay tuned, I’ve got some good surprises in store) I considered different perspectives. I’d worked with Blender before to make my robots for Infinite Objectivity, so know the advantage of sculpting something digitally, which is that you can then rotate it any way you like. So, for this monster, I decided to use ZBrush to sculpt the monster head in order to add another range of possibility to the skill set I’m working with for this series.

So far I used Makehuman to create a figure, then posed it in Blender, then brought it into ZBrush to work on sculpting a monster head. At this point it’s just starting to look like there’s promise. After this stage – there’s a lot of work left to be done on that head, and integrating it with the body – I’ll probably bring it back into Blender, then it goes to Photoshop for heavy work fashioning a background and to be colored and drawn over, then to Painter for really a lot of work, and finally back to Photoshop for final touches.

I just learned ZBrush, so my sculpting is a bit clumsy. It’s not an easy program, but a lot easier for me than Blender. I don’t work fast, so this may take a couple more weeks to finish. It won’t look much on anything like it does now. I’m not sure what to do with the nose. Might give it antennae. Think there will be teeth. Segmented eyes? I also have to make it less like monster #1.