Richard Prince’s copy of someone else’s instagram sells for $90,000: the good news, and the bad news.

I’ve written about Prince’s lame Instagram appropriation series before here, so don’t wanna’ spend too much time regurgitating my own shit (ew, that was a little graphic). I guess I should do a quick synopsis first, then move on to the good and bad news. Prince made 4X6 foot printouts of other people’s Instagram posts with his own comments added. His comments are his justification for adding something to what he is appropriating, and insurance against being sued for copyright infringement or theft of intellectual property. He can say ,”I added something”. The specific content of the Instagrams in question is rather irrelevant, because it’s the overriding idea of exhibiting other people’s throwaway posts as high art that constitutes the priceless alchemy that is the actual piece. If the Instagram posts were already considered valuable, it wouldn’t be an act of turning water into wine. So, like the work of unacknowledged artist’s assistants, the original content is contextualized as devoid of meaning until put on a pedestal by an art luminary, and critical insider, in this case one Richard Prince.

In the pic above I used Photoshop to replace one of the Instagram pics Prince used with some other one I culled from the net. Can you guess which one? Does it matter? I did the same thing in the shot below.

I think that’s fairly conclusive proof – if you have no way of telling which ones don’t belong – that it really doesn’t matter at all which Instagram photos are used. It’s all about the idea. And in this case, the series is the epitome of the fall of appropriation conceptual art. At the core of appropriation is “recontextualization”, which means “looking at something in a different light”. This mental shift of the mundane into the transcendent (or Postmodern mystical mundane) has been around so long that college graduates were born after it was already a bit musty. For me the prospect of bare naked appropriation is as exciting and appetizing as hors d’oeuvres of library paste slathered over cardboard with a sprinkling of dust and a dollop of vacuum cleaner bag lint on it. The real problem is that appropriation was conceived as important, shocking, and challenging decades before everyone had their own personal computers and began appropriating and recontextualizing jpegs, gifs, videos, and quotes willy-nilly as a matter of daily internet intercourse.

Every time you post a cat graphic on your Facebook wall you are “appropriating” and “recontextualizing”. You’ve moved something into the Facebook wall or reader arena, which is a new context for it. That’s all Richard Prince is doing. Prince just moved content into the white-walled art institution gallery space, called it a day, and took it to the bank. And where is the fictive white, middle class, conservative faction that is supposed to be shocked or even get something out of this? It’s like trying to shock people with nudes, and pride oneself as being revolutionary in doing so, when much of the general populace is already hardened on hardcore porn. This is just preaching to the choir: making offerings to the priests and patrons of a bygone religion. Stop and consider what the musical equivalent would be: something like playing a list of songs from my Itunes and calling it a concert by me.

Appropriation art only becomes shocking to the public when tens of thousands, or millions are spent on it, while most of the rest of us are losing our grips on the grating we’re desperately clinging to before freefalling into an abyss of financial destitution. In reality the appropriation artists, the art institution and gallery/museum paradigm, and the buyers of their artifacts are themselves the cultural conservatives bolstering their decades-old version of reality which positions themselves at the pivot point of the turning world.

What the hell’s the good news in this shit? For an artist like me, who works using a computer, it’s a positive note that a digital work that took a moment to produce is selling for nearly $100,000 in the blue chip art world. That means there’s hope that something I spend weeks working on, painstakingly, could fetch 1/100th of that, someday, if I’m lucky, or at least that it won’t be barred completely from making any money at all. There’s an extreme prejudice against art created using the computer, unless of course it is then painted over by artist’s assistants (see Jeff Koons’ paintings), or if the work is by an art world luminary and required no significant work from the artist or assistants. Still, there’s no barrier to the acceptance of printed digital art as fine art. That’s good news. But how do I get the kind of recognition that makes one of my prints of digital art something valuable, instead of worthless?

Getting acceptance into the art world is harder than making worthwhile art, and requires an initiation into a cult religion of sorts – something like Scientology, but without the aliens. Well, a belief system with various cult figures and acceptance of their paradigm of reality, anyway. You pretty much have to buy into the system, or be so unfortunate that you get accepted after-the-fact as a tragicomic, and thus sympathetic “outsider”. You can’t just make the work and put it out there. You need to move up through the ranks like a boxer, with a promoter who is capitalizing on you the whole way. And you need to believe in the validity of things like Postmodernism and appropriation. If you can understand them, dismantle them, and offer a more nuanced take on reality, that’s not OK, unless it’s done through the proper channels, is accepted, and assimilated into the fold of the art institution.

I’m not really an outsider to the teachings of the artworld. I have a Master’s degree in the field (my gaduate thesis was a conceptual performance/installation piece). But I don’t believe that Duchamp is the Lord, or that Andy Warhol isn’t boring, or that objectivity is utimately a pernicious form of subjectivity (see my article on How Postmodernism Has Worked Aginast Us). I have the robes and the scepter, but I’m not a believer. I renounced the religion of Postmodernism, and conceptualism. I am self-excommunicated.

I have my own beliefs which are in opposition to the main tenants of the art world.

So, there’s hope in that digital art can be accepted as high art in the gallery/museum context, in which case it might be possible to earn a bare bones subsistence existence that allows one to at most continue to make art. However, you need to play the extrinsic game of going up through galleries and appealing to authorities in the art world, and you need to support their cause in order to get your slice of the pie. In other words you have to be subservient to the art world and its vision of reality. You have to join the cult, and be a freelance employee working for the gallery/museum system and the rich buyers who fund it.

I’m holding out for the Rocky Balboa thing. I’m optimistic that if I can make solid art, it will eventually get some recognition.

One source who Prince appropriated art from has decided to retaliate in a way that subverts the underlying concepts that lend his work legitimacy. Prince followed the fashion company Suicide Girls on Instagram, and used 4 images of models from their posts in his show, which is quite a lot. Prince merely added a comment and then printed out the post. The founder of Suicide Girls, Selena Monney, is now selling the same images, printed out in the same way, for $90.

Below are the other three images Prince used. 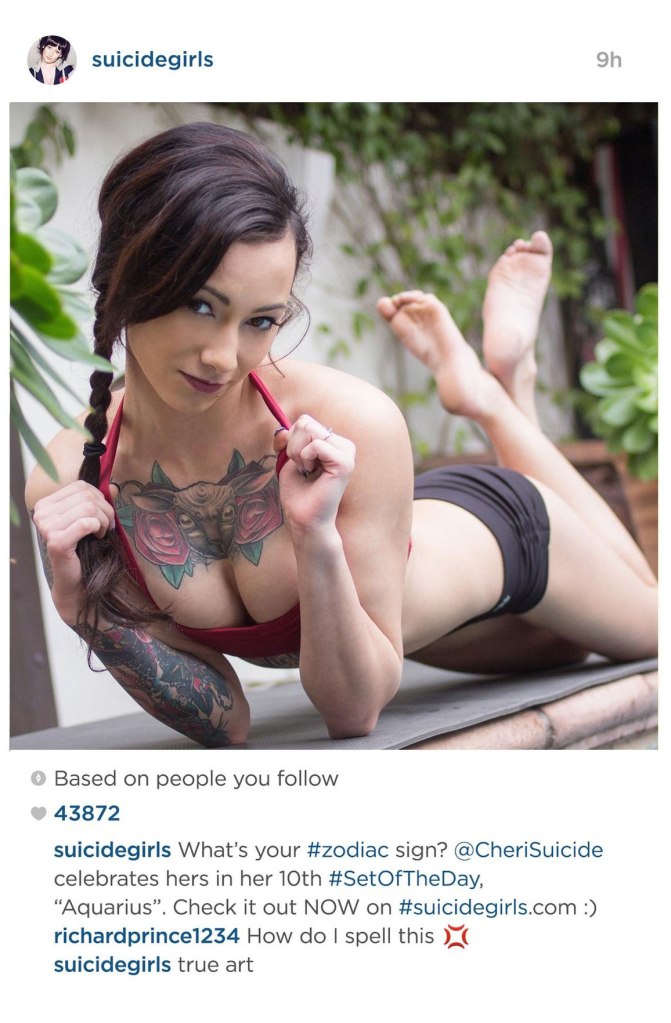 Selena Monney’s comeback is devastating. It undermines the sale of Prince’s art because you can get the exact same thing for $90 from them, and they have a lot of legitimate claim because all but Prince’s offhanded comment is their original content anyway. It also deflates the authority of Prince’s art by showing just how easy it is to make. We can all print out other people’s Instagram posts if we want to by walking into a decent printing service shop and making an order.

Another question occurs to me, and that’s a legal one. Will Prince or his gallery attempt to sue Suicide Girls for compromising his ability to sell his art? Sound preposterous, but the tactic would be that the Instagram posts were not the art, but making large prints of them and putting them in a fine art context was. In other words, the appropriation was the art, and the original professional photography, which was intended to be alluring and edgy, was not. He could argue that the concept was the art, which makes sense when you think of it as conceptual art.

The problem though, is that people have caught up to appropriation, and left it clattering among tumbleweeds in the dust. All Suicide Girls need to do is the same sort of rhetorical sleight of hand as Prince. They can just say that what they did is “re-appropriation”, or the re-contextualization of contemporary art into a modified product in the commercial, fashion sphere. They can even call doing that a performance if they want to. They didn’t steal his idea, they came up with a new one. Just one-upping his one-upmanship.

Looks like Prince made a terrible miscalculation in thinking he could just rip off other people’s art without them being savvy enough to slap him back on his heels. From my perspective, the Suicide Girl’s re-appropriation of their own work is more interesting as an idea, or as conceptual art, than Prince’s mere appropriation.

[If you want to read a glowing praise of Prince’s Instragram series, to see the other side, I recommend Jerry Shalz’s fawning schmalz here.]

6 replies on “Richard Prince’s copy of someone else’s instagram sells for $90,000: the good news, and the bad news.”

Today's flashback is from 2017. It's a digital painting done spontaneously, and using one brush in Photoshop. It's called, "The Pool". Notice the pool is created by the implicit wings of the green creature with one large orange eye and, uh, breasts. In the pool is an Impressionistic reflection of an old king, ruler, whatever, catching his reflection, and above his head floats a disembodied brain. No AI.
Today's flashback is a 3x4 foot expressionist sort of acrylic painting I made over 30 years ago. It's called, "The Bell Ringer".
Today's Flashback is, "Claw of the Mantizoid" from January of 2015. The close-up detail of digital impasto brushwork is what makes this image. It's my custom technique, er, one of em.
Deal of "Separation". I never finished this one. Started by must making marks in color in Photoshop and then seeing what develops. Will have to go back and finish it one day.
"The Monster in the Mirror" by me. I made this one from making marks in Photoshop, and then just building on whatever I saw and refining it. One brush.
Flooded street in N. Thailand this week.