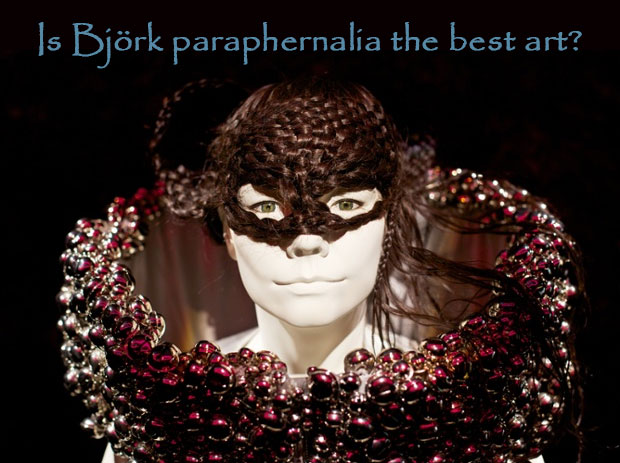 I wouldn’t bother writing about such a piece of fluff if I hadn’t read several reviews in which the critics bent over backwards, and forwards, to not address the central problem or issues of the exhibit, or else denied it. Everyone is panning the show because of how it was executed, but also being extremely careful to NOT say that the idea is itself bad. I suspect they are afraid to. So, I’m just going to say the painfully obvious, because the critics are cowed and shaking in their boots at the prospect of articulating the unwelcome truth that will make them look like they are out of tune with popularity.

No, Björk’s music isn’t good enough to be in the Museum of Modern Art!

Not unless we also include a laundry list of other pop musicians who are equally deserving, or undeserving. Madonna? You’d be mad not to. Lady Gaga? Sure. Beyoncé? OK. Bob Dylan? Definitely. Neil Young? Why not? Michael Jackson? Goes without saying. The Beastie Boys? Of course. Snoop Dogg? Without hesitation. Marilyn Manson? Now that you mention it. The list could go on and on. Freddy Mercury exhibit. Couldn’t do without it. But, let’s just get this over with and do back-to-back retrospectives of Miley Cyrus and Justin Bieber

It’s fucking pop music! That’s the problem. Being a pop music celebrity doesn’t automatically put you on par with the best visual artists (and, significantly, NOT necessarily among the best musicians), um, in the field of visual art. Let’s just give the Nobel Prize in Literature to Eminem for his lyrics while we’re at it. Unless we also want to give that to Björk, or Bieber.

And before people who love Björk get all bent out of shape at me, SHE didn’t even want to do this exhibit. MOMA has been after her to do it for over a decade, and she finally agreed three years ago. This was something the curator, Klaus Biesenbach, dreamed up. Meanwhile, Björk is said to have asserted in regards to how the show should be constructed, “First and foremost, I am a musician”. Typically, and not surprisingly, musicians are NOT really about conceptual art, which would tend away from things like being able to play an instrument well. Björk wanted the show to be about her music, but it had to be about something else to be at MOMA.

Björk can only fit into the “fine art” category as some form of “conceptual art”, when in reality she is anything but a conceptual artist. She’s a traditional musician whose ancillary props and marketing strategies were used as justification to re-brand her as an avant-garde, multi-media artist. This was done not in order to elevate Björk to grand master status, but to try to popularize contemporary art, which hasn’t captured the imagination of the general public. In other words, if art isn’t popular, make what’s popular art. Björk didn’t need a MOMA show. MOMA needed a Björk show.

I’m quite certain more people have heard of Björk than all of the living visual artists combined. Everyone has already heard of her because of her pop music. Did I say “music”? I meant conceptual “sound sculpture”. How do costumes made by other people for her videos become part of her personal installation art? How do instruments she played become her sculptures?

We can debate how great Björk’s music is. Personally, I find her voice grating, and her music only as innovative as it is also commercial, in which case all of the innovation is limited by the casing of the commercial enterprise and paradigm. As far as popular female singers are concerned, I’d rather listen to P.J. Harvey, Joanna Newsom, or Laura Viers (or Olga Bell if it doesn’t have to be commercially viable). I’d much rather listen to the experimental electronic duo, Matmos, who Björk collaborated with on a couple of her albums, and toured with. I don’t find her music particularly experimental or “radical” relative to musicians like Matmos, or even Fischerspooner, which is why claims to Björk being avant-garde are typically qualified with the word “popular”. The most popular avant-gardist is kind of like being the poorest billionaire. You may disagree about her music. You are entitled. It may be a matter of taste. But, that’s not the point. The point is that it’s music.

Björk is a musician. And, yes, folks, it IS terribly odd for a musician, no matter how good, to have a show at the Museum of Modern Art. It isn’t about collaborative creative efforts (which already reach a far, far greater audience through television and radio than any “visual art” ever has), because ALL successful popular musicians have creative music videos, CD covers, and costumes. Is anyone familiar with the spectacles Genesis used to put on in their performances of the 70’s? One could easily make a case that a retrospetive for Genesis is as deserved as one for Björk, and much longer overdo. But, guess what, even if Genesis’s early music [before they went commercial] was much more experimental than Björk’s, it isn’t as well known, or popular. And if MOMA DID decide to recognize the contribution of Genesis, Lou Reed, James Brown, Aretha Franklin, or popular artist of your choice, there’d be a backlog of retrospectives of retroactively designated multi-media avant-garde artists to last decades.

Look, I love a lot of popular music, and much more than I love contemporary art. In fact, when I was in art school my litmus test of whether or not I thought a given piece of art was really any good was whether or not it could honestly compete with my favorite music. I knew Kasimir Malevich’s “Suprematist Square” didn’t mean as much to me as Zeppelin’s “Whole Lotta’ Love” (for the guitar riffs alone). However, even if MOMA did an exhibit devoted to my personal favorite underappreciated and commercially reviled progressive rock band, Gentle Giant, I’d still object, because it’s music, and has its own venue.

Sure, I’d have no problem with this show being in a “Museum Of Modern Music”! Absolutely none. Fantastic. Open the museum.

While I love music, I also love art. But, If you are a traditional visual artist, say, a painter, your work will not recieve a music video award, it will not be seen on TV or played over the radio, and you will not have a show in an auditorium, concert hall, or stadium. You will not have access to popular media. Formerly you could hope to be shown in a gallery, and if you were exceptionally good and really lucky, in a museum. Now you have to compete with all of pop music to get a showing. It’s not a question of high or low art, but simply of medium.

I think Bob Dylan has made music on a par with the best composers of the 20th century, however, I’m not impressed with his paintings. Nevertheless, we can now easily use his status as a musician to tout him as a world class visual artist, because, well, he had album covers, posters, and whatnot. Same goes for John Lennon and his art. You can now be both a second or third rate visual artist AND automatically better than any other visual artist, if your music is successful enough. You don’t even have to be a first rate musician, because popularity is more important than quality at this particular juncture.

Showing Björk paraphernalia and music videos at MOMA signals the eclipsing of visual art by popular, commercial culture, fashion, and celebrity. Now, all pop musicians are classified as contemporary visual artists. Everyone else need not apply, because they can never compete with the celebrity status or popularity of pop musicians, who are already famous through TV, radio, music video awards, and endless publicity opportunities. If you want to be a visual artist, the best thing you can do is make music (and it had better have popular commercial appeal, and not be too challenging or experimental, or you’re screwed). Obviously the same goes for poets. Call Björk’s lyrics “poetry” and all poets must throw in the towel.

MOMA has shown that what makes art great is clicks (and if you don’t agree you are a “hater” and “too negative”). Dumbing down is complete. Stupidity is our permanent condition. End of story. ~ Ends