The first thing to know about this piece was that there was a prior, completed, black and white version. And let this be a lesson to me, and perhaps to some other artists who may work in similar veins – make sure you are going to stick with your B&W composition, otherwise you will be putting yourself through a world of revision hurt. It’s just wildly impractical to do what I did, which was to revise almost everything. It was good practice, for sure, but hopefully I’ve learned from my mistake this time (it’s not the first time). I only intended for this to be a quick exercise in coloring a black and white image, and it ended up being a much more ambitious new digital painting requiring lots of technical know-how that I didn’t already have.

One of my big weaknesses/strengths as an artist is I won’t settle for good enough. If I think I can take a piece a little further, but it will take another 10 hours to complete it, I’ll attempt to improve it. And if I see a mistake, it will annoy the crap out of me. When working with physical mediums you don’t have much choice, after, let’s say, the ink dries, but when you work digitally there’s no excuse to not go back and tweak something out. In the end, most people won’t notice the difference, will prefer the earlier version, or someone’s hastily scrawled unicorn. It’s still worth doing though because I will have more skill for my next project. Come to think of it, this was intended as practice for a more ambitious piece (in terms of content) that is still in the B&W stage.

This piece was hard, and not just because I broke the cardinal rule of veering from my B&W structure. In this kind of image one has to deal with just about every aspect of visual art: the lighting, perspective, modeling, composition, surface texture, balancing of colors, interrelation of forms, and of course, coming up with my own machines/creatures (not to mention using a drawing tablet, and mastering the programs I’m using).

In more abstract pieces, for example, I don’t have to worry about lighting, perspective, or modeling forms in 3D.

And when I’ve worked from life, or photos, I can render complex perspective (like foreshortening), lighting and shading, anatomy, and so on, but I don’t really need to understand it: I only need to be good at copying what I see in front of me, and basing modifications off of that.

So, my current piece required a full range of visual art skills. Incidentally, I think it’s really good to attempt different approaches and work on the skill sets that they require/emphasize. It’s kind of like learning boxing, Kung fu, and wrestling. In the end you can combine the styles and advantages of each to come up with something that is strong in all the elements. I’ve thought for a long time that the Abstract Expressionists, including Pollock and de Kooning, would have benefited from doing weekend landscape oil painting as a hobby.

This piece started off just drawing with no preconceived idea. This is a standard technique I use often, just to create something I would never have thought of before hand. It’s extremely process oriented, because only through the process can the image emerge. It is not, however, an efficient method, and can get me in a lot of technical difficulty. When a space ship of some sort emerged, with mechanical legs, this necessitated I be able to render reflective metal. I had to look up how to do this online, went outside and made sketches of my balcony railing as practice, and used trial and error to fudge the effect I wanted.

And then when I found myself in the land of sci-fi, I had to be imaginative. What does an alien mechanical/organic eye look like? I needed to come up with my own design. I looked at mollusk eyes, gecko eyes, and waited for a vision to materialize. I finally put a luminous mechanoid eye behind a clear, cellulose-like cup.

There were other parts that gave me a lot of trouble, like the angles of the top and bottom of the vessel in front. I wanted to make a material that was like glass and metal, and also had veins in it, and it needed to look convincingly like it had been broken. Below is a gallery of some more of the details. 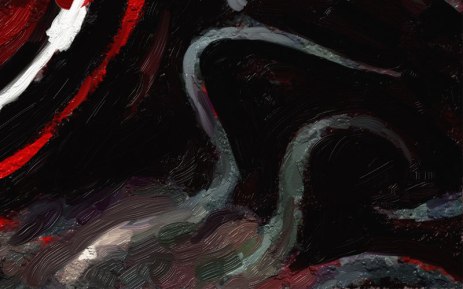 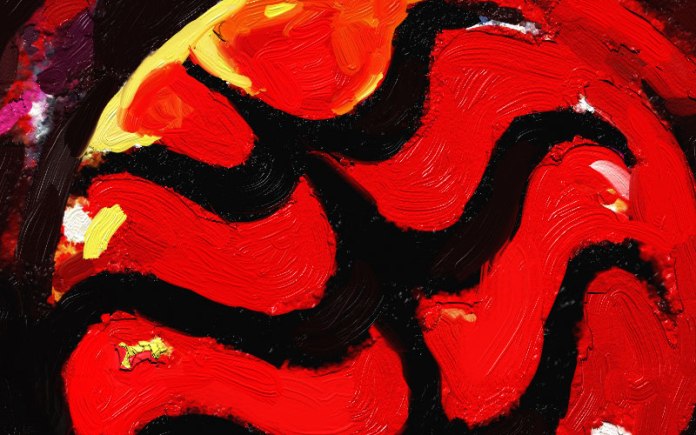 Part of the meaning is just what it is. It’s an image, and making an image as fine art is itself a statement in 2015. There’s a bit of a battle in the art world, and this kind of artwork is categorically shunned on principle as dead on arrival. Really a lot of people believe that passionately, and billions of dollars are invested in the paradigm of art that insists this practice is untenable, that imagery is the enemy of art. It should be kind of obvious that believing imagery is anathema to art is about as rewarding as thinking songs should not be recognized as legitimate music. Obviously I disagree, as do many people who have a love of visual language, imagery, and who hunger for new fine art images. We see imagery as the core of visual art, and find the real challenge not in doing something that has nothing to do with it, but rather in trying to add something new to existing imagery, and to the tradition of making it. So, it’s a statement that an individual anywhere in the world can use his or her computer (or traditional mediums) to make an image that could be meaningful fine art. You don’t need to be rich and have a powerful gallery connection to compete. You just need to make the art, and whether or not it gets any recognition from the art institution is a secondary consideration. Each time I make a serious new image it’s like going to the plate, and trying to hit one out of the park, or else to just get on base so I can get another chance to hit one out.

This specific image developed into being my loose interpretation of the of War of the Worlds. “The end came swiftly” is a line from the end of the 1953 movie version, which made a huge impression on me when I was a boy. After the Martians had nearly destroyed the human race, they succumbed to deadly infections caused by exposure to a bacteria in our atmosphere. All around their ships began to stop and fall… But that interpretation isn’t that significant. It would be better to pan back and just see it as a hybrid sci-fi image/fine art painting,/abstract composition. It’s difficult to restrict it to a highly specific reading. I see it as a battle, in which there is a lot of evident damage. Death is imminent. You are looking a the eclipse of the Matian, and into the dying Martian’s eye!

And maybe the most important thing is that through creating an image that is distinct as a window into another world, I am able to create a world (which happens to be an externalization of my inner psyche).

One thought on “The End Came Swiftly: details, process, commentary”