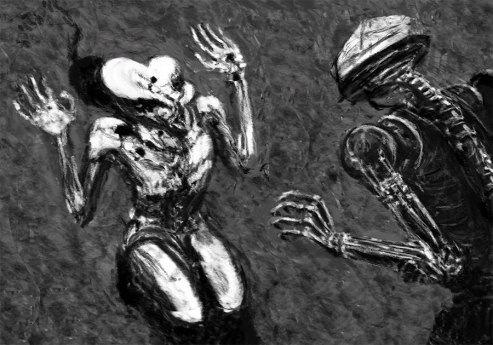 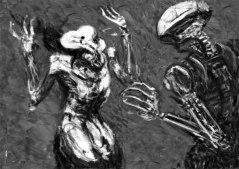 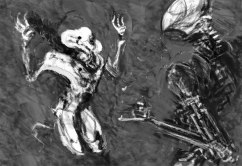 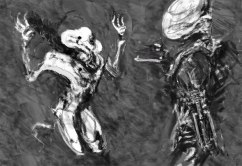 Above: series of stages in development of image in process. Goes from most recent to earliest.

I’m not that keen on sharing works in progress. But it might be interesting for some people to see how my work evolves (in the case of this style). It’s really an organic process, and I almost never end up with whatever it was I set out to achieve. This one is starting to come along to the point where I can see that it MIGHT work. Here I have a concept that I plan on sticking with, which is the Excessive Use Of Force, as in law enforcement, and on the battlefield. But I don’t know what the final result will look like. At this stage it’s only apparent that there will probably be two creatures, and the standing one shooting the one on its knees pleading for life. Further, the standing one is mechanical, and the sitting one organic. You can easily guess topical news stories that are entirely relevant.

The figures at this stage are fairly amorphous so anything or everything about them could change quite a lot. It needs to have the right balance, movement, feeling… It’s a long way off at the moment, but shows promise. I may never finish it. Or it may end up being a full-blown color digital painting.

I’ll be adding to this as I go, in which case the commentary above only really applies to the first few in the series. I’d also like to help counter the idea that my digital art is just the result of pushing buttons or something, or that the computer does the hard work. You can see as it develops that it’s mostly drawing, and process intensive.

One thought on “EUOF: Early stages of work in progress”