Recipe for a “Seafood Spaghetti Sunday”

“It looks like something a nut-job with indigestion painted in his garage after dropping acid and channeling the ghost of  Van Gogh (drunk on absinthe), or some shit…”

What the hey is “Seafood Spaghetti Sunday” all about? First, it looks like a painting, but it’s not. Not in the traditional sense, because no paint has been harmed in the making of this image. It was rendered digitally, but each stroke was drawn individually with a drawing tablet, usually over and over again. It’s not a trick, a gimmick, or a filter. It’s a rather convoluted process I developed on my own to imitate the thick impasto paint of artists like Van Gogh. Check out the detail below, at approximate print size.

You probably wanna’ take a gander at the spaghetti.

…and the bottom of the glass is particularly Van Goghian.

I work zoomed in closer than print size, and tried to ensure that it looked good even at actual pixels. Below are a few close-ups at screen resolution. 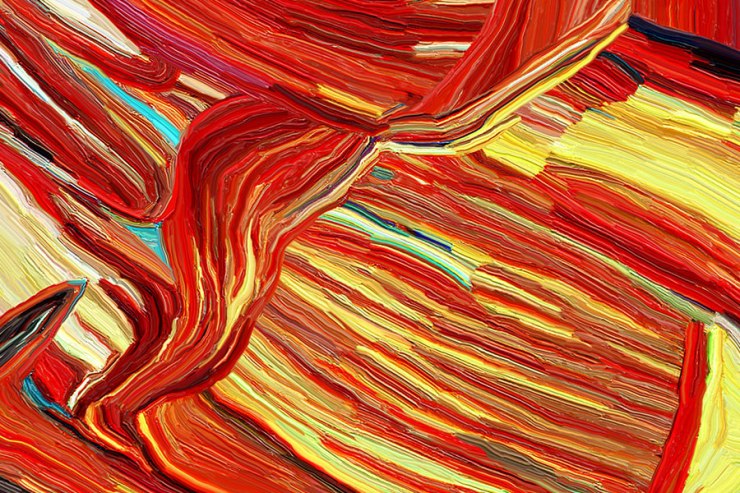 Vincent isn’t the only influence. It started out as an experimental tribute to Francis Bacon (more about that later), and still is to a degree, even if it was branded with other influences and my own unique sensibility. There’s some Picasso in there. It smacks of the Simpsons (ex., Barney Gumble beer-burping).  It’s reminiscent of The Fly. And it brings me back to mind those old trading cards by Ed “Big Daddy” Roth, with monsters driving hot rods.

The influence of Picasso (I didn’t happen to look at ANY Picasso while working on it) – as in the anatomical distortions and suggestions – is fairly apparent in the images below.

The brushwork is conspicuously indebted to that of Van Gogh.

The kind of brushwork that Vincent developed – and which has had a significant impact on my artwork – is nicely reproduced here in this detail:

[Yeah, I can’t stop looking at the painting above. Trying to approximate this style digitally just makes me dig the original source more.]

However much Picasso and Van Gogh’s influence crept into my piece, the artist I set out to do a work in-the-manner-of was Francis Bacon. Can you see some of the overlap in the following images?

The similarities include the flat plane of color in the background, the swirling of paint over the visage, and the suggestive rather than literal depiction of limbs and appendages.

Bacon, in turn, was heavily influenced by Van Gogh (and Picasso, for that matter), and made several tribute paintings to him, which are among my favorite of his paintings.

I even made a video to help people appreciate my piece. Check it out. It’s cool. And I uploaded it in high resolution so you can select HIGH DEFINITION and full screen mode on your player to see it in maximal beauty! Hang in for the close-ups. Also the music I chose is very appropriate and cool.

13 replies on “Recipe for a “Seafood Spaghetti Sunday””