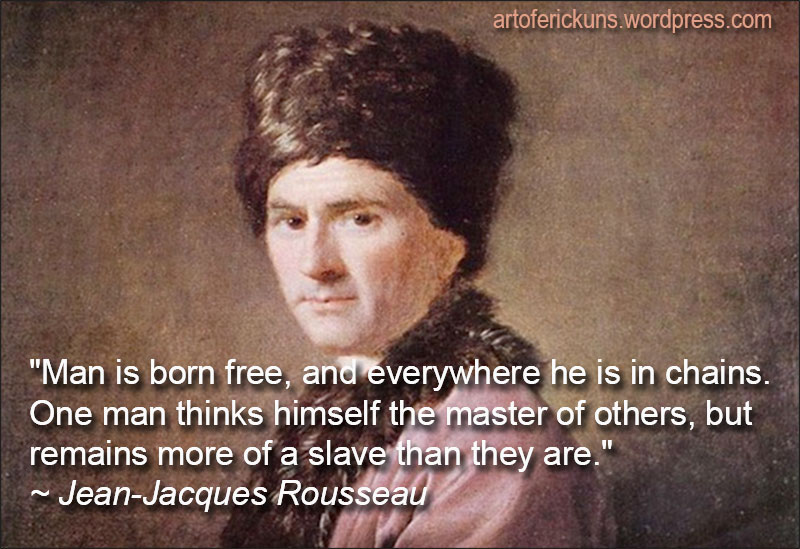 I know, we’re all sick of graphics with one-liners, but I was listening to a philosophy lecture and Rousseau’s words struck a chord. Here is a quote with some grit. It’s the type of statement we’ve heard so many times that it has become meaningless, like a song we’ve heard since we were children and so we’ve never bothered to listen to the lyrics. But this time the message hit home.

I was walking through an alleyway when it suddenly struck me how odd it is to be a citizen of a country, which means I am owned by that country. And one isn’t really owned by the country, but by a select group of other people who are in charge. I must follow rules I had no voice in creating. There are such things as unjust laws. In reality the system is pretty much rigged at this point to squash me. But I was born without all those entanglements, for an instant, and then I was ensnared for life. There is something in me that is still free and rejects that.

I may follow the rules only as far as I am compelled to, but can have my own thoughts, opinion, and conclusions about what is truly right. If you are familiar with Antigone by Sophocles – in which the protagonist, Antigone, breaks the law set down by the ruler of Thebes that she cannot bury her brother, but must leave his dead body outside the city to rot and be eaten by animals – then you know that the struggle against unjust law, and appeal to a higher or more rational law, has been around since at least four hundred years before Christ.

Imagine, for a second, being the pilot of the Enola Gay, and having the presence of mind and the integrity to refuse to drop the nuclear bomb on Hiroshima. Sure, he’d have been court-martialed, but imagine the stand he’d have taken for humanity. Of course the pressure to follow through with the order would have been overwhelming, and the real pilot may have had no grievance at all, but I like to imagine the possibility of being in his position and having the strength to refuse to comply.

We can get out of line, and stop following. At least, to the degree we are forced to comply with a corrupt system, we don’t have to believe in it. Which reminds me of the story of Dith Pran (who you will know of if you’ve ever seen one of my all-time favorite movies, The Killing Fields), the Cambodian reporter who survived the reign of Pol Pot by pretending to be an uneducated taxi driver. He did what he had to in order to survive, but he never drank the proverbial Kool-Aid. He had his own convictions and endured four years of hard labor, torture and starvation before the Khmer Rouge were overthrown by Vietnam.

I’m meandering a bit, but the point is the feeling of freedom, and why one likely isn’t free. We are told in American that we live in the “Land of the Free”, but that’s little more than thinly-veiled reverse psychology these days. We don’t have debter’s prisons or indentured servitude any more, exactly, but when citizens have to work two jobs just to make meager ends meet, live in debt, and the difference between the rich and the middle class is greater than was that between the aristocracy and the serfs, it’s only really our technological gadgets that fool us into thinking we aren’t bound to a life of endless work in exchange for the privilege of working endlessly.

At the moment I’m probably as free as I’ve ever been, because I’m taking a year off and working on art. I even have the time to think about freedom and inquire of myself why I don’t truly feel free, which I don’t, yet .

Any advertising that may appear has nothing whatsoever to do with me.