A pencil and marker drawing of You tube prankster Ed Bassmaster wearing a hairpiece, fake teeth, and a ridiculous expression, at the instant his DMV photo was snapped, as taken from his hidden camera. What separates this from fan art, you may be wondering. One is that if you Google “Ed Bassmaster drawing” you will come across this drawing. There don’t appear to be others. So, it’s fan art apparently nobody else thought to do, as compared to Johnny Depp in Pirates of the Caribbean. If nobody thought to do it, at least it’s not a whopping cliché. Here’s the link for the video: How to Get Your Picture at the DMV

It’s also a bit less shallow. It’s not about how good-looking the star is. It’s the freaky thing of what he’s actually doing, that this isn’t acting, and that it’s a drawing of a picture of a picture being taken. It’s also a look at popular internet culture, which is a subject of “contemporary tableaux” that I’ve been thinking about.

I could have traced it and attempted a photo-realistic depiction. What would be the point of doing that? I could hire someone else to do it and it would look the same or better. So, I decided to do it all by eye, so that there are distortions and imperfections. This is something a camera can’t do. I wanted to reinterpret and transform the image into a pen and pencil drawing that was a bit of a caricature. 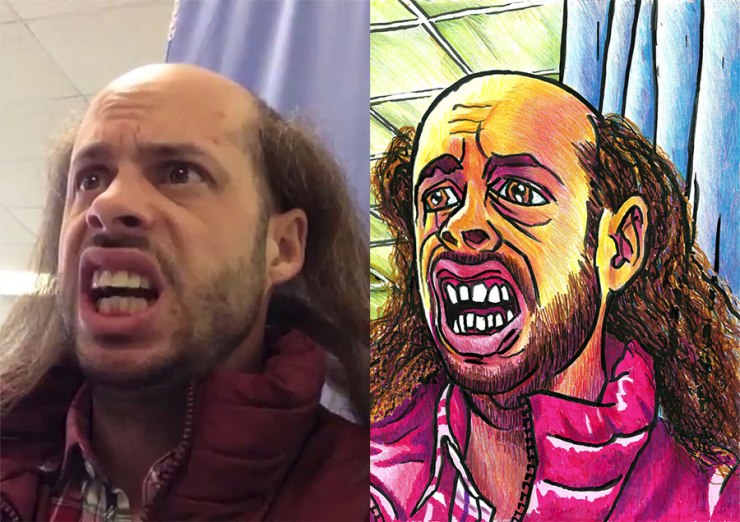 For whatever reason people can block out digital images, or reject them categorically as somehow done by the computer and not a person (this is NOT the case with my digital work, most of which includes a lot of hours of drawing with a tablet). But it is harder to dismiss a drawing, because its mechanism of creation is obvious. Everyone can make them to some degree. There’s no trick to be suspicious of.

I have some more ideas about drawing I’ll share later. But, in case I forget, it’s a simple, direct, and cheap means of making art that just about anyone has access to, and can compete at as in a sport. What can be done with just a black pencil and paper? Are our greatest artists up to taking a challenge of doing something original with just those things, or are the mute when they don’t have millions of dollars to hire others to make things still other people designed?

Drawing is for artists a sort of gauntlet. Can you really call yourself an artist if you can’t make a good drawing, can’t use simple tools of visual language to say anything visually? This is like being a composer who can’t write a song for acoustic guitar, or piano.

I’m interested in the challenge of drawing. Let’s see what I’ll come up with. Next up is an all pencil drawing. Stay tuned.

The original goes for $415. [You email me using the form below and pay through PayPal, then I ship it to you in a cardboard tube.] Of course you can always get postcards and prints.

WARNING: If you don’t want to endure the self-promo stuff I have to do to try to keep afloat, stop scrolling now. Content here is always free to you, but if someone wants a print, or to help out, I need to make that possible. I also offer prints for a minimal profit above production costs. In other words, they are inexpensive.