Monthly round up – Month 4

I’m surprised at how little money I lost last month, less than $400. Most of it goes for rent, and my ongoing visa. I had to make a one-day trip to Burma – what we call a “border run” – to activate the 60 more days on my visa, after which I have to go to immigration to extend for another 30 days, and then I have to do the expensive trip to Laos to start the whole 6 month process over again. My actual rent, utilities and internet was less than $250. This is how I am able to live on about $500 a month, and dedicate myself to art, for the time being.

In the financial realm last month included my first donation that was not help from my parents. A good friend from New York, who I haven’t seen in at least 6 years, donated $50. He didn’t tell me, I just saw the contribution in my PayPal account, and his name next to it. This kind of support is really good, because it helps extend how long I can keep working without having to get a job. Trust me, my kind of art is harder than any job I’ve ever had, so it’s not about being lazy, it’s about doing something meaningful, or at least potentially meaningful. That donation bought me 3 days.

I’m not sure how possible it is that I’ll be able to continue making art, writing art criticism, and blogging beyond the one year mark. I only need to come up with $500 a month, but that’s quite difficult when I sell prints for only a bout 10% above production costs. Yes, if you buy one, 90% of the money you spend is just for the materials. In an art documentary, someone stated that an artist would rather sell one piece for a million dollars, than a million copies for $1. I’m the opposite. I’d rather a million people had quality reproductions of my art, that they enjoyed, than one person had the original tucked away somewhere as an investment. An advantage of working as I do, in PhotoShop, is that people CAN have high quality prints. I think about it more like a band selling CDs than someone making a priceless, one of a kind object.

The alternative is to sell limited editions in order to create scarcity. Even Marcel Duchamp created limited edition ready made urinals, so that he could sell them for high prices. It seems a bit arbitrary. But I COULD stipulate that I will only make 5 or 10 prints of something, and thus turn them into investments. I’d really rather not. I think my pieces make really cool posters, and other than for financial reasons, I’d rather some regular people had one of my posters on their wall, than a billionaire had an original tucked away in the hopes that I die a tragic death and it goes up in value.

Last month I made 6 new pieces, and am nearly finished with a 7th. The 6 pieces were the experimental, abstract compositions composed of hundreds of layers of text. They don’t really fit in with my more painterly looking works, so I don’t take them as seriously. They are a bit innovative though, can be printed out to any size, and might appeal to people who are put off by some of my harder or more controversial content (like the bloody fighters, or the human fly barfing on his donuts). I like abstract art, but personally feel figurative art is more challenging and interesting. The 7th piece is in the painterly style, and you’re going to be surprised by it. 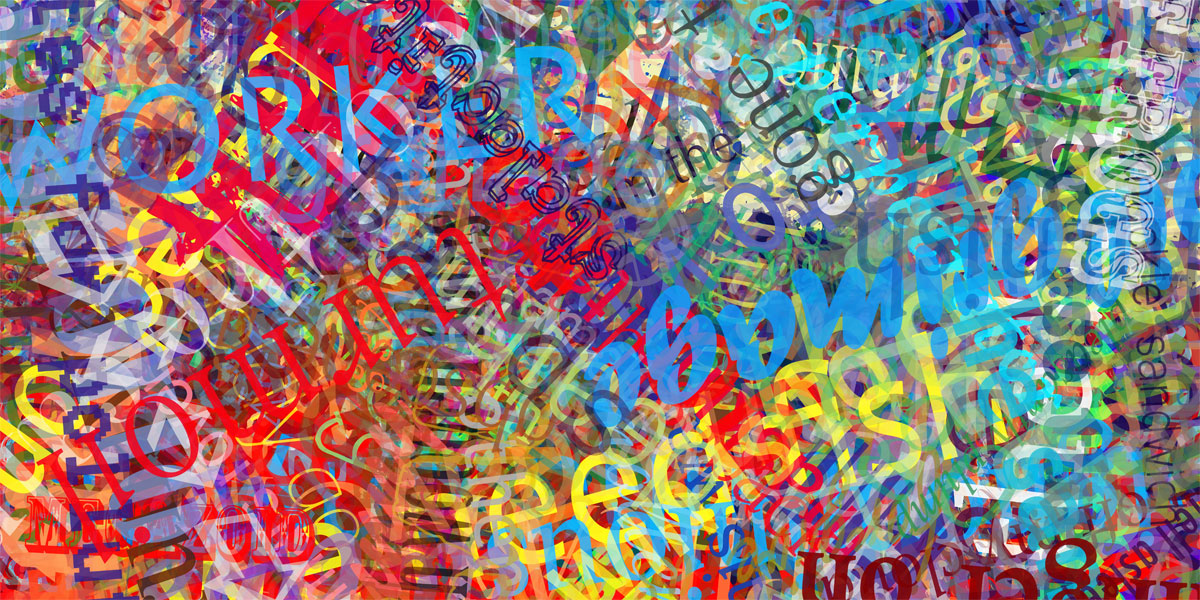 Art criticism is a dying breed along with independent journalism, and for much the same reasons. The rich and powerful have increased their advantage over the rest of us to the degree that not only do they not want to endure criticism of themselves; they can overpower, squelch, or marginalize it out of existence. It’s not really that complex. If you own contemporary art pieces that you bought for tens of millions of dollars, you don’t want critics making persuasive arguments that the work is in fact superficial tripe. What you want is “critics” who know how to promote artists and shows: to inflate tripe into the Holy Grail. As the older generation of serious art critics die off, they are replaced by cheerleaders for the art acquisitions of the ruling elite, just as news anchors have become opinion-less puppets reading scripts that help substantiate the stolidity of their corporate owners.

I don’t consider myself an art critic, but, because art criticism is harder to come by in the mainstream media, if I want it, I need to supply my own. As a result, I happen to offer an alternate view that doesn’t have to answer to commercial interests. David Hockney had an exhibition in 2012, the poster for which advertised, “All the works here were made by the artist himself, personally.” This was rightly seen by the public as a criticism of Damien Hirst, who has assistants make his paintings for him. Rather than let this debate escalate, Hockney’s gallery issued a statement on his behalf that he had not criticized any fellow artists.

I don’t have to wear kid gloves or pull my punches. It’s not about putting down this or that artist, but rather gaining a clearer understanding of art, as opposed to just meekly accepting the jargon surrounding the marketing of big name artists as art history itself. There’s something wrong with the dominant model of contemporary art which alienates most people from it. Not only has it become the playground of the ultra rich, art history has been written and rewritten to foster a belief in a linear progress of Western art that favors American art. The whole progress may be apocryphal, in which case new styles celebrated as furthering the river of culture may just be frivolous and irrelevant tributaries leading to dead ends.

Right now I’m trying to understand the role of the ultra rich in the art world. I don’t really care about the marketplace, but I do about what art gets created, seen, and becomes a part of our personal lives, imaginations, and interiors. The influence of the ultra rich to promote certain work which favors their own sensibilities appears to be corrupting and crippling contemporary art. I’m in the midst of a long article about this, which I’m breaking up into parts so I don’t end up with an overwhelming post that nobody will read.

Part 4, about Damien Hirst is on its way, and part 5 will be the conclusion. I’m interested in how contemporary art (with it’s astronomical prices at auctions, and art fairs for the elite) has come to reflect and substantiate the values of the ruling elite, and in so doing to possibly become a negative social influence. If it boldly goes in a new direction, it isn’t necessarily a good one. Not all progress is good or progressive. One only need to think of Fukushima or genetically modified seeds to see that. We tend to favor all art as automatically good because it is creative and free speech, but this free speech includes white supremacist punk bands, misogynist rap bands, Nazi architecture, and other culturally backwards messages. I’m examining whether some of the art which is considered the very best and most valued is not only bad, but subtly pernicious. Stay tuned if interested.

I also wrote a couple pieces in support of other artists. One was to defend Glenn Brown against an attack that appeared in Scientific America, and was echoed around the net. Another was to share some of my favorite work from Deviantart.

I also may have invented a kind of art criticism that involves pranks and imagined art to illustrate the points I’m making. This is just something that spontaneously evolved. A lot of it revolves around fictional art pieces I create myself and either attribute to myself (or my German alter-ego), or to famous artists. An overview can be had in my faux critical article about the German avant-garde artist Erich Küns, which showcases most of my fake pieces, and the very real arguments they make.

Also did a good job of trashing the practice of artists using artists’ assistants (which can be code word for world class expert artisans) to make there work for them here.

At least with my art criticism I’m being honest, and there’s no corporate sponsor to answer to. You are also encouraged to participate or debate me, though I will edit out personal attacks.

WARNING: If you don’t want to endure the self-promo stuff I have to do to try to keep afloat, stop scrolling now. Content here is always free to you, but if someone wants a print, or to help out, I need to make that possible. I also offer prints for a minimal profit above production costs. In other words, they are inexpensive.