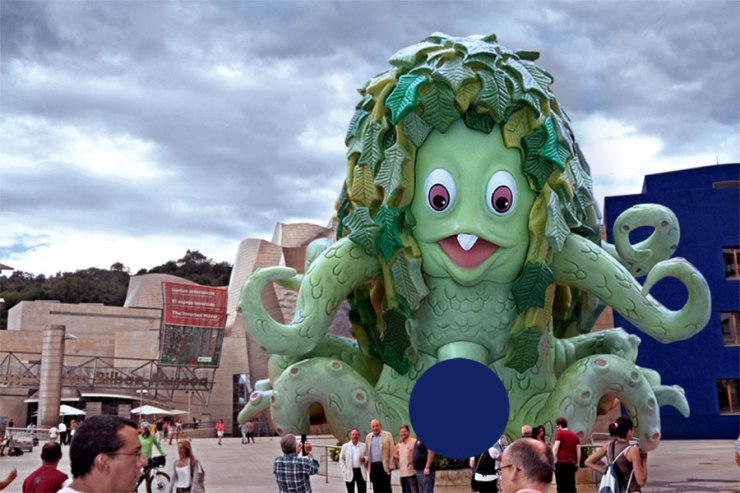 “A 60 ft Sigmund the Sea Monster with male genitals washed up uninvited onto the courtyard of the Bilbao Guggenheim. Unknown artist Eric Kuns masterminded this stunt in an attempt to become an overnight art sensation, but his art-monstrosity was hastily destroyed and removed by museum authorities as litter.”

Above was the tagline for a news article and interview in ARTFORUM, which appeared on their website for a matter of minutes before mysteriously permanently disappearing. Fortunately, I felt compelled to take a screenshot as soon as it was published (see below), and copy-pasted out the text. [Note: I had to censor it because of complaints of full male frontal nudity, but the magazine article contains the original version.]

The text that briefly appeared in the article follows:

A 60 ft Sigmund the Sea Monster with male genitals washed up uninvited onto the courtyard of the Bilbao Guggenheim. Unknown artist Eric Kuns masterminded this stunt in an attempt to become an overnight art sensation, but his art-monstrosity was hastily destroyed and removed by museum authorities as litter. Is this a case of the wise elders of the art world hastily sweeping away worthless flotsam and debris, or is it the murder of an unforeseen masterpiece of contemporary art? We had a video chat with Eric Kuns to find out what he was trying to achieve.

When I first spoke to Eric about the destruction of his gargantuan sea monster sculpture, via Skype video, he was so livid he couldn’t speak without sputtering, swearing, and punching the air. The artist dumped his life savings and a decade of planning into a one-shot attempt at launching himself into art superstardom. When he finally calmed down enough to stop pacing back and forth, I fired off some quick questions to get the gist of the story.

AF: The first question is obvious. Why a giant sea monster?

EK: That was the easiest part. It came about instantly. Someone asked me what I’d do if I had an unlimited amount of money to make any art piece I wanted. I just said the first thing that came to my mind – a 60 foot Sigmund the Sea Monster… anatomically correct. Let’s just say I was with some friends, and we were not entirely sober at the moment. The clincher was the title, “Sigmund the Sea Monster Dong”. Under the circumstances the idea seemed crystalline and hysterical. If nothing else, people would remember the title. That’s the sort of shit that sticks. We were so persuaded in the moment that we made a pact to make it happen. There’s more to it – a hidden meaning about the contemporary art world – with the Sea Monster as the Trojan Horse to deliver it.

AF: How did you construct the piece? It looks thoroughly professional.

EK: It’s something I’d been planning for over a decade, and I wasn’t going at it alone. It was a group effort, and my part was mostly limited to the aesthetics of it. I just happened to have connections to people who had still better connections in toy, plastic, and rubber manufacturing. There were over thirty people directly involved, including a local crane operator, truck drivers, a ship’s captain and crew, and various technicians.

AF: Where did the funding come from?

EK: That’s a secret because I’ve agreed to protect people’s right to privacy, and so they don’t suffer any repercussions. I get all the credit, and all the blame. I was extremely lucky to have very generous anonymous supporters, and one in particular who liked the idea of the piece so much – as a prank alone – that he agreed to bankroll most of it. But I’m still in debt way over my head because it went over budget. I threw everything I had into it.

AF: Why was your sculpture destroyed?

EK: Because it was never commissioned. I just arranged to have it inflated on the grounds of the museum before dawn, without the knowledge or permission of the museum. We spent months planning this. We had our own uniforms and logos made to impersonate an art transport company. One guy went around with a clipboard giving orders. We cordoned off the area with tape and cones, and made it all official. Anyone who saw us just assumed the latest contemporary art monstrosity had arrived at its scheduled time and place. The shit didn’t hit the fan until the museum opened at ten. Once the guys in charge made a few phone calls to establish this wasn’t supposed to be happening, they were irate. They demanded we remove it.  When we refused, because removing it was an eventuality we didn’t plan for and had nothing left with which to do it, they punctured it. It was horrible. Agonizing. We made ourselves scarce to avoid prosecution, and by sundown it was gone.

AF: What a tragedy for the art world. Was it your assumption that if you installed your piece in front of a museum it would then be recognized as worthy of being in that very museum?

EK: That about sums it up. I thought they’d recognize it as the real deal. I say it’s better than a giant puppy made of flowers. It’s way more cool. I seriously thought they’d be blown away by it. I was cynical, but deep down I hoped that they’d see the whole enterprise as art and start applauding or something.

AF: Did they give you any explanation?

EK: Yes, it was all so official. Trespassing, loitering, vandalism, and the real kicker, LITTERING. It was removed as WASTE!

AF: Was there any recognition of your piece as art?

EK: In the beginning there was some argument among the people running the museum, and the main fear was that I would upstage the work they were actually showing. I distinctly heard someone say, “He doesn’t have the pedigree”.  I’m not a member, so I can’t play on this field.

AF: It sounds like they resented you inserting yourself into the art game and declaring yourself a player.

EK: Yes, there is a an art cabal that decides what is important and what is valuable, and breaking into it is like breaking into Hollywood as an actor. You can’t just walk on a movie set and start acting, no matter how good you are. You need to go through the proper channels and be accepted first.

AF: Have you had any critical response to your piece?

EK: Considering almost nobody has seen it, I wouldn’t expect to receive much. One critic got wind of it though, and he was none too impressed. He said I was trying to instill meaning where it doesn’t belong, and that one of my first big mistakes was to alter the original design of the toy. He insisted on absolute deference to the banal object of junk culture.

EK: No, it isn’t. It’s bullshit. Why does something have to be stultifyingly boring to be good? Let’s just say I took contemporary art bullocks in a new direction by using an interesting object and making it more interesting. The argument was just that my piece was too cool, and it needed to suck.

AF: I don’t disagree with you. Why did you give Sigmund a penis? You had to know that was going to cause problems.

EK: That was just the original idea we agreed upon, and we refused to change it. It was stupid, but at the time it seemed like a brand of stupidity that was defiantly intelligent. On a cerebral level it stands for “The Emperor’s New Clothes”. It’s a ginormous monument of contemporary art, but it’s also naked, and knows it’s full of shit. It announces its superficial profundity and deep triviality at the same time. It’s a hoax on high art, and that makes it perfectly acceptable as high art. In addition, I think it invests our animal nature back into the sterile art world. Jeff Koon’s balloon dog is a monument to sterility. My sea monster was virile, hungry, passionate, funny, and real! We can’t have that. Art needs to suck big time. People were loving Sigmund before he was taken down. He was massive. He looked alive, like a god or something. Everyone was taking their picture in front of him.

AF: Why did you choose the Bilbao Guggenheim as the place to erect your sculpture?

EK: Three reasons. One is that it’s a famous piece of architecture in its own right and a symbol of cutting edge modern art. Another is it’s where Jeff Koons’ 40ft “Puppy” was displayed. Lastly, it’s along a river, and that allowed us to bring it in on a cargo boat, which was actually easier than trucking it in.

AF: Were you deliberately trying to upstage Koons?

EK: Why not? If you are going to be a challenger, why not square off against the reigning champion?

AF: Does this make you the Rocky Balboa of the art world?

EK: The Balboa of Bilbao! Sure. I’ll take that.

AF: Keeping with the sports analogy, you made an attempt to hit a home run, and you struck out. What will you do now?

EK: I didn’t strike out, goddamn it! It kicked ass! It kicked Jeff Koons’ ass, and that’s why it had to be popped, carted off, and buried. It threatened the art establishment and their definition of reality. It threatened art commerce. You can’t have some nobody toppling the giants of the art world. It isn’t acceptable.

AF: Are you going to make any more pieces like this?

EK: No. I’ll probably be paying off this one with the rest of my life. My next piece will be a performance art piece. I’ll be working at Wal-Mart as art. Or Burger King.

AF: I’m sure I’m not alone in hoping to see more of your work in the future, whether or not it is gets the recognition it deserves in the art world.

The artwork and the only article about it are gone forever, but there is at least one picture (warning larger uncensored version) here, not including the ones the people present took of each other in front of it.